Looking for the strongest coffee Starbucks can offer ? If a morning caffeine kick is what you're after, then I've got you covered.

I've found and ranked their strongest coffees, so you don't have to scour the menu. You're welcome. 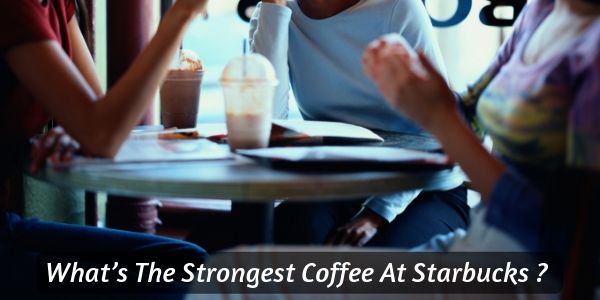 What I'm looking at when comparing Starbucks drinks

Now, you might be looking for the strongest coffee at Starbucks, depending on several things.

I'm going to go by caffeine, and use the Starbucks online menu as a guideline to figure out exactly how much each of those drinks offers to the coffee lovers.

To keep everything fair, I've compared each drink at its 12 fl oz/354 ml capacity, in terms of caffeine. So they're all compared like this, and will also state the amount of caffeine they have for that particular serving size.

For reference, you should know that one shot of espresso from Starbucks is 75 mg of caffeine for 0.75 oz of drink, according to their website.

Onto the drinks, then !

This one is fairly select, and it might not be in every Starbucks store. This thing is that Clover brewing systems apparently make coffee like nothing else in this world, so you're not only paying for Starbucks, you're also paying for premium brewing as well.

It's not exactly espresso, but rather sounds more like an automated, fancy French press kind of coffee. Brews for a specific amount of time, and then is very well filtered and poured into your cup.

Which is more than enough when you're on your way to work and would like to wake up, thank you very much.

Now, you won't always find this Clover coffee available at the store, even in the stores that do have such a machine. This is because the actual coffee beans used in these machines are exclusive as well, and come in small batches.

So, it's kind of a first come, first served thing.

When you do find a Clover in your local Starbucks, make sure you grab a cup, since so far it's the best and strongest.

The Starbucks Blonde Roast might sound a bit odd at first (I only knew of blonde beers before), but it's actually their Veranda blend.

Now, this is coffee that's meant to taste sweeter, less bitter, and more flavorful than their other roast types.

It somehow has the highest caffeine count, right after the Clover, clocking in at 270 mg per 12 oz.

Blonde Roasts are a permanent thing, so you're probably going to find this one more often than a Clover.

It's customizable and goes well with pretty much any flavoring, though it's not espresso. It's brewed coffee, which is part of why its caffeine content is so high.

This is Starbucks' signature brew, and their medium roast.

It's what's probably the most popular brewed coffee, and it's got a very good reason to be #3 on this list of the most caffeinated drinks.

The taste is stronger than the Blonde Roast, a bit more bitter, but still a well balanced and flavored drink.

Again, this one is customizable as well. It comes as a hot drink.

This is their wonderful cold brew coffee. It's been steeped in cold water for hours, in small batches, and as such develops a sweet, flavorful aroma.

What's even better is that it's injected with Nitro, so you're going to get a nice, foamy, velvety cold brew that's just perfect for an early summer morning.

In all honestly, it looks more like a beer than coffee with the foam and slightly translucent like that.

But it just goes to show that coffee can always surprise you, and what you thought you knew about coffee can be turned on its head.

Of course, there are flavored and modified versions of the Nitro Cold Brew, including the next one that made it on this list.

This is the nice, sweeter sister of the Cold Brew, if you can imagine.

It's got sweet cream added to it, which does raise its calories a bit, but the caffeine is still very high.

Caffeine is 200 mg here, actually, so for just 15 mg less, you can get a sweeter deal that the regular Nitro. 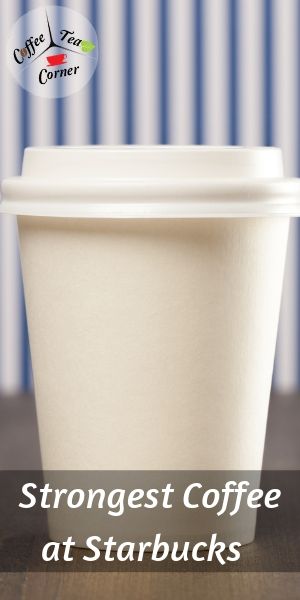 This is the third and darkest of the Starbucks roasts, and it's got more of a punch, flavor-wise.

It's stringer in flavor and a bit more bitter, as is the case with darker roasts.

But still a very enjoyable drink, and one that's going to deliver quite enough caffeine.

It's got 195 mg of caffeine for 12 fl oz of coffee, which is quite a bit. It pales a bit in comparison with the other, monster-like coffees we discussed before.

However we should remember that the humble espresso, which is the base for most Starbucks drinks, is 75 mg of caffeine, so keep that in mind at all times.

Featured Dark Roast is a hot drink as well, so you'll notice that the temperature of the drink doesn't really matter when gauging the caffeine content.

This version of the Americano is strong enough on its own.

The Americano, which is a shot of espresso with hot water poured over it, is a classic drink.

However a Blonde Americano isn't so common, but is now a thing, thanks to Starbucks.

Both the hot and iced version of the Blonde Americano provide you with 170 mg of caffeine for their 12 fl oz of drink.

Apparently Blondes do have more fun.

This is a classic, cold brew coffee the way it was meant to be.

One of the most commonly ordered drinks, and it just goes to show how much people love iced drinks.

It's also a very well caffeinated drink, coming in at 155 mg of caffeine for its 12 fl oz of coffee.

It might sound less impressive than the others, but believe me when I say cold brew coffee is really something else.

And it will get you through the day when summer hits you hard, I guarantee.

It's sister, the Cold Brew with Cold Foam is going to do just as good a job, as it provides exactly the same caffeine level.

This is the classic, what we all know,and it's probably never going to go out of style.

There are a few other drinks at this level as well, like the Doubleshot Iced Beverage, and Latte Macchiato,  but they're less known than the classic Americano.

Yet another cold brew, but this one is sweetened with Cascara syrup. It gives it a nice brown sugar and maple tones, aside from the sweetness.

It seems cold brew made its way into the heart of Starbucks, and has take up all the good spots.

You've noticed many of these drinks are cold brewed.

Well, that's mainly because a longer steeping time allows the caffeine to release fully. But you can't do that with a hot brew, as it would quickly become undrinkable.

So, Starbucks brewing their coffee in cold water for 20 hours (as they say on their site) means there's plenty of time for the caffeine to infuse into the drink.

This also means that most of the drinks most requested in the warm season are going to be cold brews.

This is again one of the classics, and one of the signature drinks at Starbucks.

What's funny is that if you get this iced coffee sweet, it's 120 mg of caffeine per 12 fl oz of coffee.

However, if you get it unsweetened, you get less filler (syrup) and end up with 140 mg of caffeine.

And we've come to the frappuccino, at last.

Iconic Starbucks drink, but apparently one of the lest caffeinated.

This is the simplest one I could find, under the assumption that the other, more flavored versions might cut into the caffeine more.

Fair enough, when you think about how much milk, cream, and whipped cream is in the drink, aside from actual coffee.

After all, only one shot of espresso is used to make a frappuccino, so I guess it can't be less than that.

Still, it's good to have both the frappuccino and the espresso as comparisons for the other drinks Starbucks has to offer.

Now, exactly which drink you order when you walk into a Starbucks is up to you.

But these were the strongest drinks they have on offer, and I added the frappuccino, just in case anyone wanted the classic as well.

You can always ask for a double shot of espresso if you feel like your drink needs it.

« The Three Coffee Waves, Explained For Beginners
Washed Coffee - What Is It, And Is It Better ? »