Home » Coffee Drinks » Beginner's Guide To Cafe Breve - What It Is, And How To Make Your Own

If you've never heard of a cafe breve, don't feel bad. It's not common outside of America, since this is an american take on the classic Italian latte.

So let's explore this creamy drink together, and figure out just what it's all about.

How much better than a latte can it be ?

As it turns out, it's damn good. 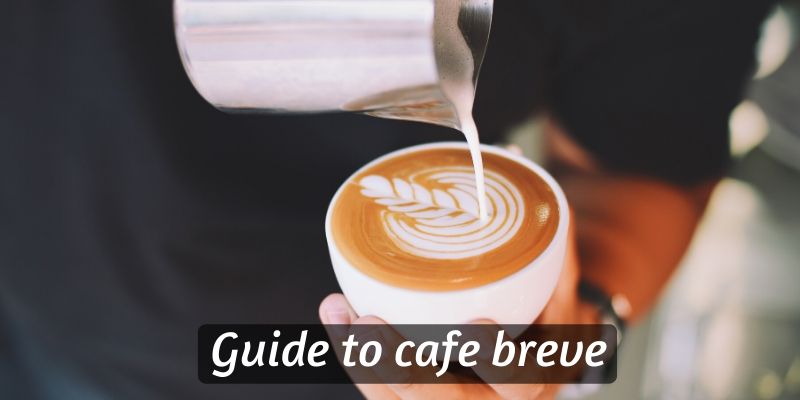 What is a cafe breve ?

Cafe breve is an american version of the classic latte.

It uses espresso and instead of milk, half and half. If you don't know what that is, it's a much heavier, fat-rich mixture of milk and cream.

This results in the cafe breve being a very thick, creamy, glossy-looking drink that just doesn't need any sugar at all. Why ?

Because the half and half in it is so rich it cuts through the espresso completely.

The cafe breve is most commonly known as a latte, but it can be in the form of a cappuccino as well.

In other words, you can find a cafe breve as big as a latte, so 1 oz espresso with 7 oz steamed and frothed half and half. And you can find is as 'small' as a 5 oz/150 ml cappuccino.

It uses half and half instead of regular milk

Why does cafe breve use half and half ?

And why is there such a thing as half and half ?

Well, first we need to understand what half and half really is.

When it comes to milk, we have whole milk, half and half, light cream, and heavy cream.

Half and half is that happy medium between regular milk and light cream, where whole milk was pasteurized with some light cream, incorporating the fat into the milk.

This means the milk is thicker, richer, and definitely fatty compared to regular milk that may only reach 3.5% fat.

Half and half usually ranges between 10 and 12%, but there are cases of 7% fat and that's still half and half.

Using light cream would make some recipes much too heavy, so this is why humanity arrived at the idea if half and half.

You can use it in pretty much everything, not just coffee.

But for the sake of the breve, this is one of the most important uses.

As for why the breve uses half and half and not something else, it has to do with texture.

You see, half and half being higher in fat content than milk, will create more microfoam than regular milk froth. This means the whole drink will become thicker, creamier and generally more pleasing to the taste buds. 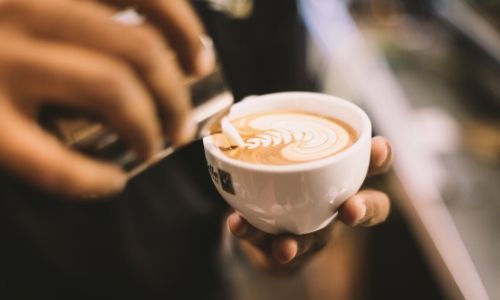 There is a nutritional downside to it

There is a bit of a price to pay for this increase in flavor and deliciousness.

For one thing, half and half is high-fat. This means the overall calorie count is raised by as much as a couple hundred.

Where regular milk is usually between 2 and 3.5% fat, half and half has 3-5 times more fat.

Meaning arteries, cholesterol, and waistlines will be directly impacted.

Of course, just the calorie count isn't what we should be looking at. But this is a high-fat drink, and most often sweetened.

This is one of the most unhappy combinations, since it helps the body deposit more fat than consuming just fat-laden drinks and food.

Add to this the fact that half and half doesn't double in volume like milk does when frothed, and what does that tell us ?

That for 8 oz of latte, 1 oz is espresso, and the remaining 7 are half and half. Meaning about 5 oz will be actual steamed half and half, and just 2 oz (in volume) will be foam. Rough estimation.

Compare that to regular milk that tends to double or triple in size when steamed. 7 oz of milk (in volume) usually mean 2-3 oz of actual steamed milk, and the rest is milk foam.

But I'll leave that discussion to dedicated health sites. All I'm saying is that if you're counting calories or would like to go for a healthy alternative, maybe skip the breve.

Caffeine in a breve works slowly

Another interesting item to note, caffeine is slowed down by sugar and fat.

It has to do with the antioxidants in coffee, and caffeine is one of them.

They tend to work less well when in contact with fat and carbs/sugar, because that's what they (kind of) battle. More on that here.

The caffeine will still work, but much slower and maybe not as great as you may want it.

So, if ordering a breve don't expect a clear wake-up call like you would maybe get from a cappuccino.

However you could order it with a double shot of espresso, and it might wake you up a little better.

In any case, the breve is usually more of a dessert-type drink, rather than 'wake me up before work'.

How did the cafe breve come to be ?

No one is really sure how the breve came into being. There's a lot of assumptions and guessing if we tried to figure it out.

It could be born out of a coffee shop's desire to offer better, more luxurious and creamy lattes to customers.

It could also be born out of a barista's curiosity about half and half - does it steam, and how good is it ?

But I think most folks who have ever ordered it are glad it exists.

How to make your own cafe breve at home

Making your own breve at home won't be easy, because you already have to know how to steam milk properly.

Steaming half and half is a little tricky, due to the high fat content and because you need to look for a different texture.

This is more of a medium-hard drink to pull off, but still something that most folks will manage after a few tries.

So, what you'll need for a successful cafe breve:

Unlike steaming milk with a couple of tricks at home, half and half really needs the steam from an espresso wand to really become creamy.

1.Steam the half and half

This part takes the longest, but most importantly, you have to let the half and half 'set' for a few seconds.

When steaming it you'll need to look for a consistency much like wet paint.

It should be thick, glossy, a bit like merengue but with very soft peaks.

So get your milk jug, and make sure the espresso wand is hot and ready to go.

Fill the jug with as many oz/ml of of liquid as you need - if you need 7 oz/207 ml to top the drink ,then add that much.

The half and half will rise a little in volume, but not very much. The high fat content will weigh it down a lot.

Insert the tip of the espresso wand into the half and half and very slowly move it up and down the length of the jug.

The closer you are to the top of the liquid, the larger the bubbles. We're looking for small bubbles, very tiny, so try and keep it on the lower end.

After the first few seconds of doing this, tilt the wand a little to the side. This will create a whirlpool effect that will do two things.

First, it will help heat the half and half evenly, and let it all pass by the wand and collect steam.

Second, it will help incorporate the bubbles into every part of the liquid.

You should know that you won't get a lot of volume through this.

Instead, you should be looking at the texture of the half and half. It should be thick, creamy, and glossy. 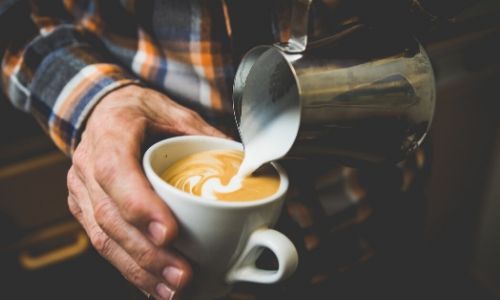 You also don't need to do it as much as with steamed milk, and the exact stopping time will vary according to however much liquid you're steaming.

A lot of trial and error will be necessary.

Once you decide the steamed half and half is done, remove the wand and clean it with a damp cloth.

Swirl the milk jug a little, to better incorporate the air bubbles, and give it a solid tap on the counter. This will release any overly large bubbles that have no business in a microfoam.

Set it aside and leave be until the espresso is done.

2. Prepare your espresso as usual

You know how to make your espresso best. If not, read about it here.

As this step takes the least amount of time, make sure you've got the half and half ready to go when starting with this.

Your espresso should be pulled in the cup you're going to be drinking from or serving the drink in.

Make sure the cup itself is warm before pulling the shot.

Pull a standard shot, and set it aside.

Tilt the espresso cup to the side a little.

Pour slowly from the milk jug, so there's mostly steamed half and half coming into the espresso. Ideally the foam should be very well mixed with your liquid, but if there is extra foam try and hold it back for now.

As the cup is slowly filling, tilt it back to normal very slowly.

At some point, you'll run out of steamed half and half and will have to release the foam.

Do so, while still tilting the cup back to normal. Feel free to jiggle it a little and create patterns, though they won't come out as clearly as with latte art.

Cafe breve is really something else entirely.

It's a latte but it's so much more. It's like a thin pudding, all milky and creamy and coffee flavored but you don't need a spoon for it.