Home » Coffee Drinks » What Is A Cortado And Why Is Everyone So Obsessed With It ?

Most folks know what a cappuccino, flat white, or cafe latte is. That because 80% of coffee lovers drink espresso with a lot of milk.

When it comes to cortado, macchiato, or even piccolo latte, a lot of people are confused. There are lesser known drinks and can really throw people off.

Today we're talking about the cortado and exactly what it is. There's been a lot of hype surrounding it and we need to get to the bottom of this. 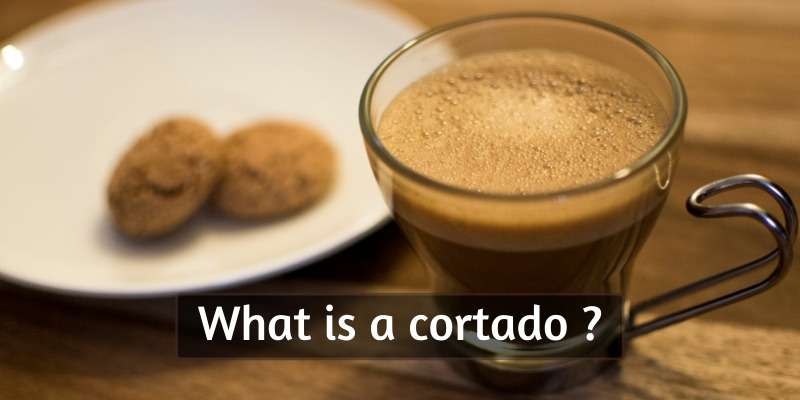 A cortado is a beverage consisting of one shot of espresso combined with an equal amount of hot, steamed milk. That means the ratio of espresso to milk is 1:1.

The milk helps reduce the acidity of espresso, and usually in a cortado it's steamed, but not frothy and texturized as in many espresso-based drinks.

In essence, it's supposed to cut into the espresso, making a softer drink, while still allowing the flavor of the coffee to shine through.

Think of the logic behind an espresso macchiato - the one with a tiny dollop of milk froth on top. The milk is supposed to just take the edge off that strong espresso, but in a cortado the milk is mush stronger.

A very important element in a cortado is the milk. Not just the amount of milk but the way it's heated and the fact that it's not frothy. We'll get to that later in the article.

Several variations on the cortado exist

All that being said, it's important to note that the cortado is one of the most the least consistent espresso drinks you'll ever find, right up there with mocha and iced anythings, and even frappes.

This is because the cortado is a very cultural drink, and as soon as it left Spain folks have started adapting it to their needs.

The biggest change was when it reached the U.S. and the serving size went up significantly. From a small 2 oz/66 ml drink to a 4 oz/120 ml drink and sometimes larger. This is mostly due to consumer demand and different coffee chains competing with one another to offer the best deal.

In Cuba for example the cortado can also be found as a cortadito, which is actually a shot of espresso whipped with spoonfuls of sugar to create a creamy, foamy caramel-like drink that's topped with frothed milk or condensed milk. It's more of a treat or dessert than an actual coffee. 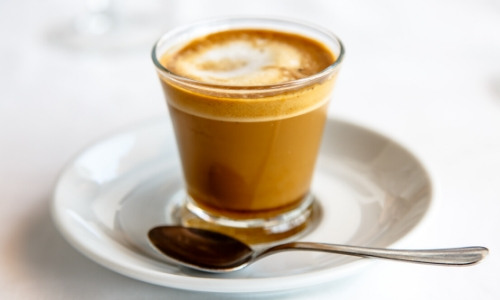 Aside from this, each barista prepares the cortado a little differently, according to what they know would taste best, and also what each customer asks for.

The only constants in all of this are:

The point is that it's really hard to put an industry standard on very cultural drinks, and also the fact that there's just so many espresso drinks now that it gets hard to tell them apart sometimes.

Where does the cortado come from ?

This mild and espresso drink is originated in the Basque area of Spain. The name comes from the verb in Spanish "cortar" which means "to cut".

It is a very popular drink in Spain, Portugal and Cuba. Now it can be found all over the world in various forms. For example, there are some places in Cuba where milk is replaced with sweetened condensed milk.

What is the difference between other drinks and cortado?

What about espresso macchiato? This beverage will always be a single espresso with a dash of milk froth. The milk difference is huge, and you can really tell when it comes to taste.

The espresso shines much brighter in espresso macchiato, while the cortado is much more mellow.

What about piccolo? This beverage that originated from Australia is more like a cafe latte with a ristretto shot instead of regular espresso.

The ratio of coffee to milk is 1:3 and is very mild and milky. So it has nothing in common with a cortado. Piccolo is less strong than a cafe latte and is a beverage with a very little dose of caffeine.

You might think that a cafe latte/cafe au lait would be pretty much the same thing as a cortado. And you'd be kind of right, except the serving size matters here, as does another key element.

Cafe au lait is not always espresso, in fact it's most often a French press or Moka coffee, with an equal amount of hot milk. The milk isn't steamed but just heated.

And the serving size for cafe au lait/cafe con leche is variable since it's a very informal drink but it's always larger than a cortado. 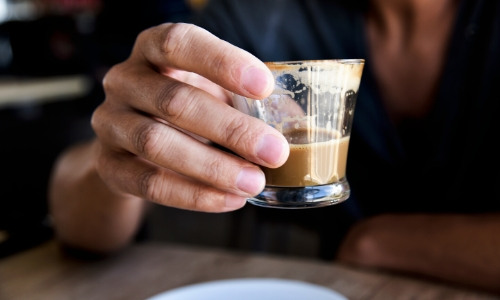 Speaking of taste, a cortado is a coffee with personality. This beverage is soft and strong at the same time.

Because the ratio of espresso to milk is 1:1, you will find the powerful taste of espresso, and at the same time, the smooth and silky taste of milk.

It is a perfect balance between them, and this is what gives to cortado a personality. If you were to compare it to the cafe au lait we discussed before, you'd notice the strength of the coffee is much lower.

Espresso is well known for the strong kick it gives and how often folks prefer to cut it with a little milk, while other brewing methods are a little milder and so is the resulting coffee.

Why the milk in a cortado matters

A very important part in cortado, the milk. Steamed milk, not just heated, and the amount of milk.

Granted the exact amount and ratio of milk will vary from region to region and each barista has their own idea of how much they should put in, but it's always a small amount of milk.

What's really special about the milk in cortado is that it gets that caramelized flavor that steamed milk gets, but without the froth and bubbles. Only a very small layer forms, and sometimes that layer isn't even added to the espresso.

Also very important, cortado's milk is one of the few milks that is full-on 'wet' (think of wet and dry cappuccino). It's pure, whole milk, no air.

Let's say you brew two shots of espresso, one ounce/33 ml each.

One gets a whole ounce/33 ml of steamed milk, like a normal cortado, while the other gets 1 oz/33 ml of frothed milk (like you would for flat white or cappuccino).

The volume/space occupied by the two milks is the same, but the concentration in the steamed milk is much higher.

This is what makes the cortado really stand out, and why more and more people seem to love it. 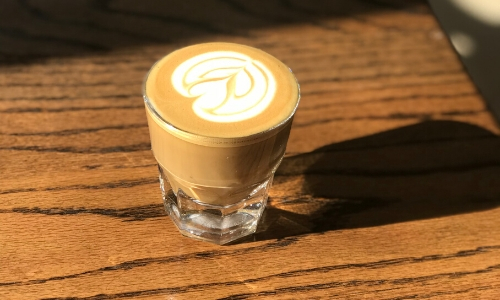 A cortado with just a tiny bit of foam

How to make a cortado at home

There are so many recipes out there. But if we follow the traditional way with a ratio of 1:1, you just need a short of espresso and equal amounts of steamed milk.

The unique thing in this beverage is that it is made in a transparent glass instead of a cup. If you have a tiny shot or a small glass use it ! You will see each layer of your drink.

So brew your one ounce/33 ml of espresso as normal, and brew it directly into the cup you;re serving it in. If you've got that nice glass cup go for it.

Then steam your 1 oz/33 ml of milk and stop right when it starts to form the first layer of foam. We don't need to increase volume, just get it hot.

Add the milk on top of the espresso, and you're done !

If you want to make things more special you could:

Espresso tip: try this recipe with 100% arabica coffee beans. It will be more flavored and delicate.

Cortado seems to be a really good espresso drink that may please everyone. Some some folks may miss the frothy milk that's normally present in cappuccino for example, but they'll quickly fall in love with the caramel-like steamed milk in cortado.