Home » Coffee Drinks » Beginner's Guide To Mocha Coffee - What It Is, And How To Make One

Wondering why everyone's so intrigued by mocha coffee ?

Well wonder no more, because this post's meant to help guide you through the basics of mocha, what it is, how it's made and why it's the way it is.

So let's get started by explaining what a mocha is, and how this all got started. 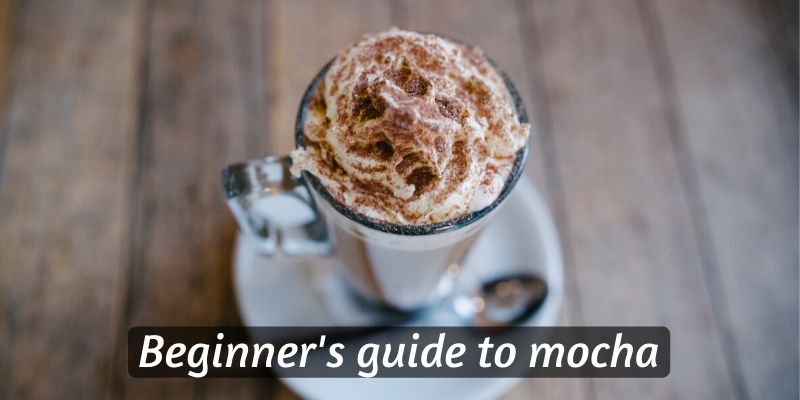 What is mocha coffee ?

Mocha is an espresso-based drink that also requires chocolate sauce, and a small amount of milk froth.

Ideally the drink is constructed by pulling a shot of espresso into a small 5 oz/150 ml cup, and then adding an equal amount of chocolate sauce or syrup to the drink.

Stir gently to combine, and then add a thin layer of milk froth on top.

This ends up being a small drink, often under 3 oz so it might even be served in a demitasse.

However you can also find it in very large sizes, especially if buying from a coffee chain.

But why is the mocha the way it is ?

Who came up with the idea of mixing coffee and chocolate ?

And why mocha and not another name ?

The original mocha is a very old drink from Yemen

Originally the mocha was made in the city of Mocha, Yemen.

Centuries ago this was a very important trading post in the Arabian peninsula. Lots of goods were traded through this city, and one of the most important ones was coffee.

The coffee was usually from Ethiopia, which is right across from Yemen. And the coffee that found its way to the port of Mocha was said to resemble cocoa beans in terms of flavor.

This resulted in Mocha coffee being renowned for being very chocolate-like, at least for those times.

Keep in mind this was happening at a time when chocolate wasn't widely spread, centuries ago.

Time passed on and through some process that isn't documented, actual chocolate or cocoa powder started finding its way into the mocha coffee.

Nowadays the port of Mocha isn't as important as it used to be, but the name stuck. 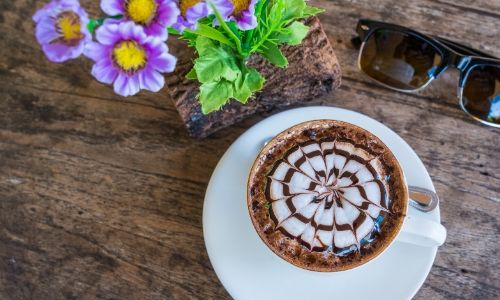 Do not confuse with the Moka

There is another coffee that sounds just like mocha but is in fact completely different.

Many folks confuse the two, and the difference is in the spelling and components of the coffee.

Mocha coffee is the chocolate one we talked about earlier.

Moka is the coffee made in a Moka pot/percolator, on the stove. See photo below for a clearer comparison.

It can sometimes get into coffee Viennese territory

The recipe for the mocha coffee isn't exactly very clear, and sometimes you may find extreme variations of it.

In some cases the mocha can develop into a straight-up Viennese coffee.

If you're not familiar with that drink, it's about 1 part coffee, 2 parts chocolate ganache, 1 part chocolate syrup, topped with lots of whipped cream and sprinkles.

More of a dessert than coffee, and definitely something many folks would enjoy. But not a mocha.

As for caffeine, the mocha is pretty much what you want it to be.

It uses a single standard shot of espresso, so it will have as much caffeine as your espresso can bear.

There is no way to accurately tell how much caffeine is in one shot of espresso without analyzing it in a lab. it all depends on how much Robusta was in the coffee blend, how much ground coffee was used, and how strong the strain of Arabica is.

You can get espresso shots between 60 and 120 mg of caffeine, so there's really no telling.

However if you make your mocha with a double shot of espresso you're doubling the amount of caffeine, whatever that may be. 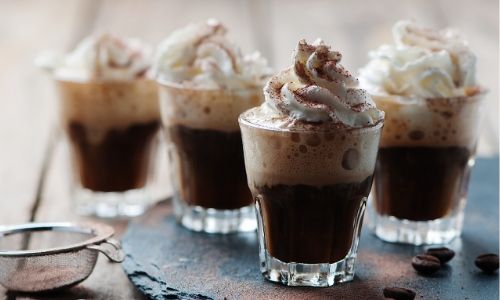 How to make a cup of mocha at home

Making your own mocha at home is pretty simple.

You'll need only a few ingredients. And if you don't have them on hand, you can easily swap them, since the recipe isn't actually that strict.

There is no set rule on how to make a mocha

No one really knows why there isn't a strict set of rules on who to make a mocha, as there is for cappuccino or latte for example.

But there isn't one, so most folks become really creative when building a cup of mocha.

Which can be really nice, because everyone loves getting a little creative and playing with chocolate.

What you'll need for a cup of mocha is:

Next I'll tell you how to combine the ingredients.

Make your espresso just the way you like it.

Keep in mind that this coffee drink is going to be really flavorful, and the espresso is going to stand out anyway.

So try not to brew it extra-strong, there's no need for that.

If done right, the mocha should be a good balance between chocolate and coffee flavor. However you can tip the scales in whichever way you like. 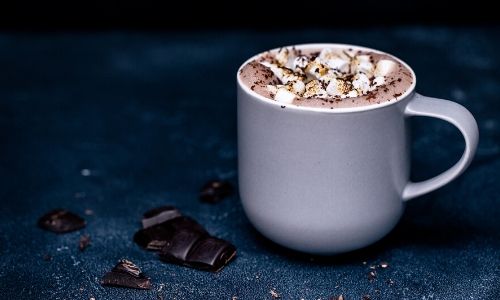 If using a standard espresso shot, then you should use an ounce/33 ml of chocolate sauce.

If you're using cocoa powder or hot chocolate powder, place the powder into an empty cup.

The slowly add in a little bit of espresso at a time, to make a thick paste. This will make sure there are no cocoa lumps in your mocha later on.

As the lumps disappear, smush them with the back of a teaspoon and keep adding espresso until you've got all of it in.

For just one ounce of espresso, you should only half a teaspoon of cocoa powder since that's a little bitter on its own.

If you're using hot chocolate powder you can use a whole teaspoon, because that's usually sweetened and has some powdered milk as well and won't be too bitter.

3. Add a layer of milk froth

After the espresso's been mixed with the chocolate, it's time to add the layer of milk froth.

By milk froth I mean the kind that's not microfoam. It's meant to have larger air bubbles, and won't really melt into the coffee.

If you have a milk frother or wand on your espresso machine then you can totally do this at home, just check here.

Even if you have no espresso machine or wand that link will still explain how to froth milk at home using other utensils.

If you really, really have no way or frothing milk, or don't feel like frothing milk for just a tablespoon's worth, there is another alternative.

You can swap milk froth for whipped cream. You don't need much, just enough to cover the surface of the drink.

But no one's gonna stop you from adding more, are they ?

Mocha is really every chocolate and coffee lover's dream, especially since it's so easy to customize exactly the way you like it.

There is no hard and fast rule as to how much espresso or chocolate you should add, so feel free to get a little creative.