Home » Coffee Drinks » Does Irish Coffee Have Alcohol ? About The Boozy Coffee

You might be wondering if Irish coffee has any alcohol in it if you're driving, or taking medicine. This is a good question, since the name of the drink doesn't really tell you much about its composition.

As is turns out, Irish coffee ends up fitting the stereotype in a way. It's a nice, strong pick-me-up and you'd best not go anywhere soon after. 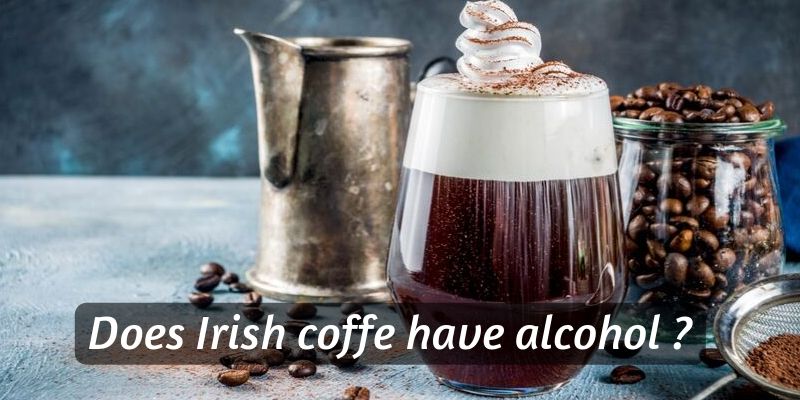 So does Irish Coffee have alcohol ?

Yes, Irish coffee does have alcohol in it. In fact it's got a shot of (originally) Irish whiskey in it, but you can make it with pretty much any amber alcohol.

I doubt it'd go well with vodka, but I'm sure someone's tried it.

I'm not going to write up a full recipe for Irish coffee just yet, but I'll tell you the gist of it so you can get a better understanding of what this hot drink is made of.

For an Irish coffee you'll need:

This ends up being an almost 6 oz/177 ml cup of coffee, and is usually served with a nice dome or peak made of whipped cream.

As for how to assemble it, there is no set rule. Add the alcohol to the espresso, stir in sugar, and top with whipped cream.

Can you use any alcohol in Irish Coffee ?

If you were to use brandy or cognac it'd be a bit different from a true Irish whiskey- it'd miss the Irish whiskey. But, if there is no Irish whiskey on hand any other amber spirit will do.

It won't be Irish coffee, but it'll be damn close.

Something others have tried is to use whiskey cream to add a caramel note to the coffee, and provide a smoother texture. Personally I think this results in a great Irish coffee, but some might disagree.

And, if you're a big fan of cherries and Christmas, then for the holidays swapping the whiskey for some cherry liquor is kind of a nice idea. The bitter, earthy tone of coffee ends up going very well with the cherry notes. Very much like dark chocolate and cherries.

Top with whipped cream, sprinkle on some cinnamon and you've got the best Christmas Eve coffee  you'll ever taste. 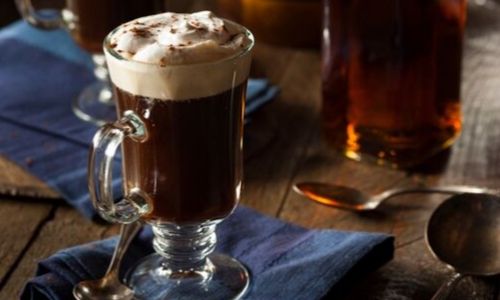 Can you use more than one shot of whiskey in Irish coffee ?

Yes, some folks prefer a double sot of whiskey in the same amount of coffee.

While this changes the structure of the coffee from a regular Irish coffee to a double, it can still pass. Just know that upping the alcohol content might result in a hangover the next day.

Also remember that hot alcohol is always going to go down harder, so it might hit you harder than you expect in a double Irish coffee.

Does Irish coffee keep you awake or make you drunk ?

Since this coffee is made with more coffee than whiskey, I'd say it's going to keep you awake.

The small amount of alcohol in Irish coffee isn't even going to give you a buzz, but it will improve your mood. It might negate some of the coffee's effects, but not enough to confuse your body.

Both coffee and alcohol stimulate the nervous system. One keeps it alert and focused, the other helps relax and lower inhibitions. The most they can do is cancel each other out.

However you should know that you stomach might not take it very well, or you might get dizzy in some cases.

If you drink Irish coffee with a double shot of whiskey then it might just give you a buzz, partly due to the alcohol being hot/warm. Somehow it seems to work better.

But this also ends up tasting like a warm cocktail which isn't everyone's favorite way to drink alcohol. Still, if you're looking for a good time then a double shot will get you there. 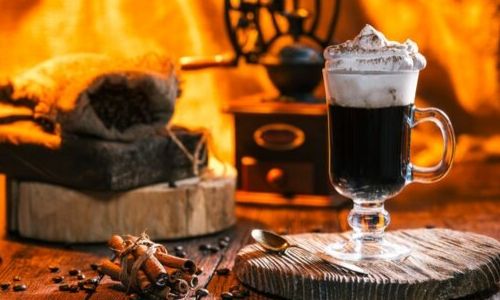 What kind of coffee should you use in Irish coffee ?

This depends on your preference, and what kind of Irish coffee you'd like.

If you're looking for a lighter, more aromatic coffee then go with 100% Arabica coffee, medium to light roast. It'll showcase both the coffee's fruity tones and the whiskey flavor.

Some whiskey ends up being spicy, or very reminiscent of vanilla and fruit if it was aged in former rum barrels. It'd be a shame to cover that up with a harsh Robusta coffee.

But if you're looking for a strong, dark, deep coffee then pairing a Robusta/Arabica mix with an average whiskey is going to get you a great Irish coffee as well. You'll mostly feel the coffee, which is a nice save if your whiskey isn't the best.

If you're using aged whiskey, the one you've been keeping in the cabinet for the past 15 years, then go with a pure Arabica coffee. It won't cover up the flavor of the whiskey, and it'll just provide a nice base for the alcohol.

Irish coffee isn't for everyone, but those who do like it are absolute fans. There's just something about the warmth of a great coffee, with a show of whiskey that makes everything just that much better.

And since it does have alcohol in it, you should be mindful of where you're headed after drinking this coffee, or what you've got to do for the rest of the day.

Don't drink Irish coffee and drive, or if you're under medication, and especially if you're pregnant or breastfeeding.