When looking for a great brewing method, you'll also want to know how good your coffee will end up.

But does filter coffee taste better ? Better than all the rest ?

Many people swear by it, and it's one of the most popular ways of brewing coffee. 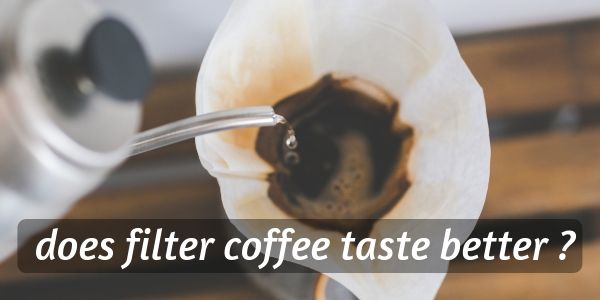 So does filter coffee taste better ?

It depends on what you're comparing filter coffee with.

But as a whole, I would say filter coffee does taste better than almost all other coffees, except French press.

Filter coffee allows the coffee bean to release everything it has, and provide a very flavorful cup.

It's also the cleanest (no debris) cups of coffee possible, and you'll be very happy with it.

I have a drip filter machine, and am very much in love with it.

Before, I made coffee Turkish style, and that's great too, though it's a wholly different taste.

Right now though, I wouldn't part with my filter for anything.

What makes filter coffee great in the first place

One of the best things about filter coffee - we won't tough on convenience here - is how much more flavorful it is.

Now, espresso fans might disagree with me and that's alright.

I say espresso because most of the coffee people drink is either espresso or filter, and espresso absolutely dominates coffee shops.

It's easy to work with, and quick.

But filter coffee is the star of the show today, and I think it tastes better than pretty much any coffee out there.

Except French press, of course, but I'll delve into that in another article.

Filter coffee is so precious because of its flavor, which is something that needs time to be released.

In that, steeping coffee for 1 minute, compared to 3 can make a world of a difference.

This means the water isn't rushed or pushed through the ground coffee, which leads to a more gentle extraction of the flavor, coffee oils, and caffeine.

Filter machines have come a long way, and most of the have an anti-drip nub installed.

So if you were feeling frisky, you could simply not put the coffee pot under the nub, thus forcing the water to stay with the coffee for as long as you like.

Now, this is limited by how much water and coffee the coffee basket can hold, so it's something that would only work with 1 cup of coffee.

Back to filtering the coffee, another beautiful thing about filter coffee is that it has no debris at the bottom of the mug.

After drinking Turkish coffee for years, this has been a boon for me.

For you it might matter, or it might not. But know that the filter will trap any tiny particles and not let them seep into your finished coffee.

This also means that you won't get a sandy, powdery feeling on your tongue after finishing your coffee.

And finally, filter coffee provides you with the maximum amount of caffeine that can be released from your coffee.

If you desperately need caffeine in the morning, then you'll be very happy with filter machines. 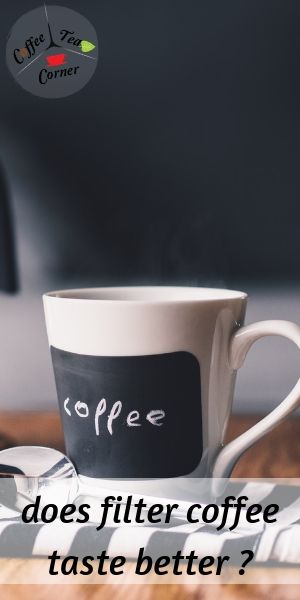 It depends on what you compare filter coffee with

Another thing to think of is that it really depends on what you're comparing filter coffee with, and for what purpose.

If you were comparing filter coffee with every other coffee in terms of taste, for just flavor, then you would end up choosing French press, then filter coffee.

Both the French press and the filter coffee bring you a more nuanced flavor, and lots of caffeine.

The taste of filter coffee compared to espresso is again, much more flavorful and fuller.

Espressos are short, dense, and typically reach only the high notes of the coffee.

Moka pots/percolators provide a cup of coffee much like espresso, and the water is at boiling point when it touches the ground coffee.

This burns the taste a bit, and your coffee will be much like a darker roast, even if it's not.

Filter machines do heat the water, but not exactly as much, and they also let the water trickle as it needs do. Moka pots push the water up, by the power of induction.

Turkish coffee is wonderful in its own way, but there is the fact that you need to sort of parboil the coffee 203 times before it's done, again reducing some of your bean's flavor.

If you were using a light roast, your coffee wouldn't end up very great. Filter machines are gentler.

As for cold brew coffee, that's a completely different animal and should not be compared to how brewed coffee.

In the end, it's up to you which coffee you like

When you pick your favorite, you're going to need to look at a lot of variables.

How the coffee will taste, how easy it is to clean, how practical it is, how much time you have at your disposal, and so on.

I for one like filter coffee and think it's one of the most convenient ways to make coffee.

Just load the machine, press a button, and ignore it until you're ready to retrieve it.

It gives me the freedom to prepare breakfast in the morning without the extra rush of having to watch another pot.

In my opinion, this is the second reason filter coffee is better than other coffees.

As for you, you do what you like. Maybe after what you've read you decide you won't like filter coffee at all, and would rather stick to another type.

I've had mine for about a year at the time of writing this, and it's never failed me.

The coffee was always the same, as long as I added water and coffee as usual.

It's a taste I've come to use as a standard for every other coffee out there.

« Can Robusta Coffee Taste Good ? In Defense Of The Hardy Bean
5 Resourceful Ideas To Try Instead Of Coffee Filters »