A flat white has been the preferred choice for many coffee drinkers since 2015, when Starbucks adopted it onto its permanent menu.

But just what is a flat white, what is its structure ? We all know it's delicious, but how do you make one at home ? Let's find out everything there is to know about flat whites. 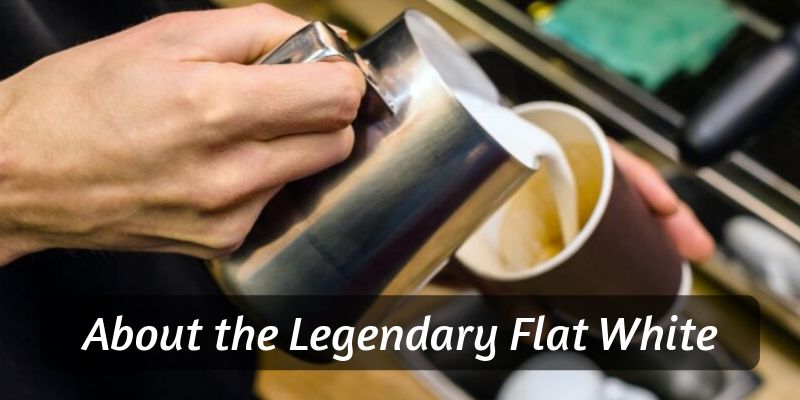 What is a flat white ?

A flat white is a type of coffee drink that is of recent (ish) origin, somewhere in the 80s. It's one part espresso shot, and two parts microfoam milk.

The name 'flat' comes from the complete lack of large, thick foam on the top of the drink, as you would find on a latte or cappuccino.

Imagine the flat white as a cappuccino, but without the thick milk foam layer on top. Or, like a cafe au lait, but the milk is frothed to achieve  microfoam, instead of being just scalded.

Another characteristic is that the crema of the espresso shot is allowed to show on top, which gives the drink a darker top than lattes pf cappuccinos.

Flat white origins (up for debate)

You'll find flat whites in many coffee shops, but especially in Australia and New Zealand since the late 80s. Its popularity then moved on to Britain, Japan, and finally Starbucks adopted it and features it on its menu since 2015.

There's a whole debate between New Zealand and Australia, both claiming to be the original birthplace of the flat white. Neither agrees on this, and there's really no way of proving that this or that country was the first.

However both kind of agree on the origin of the drink, in that it was meant to resemble (or actually be) a cappuccino.

As you may or may not know, when you steam milk for a cappuccino you need to use anything but 0% milk, otherwise it won't froth. Well, someone apparently did use 0%, and ended up with just microfoam, instead of actual frothed milk.

This is supposedly how the flat white came to be, as a failed cappuccino. Accounts of the creation are many and fuzzy, but they have this common thread.

Whichever way the flat white came to be, the important thing is that nowadays it's very much loved and an international drink. I think both aussies and kiwis should be proud of this development.

How to make a flat white

Alright, how do you actually go about making a flat white ?

What you'll need for one serving of flat white:

You will need to prepare you espresso machine. Make sure it's hot enough and has the exact amount of ground coffee as you like for the espresso shots.

Pull the shot(s) into the 5 oz cup. The crema on top should be a decent amount, especially if you're using ristretto or a double shot.

Meanwhile, measure out the 2 oz of milk, and place them into a large enough cup. Use the wand attachment on your espresso machine to foam the milk. No other method can give you microfoam, only larger bubbles.

Always remember to gently tap the side of the cup to remove any large air bubbles.

Keep in mind that you milk will nearly double in volume, so you'll end up with what looks like 3-4 oz of milk. The tiny air bubbles will make it look like it's more, but it'll just take up more space without being actually more.

Pour the microfoam gently into the espresso. Because it's just microfoam, you'll notice the top part (the crema from the espresso) will be light brown, since there are no large air bubbles to make it float to the top.

Once the drink is layered, it's done. You can make a bit of latte art as you pour the microfoam to form a sort of leaf or heart shape, though it will be faint.

Does a flat white have one or two shots or espresso ?

Now, when making your flat white you have a variety of options with it comes to the amount of espresso you use. If you use one standard shot of espresso, you get the standard volume for 1 oz/33 ml.

And adding 2 oz of microfoam milk will result in a well balanced milk-to-coffee taste.

However, if you use two ristretto shots (so two half ounce/15 ml shots) your espresso taste will be stronger, and the microfoam will be more of a helper than an equal. In will mellow out the strong espresso flavor.

If you're looking for the traditional way to make a flat white and how much espresso to use, then you're going to have to side with either the aussies or the kiwis. One camp uses ristretto, while the other uses a standard shot.

Both a valid ways of making a flat white, and it's up to you which you'd like to use.

Some things are up for debate when it comes to the flat white, but a few of them are set in stone. For example, a flat white will always:

Flat whites are relatively new on the international market, meaning they don't have the clearest recipe. I'm referring mostly to the espresso part. Still, they're more straightforward than a frappe, that's for sure.

However you want to make yours, you're bound to get a decent cup as long as you don't include the thick milk foam.

What's the difference between flat white and latte or cappucino ?

There's a few differences between cappuccinos and lattes, and the humble flat white.

First, both cappuccinos and lattes use thick milk froth, aside from the microfoam. A flat white will never have anything but microfoam.

Then you also have the fact that a thick milk froth allows for more dramatic latte art. You'll find such art on cappuccinos and lattes, because they both have that sort of milk froth.

But a flat white will have none, so any art you try to make when pouring the milk will be less impressive.

It's also going to result in a mostly dark/tan top, because the crema from the espresso will have the upper layer.

And, of course this also means that the espresso flavor will be well balanced with the milk, whereas both in cappuccino and latte the emphasis is on the milk (especially with latte).

Another difference between cappuccino and latte and flat white is the serving size. A cappuccino is usually around 3-4 oz, while a latte is 10 oz, and as large as 16 oz sometimes.

A flat white is usually larger than a cappuccino, though not by very much, and it's always going to be smaller than a latte.

Making a cup of flat white coffee is a great away to exercise your microfoam skills. It's going to take you a few tries to get the texture right, but you're bound to get it right in the end. As long as you keep the nozzle submerged and near the bottom of the cup, you'll be fine.