You've probably ordered frappuccinos before, and you might even love them. But what's this about frappes ? Is it another kind of frappuccino ?

While the two sound very familiar, they're actually different. The frappuccino is based on the frappe, and they have a few similarities, but they're often mistaken for one another.

So let's clear things up and settle the difference between a frappe and a frappuccino, and know what we're ordering today ! 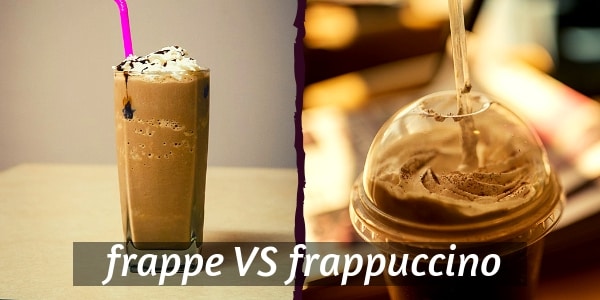 The biggest difference between frappe and frappuccino is the ice cream. Frappuccino is rather like a milkshake with coffee, where milk, vanilla ice cream and hot coffee are combined to make a frothy drink, topped with cream.

A frappe is a simpler drink, made with instant coffee and water, but it has so many variations it may also include milk, cream, ice cubes, or brewed coffee instead of instant coffee.

Where frappuccino has a set recipe, a frappe is all over the place. You will get wildly different frappes from all over the country, depending on where you are.

There are more differences between these two drinks, and I've explored them in detail in this post so feel free to take a look.

Both these drinks are coffee based. Or, at least the frappuccino often contains coffee.

A frappe is meant to use instant coffee, and making it with anything else won't really result in the thick foam and darker color we're used to for a frappe.

This is because the original recipe for the frappe calls for instant coffee, as it was invented/made by mistake at an instant coffee convention.

So, yeah, if you want to stay true to the original, go out and get some instant coffee. Any will do.

It adds to the bitterness and strength of the coffee flavor.

A frappuccino containing coffee will always use brewed coffee. Instant coffee is not common in this kind of drink, as it would give a different flavor.

Often, cold brewed coffee is used, since it seems the most logical choice when making an iced coffee drink.

Making a frappuccino at home is completely up to you and your preferences.

Read Also: How To Make Frappe At Home

2. Frappuccino is a specific drink, prepared by Starbucks

Frappuccinos are a very specific drink, patented by Starbucks. They came up with the idea, and have since refined it and made a whole series of frappuccino versions.

Initially, it was coffee based. Very quickly it was customized to meet the customer's needs, so that's how we got to frappuccinos that have no coffee whatsoever.

While the whole recipe for a frappuccino isn't revealed by Starbucks, it's usually a drink that blends ice and cream in a blender, and the whole thing is meant to be topped with whipped cream.

Add as many syrups of coffee types as you like, and you can of course sprinkle the whole drink with your favorite toppings.

The frappe on the other hand isn't owned by anyone, but is heavily associated with Nescafe.

The man who invented the frappe was working for this coffee company, and was using their instant coffee to come up with a drink.

It doesn't have a very specific recipe, in terms of ratios and exactly how much of this or that.

However it's not going to be a frappe is it has no ice cubes, and has not been thoroughly shaken in a shaker, then poured into the tall glass. 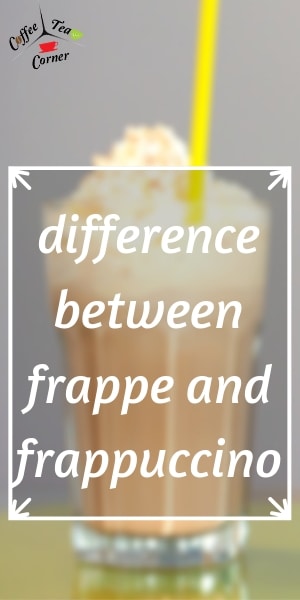 A frappe will always contain caffeine, no matter what ratio you use. Whether you go heavy on the instant coffee or add just a dash, you'll have at least a bit of caffeine.

If you were to use any other kind of coffee - as in, brewed coffee - you'd get a very different result.

As for the caffeine content of a frappe, it depends on how much instant coffee you add. On average, an 8 oz/236 ml instant coffee drink contains about 93 mg of caffeine. The range is 27-173 mg, depending on what kind of coffee beans were used in making the instant coffee.

A frappe is usually as large as 8 oz/236 ml, without counting the ice cubes and any additional milk or cream added.

Frappuccinos sometimes contain caffeine, sometimes don't. It depends on which kind you're ordering.

For example Starbucks' Strawberry Frappuccino has no caffeine, as it contains no coffee at all.

Conversely, their Espresso Frappuccino is about 165 mg of caffeine for a Grande (16 fl oz/473 ml), as estimated by Starbucks on their website.

They also mention that the drink uses both coffee, and espresso. The exact way the coffee is prepared isn't specified, but the point is that it does have coffee.

There are many versions of frappuccino you can get, so make sure you ask if there is any coffee in it if you're not sure.

The usual way a frappuccino is made puts it at a high calorie count.

Using the above two examples again, the Strawberry Frappuccino is 250 calories. This is for a tall (12 fl oz/355 ml), 2% milk drink, topped with whipped cream.

All this means is that you're going to get a sweet and tasty drink, and you will need to remember that if you're currently trying to lose weight, or keep a certain figure.

As for the frappe, it's got a bit of a lower score.

The instant coffee itself has barely any calories. Most of the drink is water, either frozen or liquid, and then there is sugar, which is added to taste.

Often the frappe is served with no sugar at all, to better enjoy the instant coffee taste and feel refreshed in the summer, since that was its purpose.

This is what is commonly used in a frappe, and you won't really see more than one scoop of ice cream per serving.

Please also remember that some ice creams contain less fat, but more sugar so their calories will even out.

If you're not sure, it's best to ask the waiter or barista how their frappe is made, so you know what you're getting.

Now, this all makes the frappe a wild ride when it comes to counting calories. It can be anywhere from 50 calories to 200, depending on the coffee shop.

5. Frappes are more of an European drink

Another thing about frappes, aside from there not being a standard recipe, is that it's a mostly European drink.

Seeing as it was invented in Greece, it's very common there. Cyprus as well, since it has close ties to Greece.

Much of South and East Europe knows this drink very well. In other parts of Europe, like Central and West, it's less known but you still wouldn't turn heads asking for one. I'm not sure about Scandinavia.

As for the U.S. the frappe is much less known, and it's often confused with the frappuccino. Given how few Starbucks there are in Europe (compared to the U.S.), that's not much of a surprise.

Conversely, the frappuccino is less known in Europe than the frappe, for the same reason.

A few similarities between frappe and frappuccino

We've talked about all the differences between a frappe and a frappuccino, and I think you're pretty clear on the by now.

But what about what makes them similar ? Aside from the name.

Well, for one they're both iced drinks. This makes them a summer favorite, and something you'll see in someone's hand very often in the middle of August.

Finally, they become very similar when the frappe is made with a scoop of ice cream, and topped with whipped cream. This can happen in some parts of Europe, and I've seen this on menus before.

I hope you found what you were looking for here. Frappes and frappuccinos are very common coffee drinks, depending where you're from.

They're great drinks on their own, but they are fairly different. Both are great for the summer though, and deserve their fans.

« How Long Does Brewed Coffee Last ? Keeping Your Coffee Safe
Frappe VS Latte - 7 Differences To Help You Pick Your Drink »