Espresso affogato is one of my favorite summer coffees to drink, right after frappe and ... well, I really love frappes and that's almost all I get in the summer.

Back to affogato, when I do drink one, it's usually home made, and I really love just how nice the ice cream and espresso blend together.

If you're looking for a recipe on how to make it at home, look no further. But first, let's settle what an espresso affogato is. 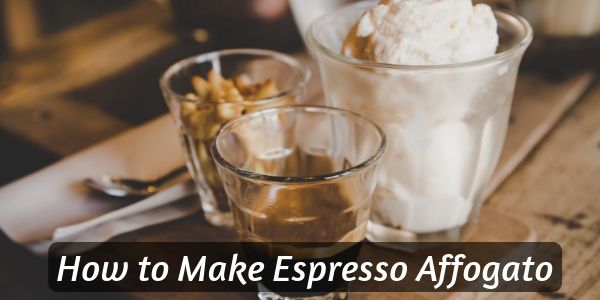 So what is espresso affogato ?

Espresso affogato is a shot of espresso, usually standard size, poured over a scoop of ice cream, traditionally vanilla.

It's called affogato (drowned, in Italian) because the ice cream scoop is pretty much drowned in the espresso, and melts away.

This is a drink that borders on dessert, and in some menus you'll find it listed under dessert and not "coffee and tea".

It's one of those food iteams that makes you wonder how to start enjoying it. Get a teaspoon and eat the ice cream before it melts ? Wait for it to melt a little and drink the whole thing ?

I'm going to show you how to make one such espresso, and I'm going to call it a drink in this post.

How to make espresso affogato

Making a nice affogato is not rocket science, but it does require a bit of coordination, and an eye for a good ice cream.

Not all ice creams will behave the same way when put under hot espresso, so you'll need to get a good one. More on that later.

But for now, onto the recipe.

Really, that's it. Prep your espresso machine, and let it heat up as much as it wants or needs.

More on how to make a great espresso can be found here.

While the machine heats up, get your vanilla ice cream scoop, and place the dollop into a small espresso cup (usually 3 oz sized).

Once your espresso machine is all heated up, fill the portafilter with 7 gr of very fine ground coffee.

Lock it into place, and press the appropriate button to make one standard shot of espresso.

Place your espresso cup filled with ice cream under the nozzle and watch it drip right onto the ice cream.

And you're done ! That's it, you've just made espresso affogato.

Of course, you can brew the espresso into a different cup, and then pour that onto the ice cream. You'd lose some crema with this method, but it's up to you how much you like the crema to mingle with the ice cream.

How to make affogato without an espresso machine

Have no espresso machine, but still want affogato ?

No worries, there's hope. First up, and the most espresso-like drink that's not actually espresso, we have Moka coffee.

A detailed guide on how to make a cup of Moka coffee will help you get the coffee for affogato.

Another option is to brew some very, very strong coffee, filter or otherwise.

The whole point of the affogato is that you're supposed to 'drown' the ice cream in the very strong espresso. So if you brew your coffee extra strong, you'll get a taste fairly similar to an espresso. 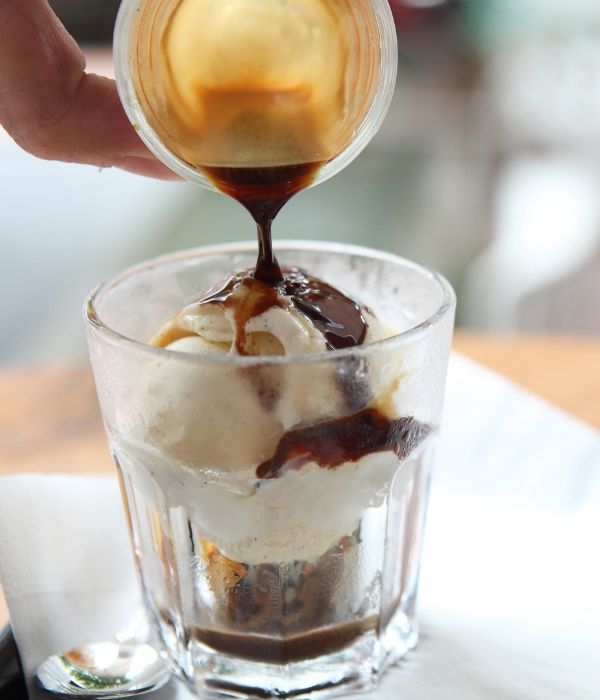 Making a nice cup of affogato isn't hard, like you just saw.

There's a few things you can do to make sure your drink comes out great, and how to avoid major mistakes.

Well, when you look at the ingredients on a tub of ice cream you should be able to see the milk to water ratio, or at least a milk content percentage

In short, you should opt for a milky, less watery ice cream. This results in a smooth ice cream, usually thicker, and less 'fluffy'. That's the best tasting ice cream, and it's more of a gelato than ice cream.

In fact, if you can get your hands on gelato, even better. The ingredients in a gelato really stand out, more than in a cup of ice cream, because of the way gelato is made.

But, if a foamy and spectacular finish is what you're going for, then get fluffier ice cream. All ice cream is mixed at a speed fast enough to incorporate some air bubbles. Not to trick you into paying more, but to air out the ice cream and keep it light and fluffy.

This fluffiness is what's going to make a nice, foamy finish on your affogato. And if you've got a very light colored ice cream, like vanilla or rum, then your drink will really look nice.

Okay, another tip is to use a double shot espresso, if you want a really strong tasting affogato, or to double the caffeine. You get a double espresso shot if you double the amount of coffee grounds in the portafilter, and let a shot run for the standard time.

And finally, a good way to get step up your affogato game up is to add some foamed milk, microfoam if you can. Not much ,just a spoonful, but it will make a whole lot of difference.

It kind of stops being an affogato at that point, but really, who's gonna complain about it ?

This means it doesn't have a high Robusta content, which can and will produce abundant crema.

Too much crema will make the drink muddy, and you won't really be able to tell the crema apart from the ice cream, but not in a good way. Some crema should exist, but not as much as to engulf all the ice cream.

Speaking of, it's best to use small amounts of espresso when making affogato. A large espresso, like a lungo shot will make the drink too watery, and the ice cream won't blend that well into the espresso.

Better to use a standard shot, a ristretto, or a double shot.

Variations on espresso affogato to try 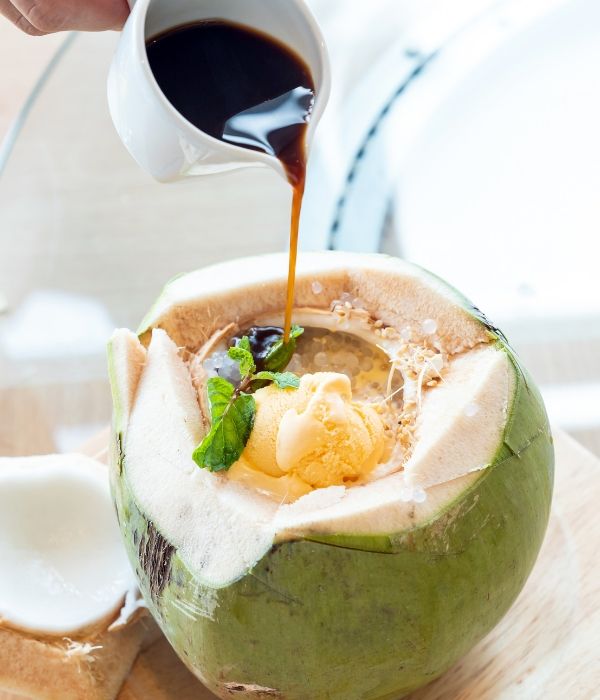 There are so many places you can go with this recipe. Depending on your tastes, and what you think goes well with coffee, you can make whatever combination you like.

For example my favorite ice cream to use for affogato is a simple, rum flavored one. In my opinion it fits in with an espresso just right and it's also a very white (possibly the whitest) ice cream, so the contrast with the crema will be very much like a cappuccino.

If you have a banana ice cream that you really think got the flavor down pat, than would go great with ice cream as well. Add a sprinkle of cinnamon, or dark chocolate shavings and you'll get possibly the best affogato ever.

Yet another idea, though it might not be the first thought, is to use simple strawberry ice cream. The delicate taste of strawberries will contrast nicely with the harsh, strong coffee, and produce a cup of affogato that's going to stand out from the regular vanilla version.

Espresso affogato is one of the greatest summer coffee drinks possible. It's tasty, it's coffee, and it's ice cream. Really, there's not much you can do to beat this combination.

Except maybe make a nice. big frappe with a scoop of ice cream. I've seen it done, and it's very much like a milkshake.

« How To Make French Press Coffee - The Best Way To Drink Coffee
Espresso Con Panna - What It Is, And How To Make A Great One »