When comparing two very different coffees like iced coffee and hot coffee, there’s going to be a lot to talk about, but also not very much. They’re both coffee, made from the same beans, but end up tasting so different.

This post aims to figure out which of them is better, more in terms of flavor and effect on health than anything else. Do keep in mind that we each like coffee a specific way, so you might find you have a different opinion.

Before we start though, we should first talk about the difference between iced coffee and hot coffee. These differences influence how each cup tastes, and how we perceive each cup. Some like it hot, some like it cold, and the way we brew either of them is going to influence our opinion.

1. Hot coffee is only brewed hot, iced coffee is brewed either hot or cold

The first difference in terms of flavor and overall tastes is exactly how each coffee is brewed. For the most part people brew their coffee hot.

This results in a specific kind of flavor, often a bit more acidic since the speed of the brewing process is much faster than for cold brew coffee, for example.

In hot brewing methods, the heat of the water opens up the ground coffee and extracts caffeine and nutrients very quickly, in a matter of minutes.

Cold brewed coffee though takes hours to steep, and results in a gentler, less bitter aroma.

But, you can get iced coffee both ways: brewed hot or cold brewed.

If you cold brew your iced coffee, you’ll remain coherent with the brewing method and the overall flavor will be very pleasant.

But if you brew a shot of espresso, chill it, and then add ice, the flavor will change. Hot brewing in general extracts more acids from the coffee bean (1), resulting in a more acidic taste.

Chilling hot brew coffee won’t remove the acidic tones. And in my personal experience, hot brewed drinks that are then served cold just taste… wrong, in a way. That might just be me though.

One thing you’ll often notice is that iced coffee tends to come in larger servings. As in, ordering an iced coffee to go usually results in a drink anywhere from 8 to 16 oz cups (236 ml to 473).

Granted part if it might be ice cubes, but that’s a big serving of coffee. And depending on how your iced coffee was brewed, it may have more or less caffeine. I’ll get to that in a minute, don’t worry.

As for hot brewed coffee, and keep in mind I’m comparing just black coffee here, is often served in much smaller cups. Like an espresso shot, or something under 5 oz/150 ml generally.

Maybe it’s because iced coffee is more of a summery drink, and just sounds like something most folks would just love to sip on during a hot July afternoon, or maybe it’s a habit thing, I’m not sure.

But if you look at any coffee shop, you’ll notice this difference.

Why does this matter ? Well, for one thing if you’re someone who likes to drink large quantities of coffee then this might be something to remember next time you order coffee.

And also if you’re trying to put a limit on your caffeine intake, then hot brew might just be for you since it seems to have less than iced coffee. 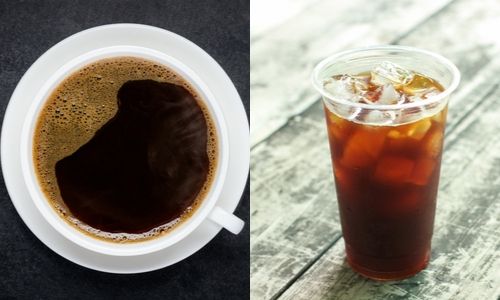 Maybe it’s due to the acidity level of hot coffee, or maybe it’s one of those situations where temperature influences how we perceive flavors.

The thing is that many folks report tasting more acidity in hot brew coffee than in iced coffee. This might also be because hot flavors tend to feel bigger, amplified and as such acid/sour notes might stand out more.

Whereas iced coffee made with cold brewed coffee is often reported to be less bitter, less acidic, and more subtle in flavor.

This might be because cold brew coffee takes much longer to steep, and the flavor might end up different since many compounds in coffee are only soluble in high temperatures. This applies to coffee oil and the acids naturally found in coffee.

The result is a much less bitter and acidic coffee, in some cases being completely non-bitter or acidic.

4. Iced coffee may take a lot more time to brew

This may or may not matter for some folks, but iced coffee might take longer to brew than hot coffee.

Cold brewing, which seems to be the best way to make iced coffee, can take anywhere from 8 hours to 18 hours, depending on how much time you can wait and how strong you want the flavor to be.

If you were to make iced coffee out of hot brewed coffee that was then chilled, it’d still take longer to put on the counter since you have to allow those extra minutes for it to cool off.

So if you’re on the run and really need a coffee right not, then hot brew is the quickest way to caffeine.

The strength – i.e. caffeine content – of any coffee will depend on how you’ve brewed it, and how much of it you’ve got in the cup.

This makes for a very uneven way to measure caffeine, since you can get different results from different brewing methods.

You’ll also notice this in Starbucks’ top caffeinated drinks, where the top of the list is crowded with cold brew and nitro brew.

This high caffeine content might be a result of the very long steep time cold brew requires (several hours), paired with the fact that letting the coffee steep for so long dues not ruin the flavor so most folks don’t mind.

Another thing to keep in mind is that what type of coffee bean you use will always have a big impact on how strong your coffee ends up, in terms of caffeine.

Robusta beans are the strongest beans, with half as much caffeine than Arabica. So brewing two coffees the exact same ways, only one of Robusta and one is Arabica will end up with Robusta winning the race.

So to answer whether hot coffee is stronger than iced coffee, it depends. If you’re having iced coffee made from cold brew coffee, then yes it almost always will be stronger in terms of caffeine.

If you’re having iced coffee made from hot brewed and then chilled coffee, there might not be any significant difference.

It seems iced coffee might be healthier… or is it ?

In terms of health, coffee can be both good and bad.

But it can also be good, if you have a small dose of caffeine and it aids focus and reflexes, ans also keeps you awake.

All that being said, let’s tackle the acidity topic. Most folks would argue that cold brewed coffee (and this is relevant if your iced coffee is made cold brew, which is often the case) is less acidic, thus easier on the stomach and intestines.

And this is true. Cold brew does seem to sit better with most people, when compared to hot brew coffee.

But, there’s also the fact that hot coffee simply extracts more antioxidants than cold brew (1). Since everyone is raving about the health benefits of coffee due to its high amount of antioxidants, I think this is something to take into account.

So to answer whether iced coffee is healthier than hot brew, I think the results are inconclusive. If your coffee is brewed hot, it may have more antioxidants but also a higher acidity, and this might not sit well with your.

But if your iced coffee is cold brewed, there will be low acidity, and possibly lower antioxidant levels.

You take your pick. But whatever you do, try and stick to black coffee if you want to be on the healthy side. Adding milk and sugar will only pack on calories.

So is iced coffee better than hot coffee ?

On the whole I think the results are inconclusive. There is no definite winner here, in my opinion since the science doesn’t seem to provide overwhelming support on one side or another.

Maybe more research is needed, or maybe it’s simply a matter of taste.

For me, in my own very subjective opinion, hot coffee seems to be better. I enjoy the flavor much better than iced coffee, and think that the antioxidants can be acquired from other drinks if need be, like Matcha or from fruits.

Iced coffee and hot coffee are different drinks, in in the end they’re the same thing – coffee. Whether one likes it hot or cold, the end result is very similar.

For those who are health concerned I think the more important point is not whether the coffee is hot or iced, but rather whether it’s taken black or sweetened and with milk added.

2. The Effect of Time, Roasting Temperature, and Grind Size on Caffeine and Chlorogenic Acid Concentrations in Cold Brew Coffee, PubMed.gov

Can You Reuse Coffee Grounds For A Second Cup ?

Cappuccino VS Coffee – Key Points, And How To Decide Which To Get