So you're standing in line and can't decide between a mocha and a latte. Which should you get ? Which is creamier ? Which has chocolate ?

Or maybe you're an aspiring home barista and trying to get a grip on each espresso based drink out there. I feel you, there's a whole bunch of them, and they somehow keep coming up with new ideas.

Mocha and latte are two very different but iconic espresso-based drinks. Each of them is someone's favorite, so if coffee is kind of becoming your passion you're going to find the distinction between the two very important. 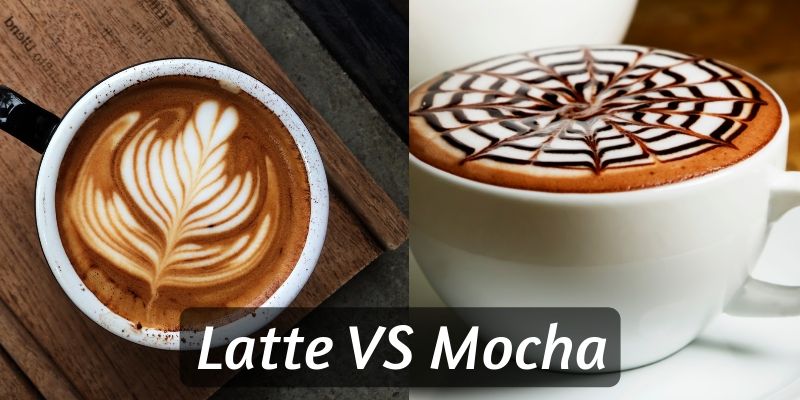 What a latte and a mocha look like (quick recipe)

First let's go through a quick run down of each drink, and what they look like.

A latte is made up of mostly milk, and a shot of espresso. To be more exact, you'll generally find the espresso shot as a double (usually a 2 oz version), and about 6 oz/177 ml more of milk.

That milk is in weight. In volume it ends up being more than 6 oz, since it's aerated milk like microfoam and frothed milk, along with steamed milk.

A mocha on the other hand is smaller (about the size of a cappuccino), and has 1 shot of espresso, 1 shot of chocolate syrup, and topped off with a bit of steamed milk and a layer of frothed milk.

Those are the basics about each drink. You'll better understand each of them while we're comparing their key points.

1. Lattes have more milk than mocha

Lattes are milk based, as opposed to mochas. Their name means milk in Italian, which is very fitting.

As a result, lattes have a very high amount of milk, in all 3 of its forms usually used in coffee: steamed milk, microfoam, and frothed milk. All of them are present in a cup of latte in a very large amount.

However that amount is skewed by the fact that the milk is aerated, meaning it will take up more space than it weighs.

In fact mocha has very little milk. There's just a bit of steamed milk involved, and a half-inch layer of milk froth.

The bulk volume and weight of a mocha is actually the espresso and chocolate. Which brings us to the next point. 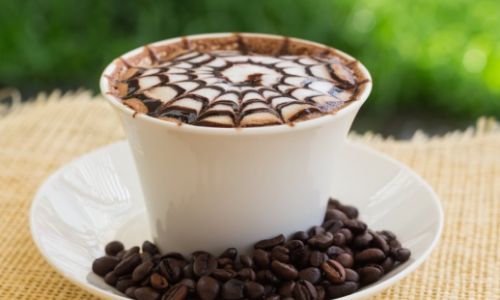 Mocha is actually a coffee that does contain chocolate, in fact it's the chocolate coffee drink.

It's the one that had chocolate before any of the flavored latte and cappuccinos, which makes it an iconic espresso drink.

In terms of exactly how much chocolate is in a mocha, it depends. On the barista, on the coffee shop's guidelines, and even from region to region.

Most of the time though the chocolate is at least as much as the espresso.

Meaning that if you use a 1 oz/33 ml standard shot of espresso, you're also going to use 1 oz/33 ml of chocolate sauce. Not a very thick one, but rather something on the thinner side.

But, if you were to use a double shot of espresso (still 1 oz but with double the amount of ground coffee), then it would be okay to double the chocolate content, to keep the flavor balanced.

This depends on your preferences and what the barista thinks should shine more in a mocha, the chocolate or the espresso.

As for lattes, you're going to find them without chocolate, in their original version. You can of course ask for a shot of chocolate in your latte in some coffee shops, but normally they come without it.

Given the large amount of milk in a latte, it becomes a consistent and voluminous drink. It's creamy, frothy and very warm and silky.

4. Mochas have no microfoam, are less creamy than lattes

Since mochas have a small amount of milk, it actually matters what kind of aerated mil is used in it.

Normally you'll find a half-inch cap of frothed milk, and there will be some form of decoration on it, but no latte art.

There is no microfoam, since that would change the texture of the drink, and mochas are only flexible when it comes to the kind of chocolate used.

This translates into a less creamy texture than lattes since it's the microfoam that makes lattes so velvety and smooth, but you won't find that in a mocha.

On the other hand in a latte you'll find about half of it is microfoam, which is going to set it apart from any other drink.

Common features of latte and mocha

Now that we've gone over the basic differences between latte and mocha, let's talk about what they have in common, since that's a important point as well.

Both latte and mocha are very mellow drinks. The espresso flavor is very toned down in both drink, once by the sheer amount of milk, and once by the chocolate.

This makes both drinks a good option for those who would like to get into coffee but would like something mellow and sweet to start out with.

Another common trait of mochas and lattes is their decoration. Or just rather the fact that they're decorated.

Mochas are usually dusted with some powdered cinnamon, shaved chocolate, cocoa powder, or something similar to mark it as different than the other coffee drinks.

The latte usually comes with it's latte art, and that's about it. Impressive, but definitely has a template and will look a very specific way. 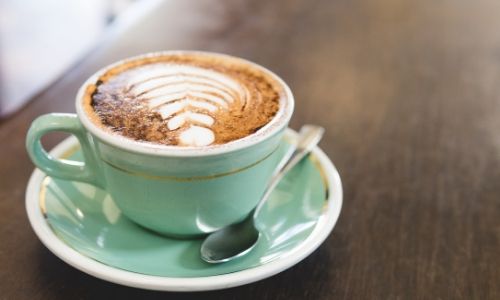 A few details to keep in mind

After going through what sets mocha apart from latte, and what makes them similar, let's note down some key points, since there might be other details that can throw you off when looking at a menu, or other recipes.

Ever since coffee became an international phenomenon, most drinks got a standard, internationally accepted recipe.

And along with those came new and exciting coffee drinks. They also managed to confuse everyone at first, since they need a bit of explaining and are easily confused for other drinks.

So you've got the mocha latte, which sounds like a cross breed between a mocha and a latte. This is not exactly true, since in fact it's just a regular latte that comes with a shop of chocolate sauce or syrup without you having to ask for it.

'Mocha latte' is how you're going to find it in some menus, right next to regular lattes.

Mochaccino is the cappuccino version of a mocha latte, that is a regular cappuccino with a shot of chocolate syrup or sauce added.

You might sometimes find it spelled as 'moccaccino', but it's the same thing. If you want to be really sure, ask the barista or waiter what's in the drink and then you'll be sure.

Mocha and Moka, not to be confused

Another confusion that can happen is mixing up mocha with Moka. This is mostly done when speaking, since they sound so similar, but are in fact very different drinks.

A Moka coffee is brewed using the Moka pot (sometimes known as percolator), and is just a method of preparing coffee. It does have a flavor of its own, but it's still fairly similar to an espresso.

And a mocha is the espresso and chocolate coffee drink we've discussed today. Some folks won't hear the difference between the words when you speak them, so make sure you're clear about your drink.

Mocha and latte are two very delicious but different drinks. They're both wonderful in their own way, and now that you've gone through their main differences and what makes them similar, you'll know just what you're dealing with.

I remember in my first couple of years in college when I was just getting geeky about coffee, I has a difficult time figuring out each coffee and its ingredients and ratios simply by looking at the name.

As, first world problems. I hope I helped you figure out lattes and mochas, and pick your favorite next time you go out.