Can't decide between a cappuccino and a latte ?

Or maybe you're debating with a friend which drink is the absolute best coffee experience.

This has been an ongoing issue since the birth of lattes. So let's settle things now and take a look at each drink in particular, then compare their main differences.

Then, maybe, you'll have a clearer idea of which coffee to pick when you're out and about, or just to make at home. 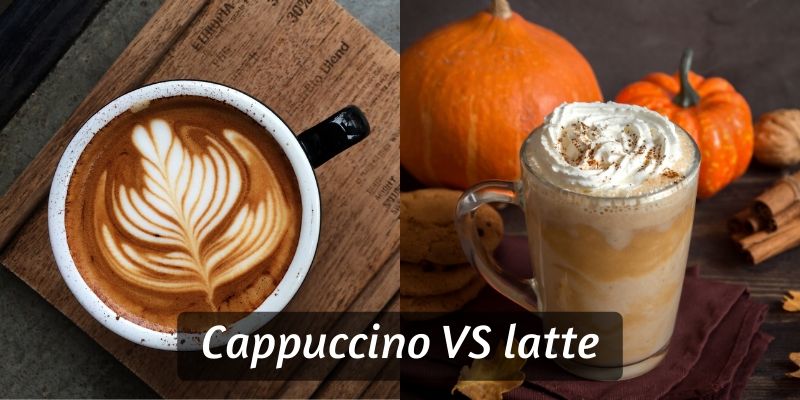 They're essentially the same drink, with minor differences

Before everyone jumps at me, let's look at the facts.

Both drinks are espresso based.

Both drinks employ a significant amount of milk, steamed and foamed.

Both drinks are favorites in the Western part of the world.

Both drinks may be flavored, but especially the latte.

In the end, they've got a few minor differences to set them apart, aside from the serving size.

For example, a cappuccino is much more closely related to a latte than either of them would be to an Americano, or an espresso macchiato, or even a mocha.

So what is a cappuccino ?

A cappuccino is espresso based, and has 3 to 5 times more milk.

The measurements are in total volume, rather than in weight.

Usually a cappuccino comes in a 5 oz/150 ml serving, of which just one ounce/33 ml is espresso, and the rest steamed and foamed milk.

The coffee flavor is pronounced, but still toned down by the milk.

Alright, then what is a latte ?

A latte is the bigger sibling of the cappuccino. It, too, uses one shot of espresso (1 oz/33 ml) but the milk is in much higher quantity.

Also steamed and frothed, but a little differently than for cappuccino. I'll get to that part in a bit, don't worry.

This results in the latte being an unusually large drink, for a coffee-based one at least. You'll find lattes anywhere from 8 to 16 oz/236 ml to 480 ml.

And often enough, you might have the option to flavor your latte with various syrups, or special blends around holidays (think Pumpkin Spice Latte) 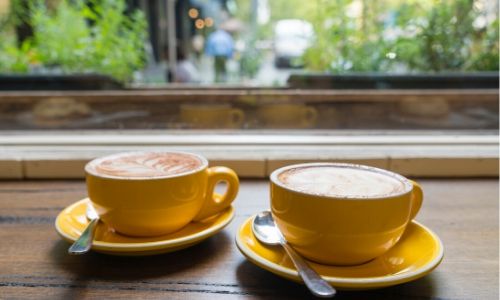 Which one has more caffeine ?

Both drinks may have the same amount of caffeine.

This is because the caffeine comes from the espresso shots used to build these drinks.

Normally, each drink is made with just one standard espresso shot.. That can range anywhere between 60 mg of caffeine to 130, depending on what coffee beans were used and if there was any Robusta involved.

Now, you have the option of getting a 'double latte'. Which means your barista will use the same amount of milk, but two shots of espresso or a smaller double shot.

This turns the latte into an oversized cappuccino, in terms of ratio and proportions. Some like it this way, some prefer the original.

The point is, if you're watching your caffeine, stick to a single standard shot of espresso. Maybe ask the barista how strong the espresso is beforehand.

Which one has more calories ?

Most often, it's going to be the latte.

The milk used for latte is in larger quantity than for cappuccino. Depending on what kind of milk was used, one ounce may have anywhere from 17 kcal (full fat) to 10 kcal (skim milk).

All lattes are sweetened with simple syrup, which again bumps the calorie count.

If you add any flavorings, those are usually sweetened too, resulting in more calories.

As an example, let's see Starbucks' basic cappuccino and latte, and compare them.

On the other hand a latte with no flavorings or syrups, using 2% milk and 2 shots of espresso reached 190 kcal, by Starbucks' results.

This all boils down to one thing. Lattes tend to be high-calorie drinks, but you can always make a cappuccino surpass it by adding flavorings, toppings, powders and various add-ins (which most of us do). 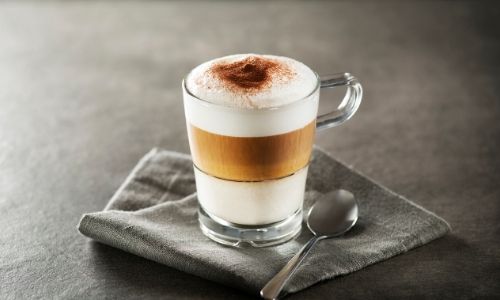 Main differences between a cappuccino and a latte

Alright, you know the basics of cappuccino and lattes now.

They're fairly similar, and they use the same ingredients.

However they're used a little differently, and this can make a completely different drink. This is achieved by tweaking the ratios, and the texture of each layer.

So let's get into them, and pick them apart a little.

1. Cappuccinos are usually smaller than lattes

A cappuccino is usually going to be on the smaller end of the spectrum. Not as small as an espresso macchiato (that's just one ounce/33 ml), but still small.

In most cafes you'll find cappuccinos in 5 oz/150 ml cups, which is the most common serving.

That being said, in many franchise-owned establishments (like Starbucks, McDonald's, Dunkin Donuts, etc.) you'll find cappuccinos at very large servings as well.

Capps at 12 or 16 oz aren't unheard of, but not the traditional way of serving them.

This is because cappuccinos are meant to be a small drink, with a couple of milk layer and a milk foam. As opposed to a long drink meant to be savored and sipped one, such as iced tea.

Lattes are large to begin with. They're normally (in cafes) at about 8 oz/235 ml, and served in ceramic or glass cups. You can get them a little larger, like 10 oz/300 ml.

And yes, if you buy a latte in one of the coffee chains I mentioned earlier (or franchises that also sell coffee), you'll be able to get very large lattes.

Taking all that into account, if you want a large drink you can sip on while on a road trip, it won't really matter which you gt since both can be bought in very large sizes.

That comes with the downside of usually being overly flavored and being far from actual coffee, if you're looking for caffeine.

In most cases I recommend getting both drinks from a cafe, and you'll usually get better quality and a more concentrated coffee flavor.

2. Lattes are often flavored, cappuccinos are usually not 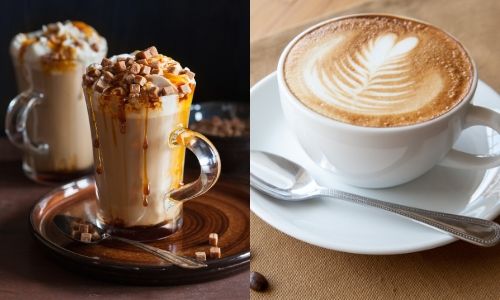 Bearing in mind what we've just discussed about flavorings, most often it's the lattes that are going to be spiced or drizzled or sprinkled or something else.

Whether you get your drinks at a real cafe or from chain stores, they will often come with the option to be flavored. It's almost always just the lattes.

Maybe they're viewed as a less serious drink, with the milk diluting the coffee so much. Or maybe it's that milk goes so well with many other flavors.

But if you're looking for a flavored drink, your best bet is a latte.

A cappuccino (in some stores) may sometimes be flavored, but it's usually left as-is.

This is because of tradition mostly, since cappuccinos are meant to be a very simple coffee drink that showcases the way creamy milk blends with espresso without overshadowing it with other flavors.

3. Cappuccinos have a stronger espresso flavor

Given the smaller milk to espresso ratio, cappuccinos have more of an espresso flavor than latte.

This is because capps use 1:3 to 1:5 espresso to milk, while lattes double that ratio, or even more.

That being said, in some cases you may find that your latte automatically comes with a double shot of espresso. As in, that's what the barista is trained to do.

It's not bad, but it's not the original recipe either. By original I mean the one that relies more on milk than espresso.

A latte with a double espresso would end up tasting much like a very large cappuccino.

In most cafes, the barista will ask you or will be willing to use a double shot instead of standard if you ask. It may change the final price of the drink, but not by much. 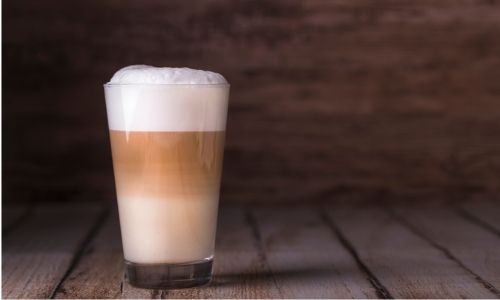 4. Lattes were derived from cafe au lait, kind of

Lattes are a funny thing, in a way.

What we know today as latte was already in use for quite a few decades before it even reached our menus.

The original formula for latte was the same as for cafe au lait - coffee with milk, in French. It was an European custom, and pretty much everyone had their coffee this way in the morning.

Then came the espresso revolution, or moment, or however you like to call it. It was sometime around WW2, and it became very popular worldwide, since then.

Along with the espresso came the cappuccino, and the world forgot about cafe au lait for a while.

Then, as cappuccinos became more and more common, the need for a milkier drink came along. Thus, the latte was born, resembling the original coffee with milk, except the milk was now also foamed.

Where cafe au lait normally has just hot milk and espresso (or regular coffee in some cases), a latte also uses milk foam to top off the drink.

As for cappuccinos, they were the same as always. They became a thing when espresso became a thing outside of Italy, and were pretty much unknown until then.

Back then there was less emphasis on the crema and microfoam blending nicely into patterns, but it was still very similar to the cappuccinos we have today.

5. Cappuccinos are a little 'drier' than lattes

When combining the milk and espresso for either of these drinks, it's important to get the textures right.

Both drinks are made of espresso, steamed milk, and foamed milk.

Now, the foamed milk has two extremes. The regular foam, which is light and airy and might be a little see-through, depending on the barista's skill.

The other end is microfoam, which is a very dense foam that uses the smallest air bubbles possible. It turns the milk foam into a sort of airy cream that's still light but not as much as regular foam.

Cappuccinos use espresso, steamed milk, and no microfoam. They use a layer (about a half inch thick one) of regular foam, and this results in an airier, sort of 'dry' top.

Of course, there are cappuccinos that have more of a microfoam layer on top, and there's nothing wrong with that. It simply depends on the barista's skill level and also their preference.

Each barista will prepare their drink according to the recipe they've been taught, but may also tweak them if they feel like the drink could do better.

A latte uses espresso and steamed milk as well, but  little less steamed milk and more microfoam. There is almost no regular foam on a latte,  and  this makes latte art a breeze. 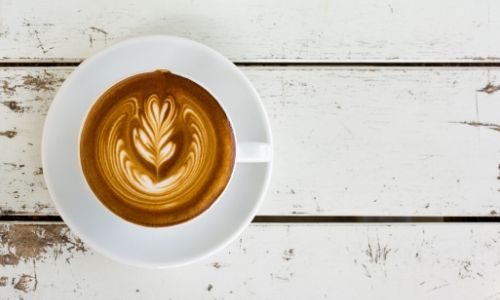 So which one should you get ?

It really depends on what you're after, although they're really not that different.

If you're in the middle of winter and would like a hot, milky drink to warm you from the inside and also give you a bit of a caffeine boost, then you might want a latte.

But if you're going for more of a bolder coffee flavor then you may want a cappuccino.

Whichever you get, it might be better to get them in the original size, and without too many flavorings.

This is so you may enjoy their original taste and texture, and really appreciate the barista's work.

Cappuccinos and lattes have always been at odds, but there's really  no reason for it.

Both are perfectly tasty coffees, with a nice milky finish and wonderful texture.

They might be very similar, but they're different enough to offer two separate coffee experiences.