Home » Coffee Facts » Does Coffee Lose Its Caffeine Over Time ? Here's The Truth

Ever made a cup of coffee and forgot it on the counter ? Then you know the taste can be very different after a few hours. What about the caffeine level, does it go away after a while ?

It seems some things are a given with coffee, and one of these is how long caffeine lasts in your coffee, brewed or not. Let me explain. 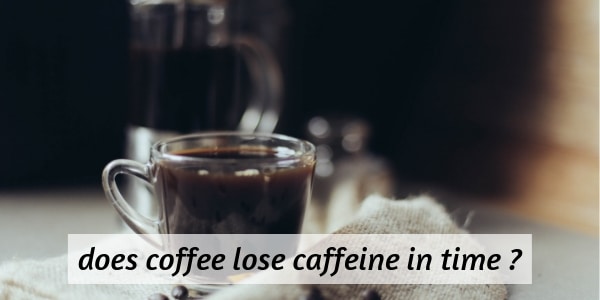 So does coffee lose its caffeine in time ?

No, caffeine does not evaporate. Unless you specifically remove the caffeine from the beans to make it a decaf version, your coffee will retain its caffeine.

If you brew a cup of coffee now, and set it on the counter for 8 hours and come back to drink it, the caffeine will still be there. It will still do its job, to give you a nice boost and help your brain stay awake and focused.

But the flavor will be almost gone, since the flavanols are the first to go when it comes to coffee shelf life. Let's see a bit about caffeine in general, so we can understand this whole process, and what happens to your cup of coffee after you brew it.

A bit about caffeine as a substance

Caffeine works as a sort of 'fake' plug for your brain's tiredness receptors. This is the very simple version of how coffee works, better explained in this TED-ED video.

Caffeine itself is a solid substance. If you were to take it out of the coffee bean and lay it out somewhere, you'd be left with a white, dry powder.

The same way sugar would be a solid substance, for example. Caffeine is water soluble but does not evaporate. The water that is mixed with the caffeine will simply evaporate in time, and you will be left with the same amount of caffeine in your cup as you started with.

Caffeine has a melting point of 235 C/455 F which is very much above what any coffee brewing method can produce or require. This means that you caffeine can not melt and break its bonds in a regular cup of coffee, even with the hot and high-pressure espresso.

There is no brewing method that can make the caffeine disappear, and exposure to air does not make it evaporate.

You can get pure caffeine as a dietary supplement, but it's much too easy to overdose on it since only a few milligrams are needed for the human body.

So if your usual cup of coffee contains 80-175 mg/ 0.002 - 0.006 oz of caffeine, that's the same amount of caffeine you'll be left with if all the water in your cup of coffee were to somehow evaporate all at once.

What happens to your cup of coffee after you brew it

A cup of coffee will have a fairly short lifespan. This is partly because we tend to drink out coffee right after we brew it, and partly because the flavor will fade after about an hour.

So your freshly brewed cup of coffee will be tasty and flavorful for about an hour(assuming it keeps a constant temperature like in a thermos) before it loses its punch.

Actually, this is only true as long as your coffee is hot or at least warm. As it cools the liquid will evaporate very slowly, but the aroma will fade as well.

This might lead you to think that the caffeine in it has disappeared too, since it's very closely tied to how you perceive the taste of your coffee. To put it simply, bland tasting coffee will seem weak (in terms of caffeine) to your brain, which will then figure there's not much caffeine in your cup.

What if you reheat your cup of coffee ?

This will both help with the taste and make it worse, but the caffeine content is still the same. Reheating already infused coffee will not have the effect you're looking for, other than making it warm again.

This is why only fresh coffee tastes good, and stale coffee (even if it was kept warm) won't make you as happy.

Reheating your already brewed coffee will only help to evaporate a good portion of whatever was left of the coffee's aroma. This means that even if the caffeine content is the same as 4 hours ago, it will seem lower because the taste is mostly gone. Sure, it will taste a bit like coffee, but it will be off. 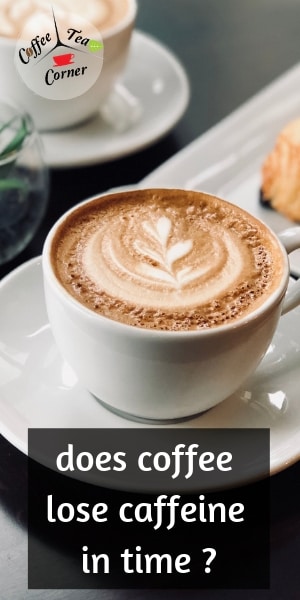 The coffee's taste can affect how much caffeine you detect

You might be wondering why I'm talking about taste when you're asking about caffeine content. Well, they're very closely tied together, and one will influence the other.

This is how you'll notice fruity notes, or chocolate, or a hint of vanilla. There are the flavors and aroma that are specific to the beans you've bought.

The bitterness and earthy tones are specific to the caffeine itself. This is why Arabica beans are easier to enjoy for most people, since they've got only 1.5% caffeine content.

They're sweeter than the Robusta beans, which means they won't taste as earthy and harsh, which in turn will affect how strong or caffeinated you perceive your coffee to be. These are the beans most grown for different flavor and aromas, a bit of a finer and more delicate coffee.

Conversely, Robusta beans are 2.7% pure caffeine, and they also have a definitely earthy flavor to them, a bit burnt at times. They're the git-er-done coffee sibling, and not everyone's comfortable with that kind of flavor.

They're sometimes used on their own, or in a blend or varying proportions. This will affect the final taste of your cup of coffee, so a cup brewed with Robusta or mostly Robusta will taste stronger, and will arguable have a higher caffeine content since Robusta themselves are higher in caffeine.

Taste and caffeine content also varies with the brewing method you use, and whether you take your coffee black or not. For example a filter coffee will taste milder than an espresso, since there is more concentration (less water) in the espresso.

However the caffeine content is higher in the filter coffee, because the water has more time to draw the caffeine out from the grounds.

Storing your coffee affects flavor but not caffeine

Alright, we're discussed how taste and caffeine are related, and why a stale cup of coffee might make you think the caffeine's gone (or mostly gone).

Over time aroma will fade, so you'll lose the notes that were specific to that particular blend of beans. If they were beans that were infused with an aroma, that will be the first to go.

Of course this all depends on how much time the bag has passed since the beans have been processed, how strongly they were infused (if they were), how long the bag's been opened, when the coffee beans were ground, and so on.

In general beans are at their freshest for up to 2-3 weeks after roasting, but airtight containers and bags have made that term longer. Whenever you're shopping for coffee, be sure to look for the roasted on date, not the best by date.

Caffeine will still be present for a minimum of 4 years in roasted coffee beans. This is how long the unprocessed caffeine in the beans is stable for. It starts to break down a bit, but very very slowly after the initial 4 years. The same applies for ground coffee.

Most bags of coffee don't last 4 years in a home or coffee shop, so I think we're all safe.

I hope this article helped you figure out whether your coffee's still okay or not. This is something a lot of us maybe think of but rarely ever ask other about. Well, here's your answer and I hope it helps.

I sometimes forget to drink half my coffee in the morning before I leave for work. When I come back and reheat it (mostly for the ritual of it) it's never as good. Granted it sits on the counter for about 8 hours and that doesn't help at all.