Reading this, I'm assuming you want to know more about decaf coffee, why it's different from the regular one, and why everyone's going on about it. I honestly didn't really know very much until recently when I looked up some health benefits for decaf.

But here's what I found out, and I hope this article will help you make the decision between the two types. Let me explain. 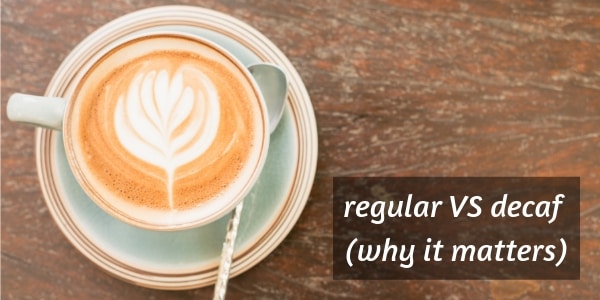 What is decaf coffee ?

Decaf coffee has had almost all of its caffeine removed via chemical solvents. The remaining caffeine, around 3%, is nearly undetectable for most people. There is also a slight difference in taste, with decaf coffee tasting lighter and more watery than regular coffee.

The exact amount of caffeine leftover will depend on each brand, and what sort from that brand you're opting for. Some might have 5%, some might have 3.5 %. It's up to you to check the labels before buying, and to make sure it's up to your standards and preferences.

There are several differences between regular and decaf coffee, and I'll cover these in this article. But first let's see what the usual process of making decaf coffee looks like.

How decaf coffee is made - short version

The process of removing caffeine from the beans is fairly simple, in a way. It all cases it requires green coffee beans, so the beans haven't been roasted just yet. This means that they're easier to work with than the roasted version.

The green coffee beans are either bathed or steamed in a series of solvents, usually along with a water bath, to draw out most of the caffeine. I'm not terribly into chemistry or very technical processes, so if you want to know exactly how decaf is made, this article will help you out.

But in short, those green beans are usually left with about 3% caffeine in them, so those means your decaf isn't completely caffeine free. But it's still a very low amount.

The solvents aren't necessarily scary things. One of them, and actually one very commonly used for this process is ethyl acetate. It's naturally found in bananas, apples, and coffee (surprised me there).

So on the decafs that are obtained through this process you might actually find a label or print saying this coffee was ''naturally decaffeinated". This is actually the process that removes most of the caffeine (96-97%) from the beans, so it's one of the most commonly used.

There is another thing to consider when wondering about the differences between decaf and regular. There are 2 main types of coffee beans. The most common, and generally approved Arabica strain, and the stronger but not-for-everyone Robusta.

Arabica beans are usually the higher-end coffee, not necessarily because they're definitely superior, but because their flavor is easier on most people. They're softer, fruitier, not as bitter as Robusta. Arabica beans will get a higher price tag, on average.

Again, this is merely the general consensus. Kind of like the difference between black coffee and milk coffee. Black coffee is not for everyone, since it's so strong. Most people take their coffee with some form of milk and sugar (me included), and seem to think this is the norm.

As for Robusta beans, these are the cheaper but much stronger beans of coffee. They're cheaper because they're hardier and because they're not as appreciated by the general public. So working with them is cheaper in the end, if you're putting them through a time consuming and costly process.

Which is exactly what decaffeinating the coffee beans is. So working with Robusta makes the whole process easier on the manufacturers. That being said, you can and will find Arabica in some decafs, or even Robusta and Arabica mixes.

The funny thing about this is that Robusta beans have double the caffeine content than Arabica (which gives them that bitter, strong taste by the way), so decaffeinating them takes even longer. Still, it's apparently cheaper and easier than with Arabica. Funny how things work, no ?

Robusta can be good under certain circumstances, so don't push it aside just yet.

There were plans to produce more of these beans, or cross them with already existing bean types, to keep the flavor profile. However the progress in this topic isn't easy to find, and I'm not sure if they've ever managed to breed these beans successfully. If they have, the decaf coffee would be fairly simple to make.

The main differences between decaf and regular

Aside from the coffee content, there are a few other differences between decaf and regular. The first and foremost is the taste difference. Nowadays the process of decaffeinating the beans is improved, and can still leave most of the flavor and strength intact. But a good portion of it will disappear in decaf coffee.

This is because the caffeine is the main thing giving coffee its distinctive taste. Not the only thing, but the most important one. So you'll be experimenting with several brands, cup sizes, water to coffee ratios when and if you switch to decaf.

Trying out different brands and seeing what kind of beans would be best suited to your taste might sound like a hassle, but it can actually be quite fun. As long as you're prepared to experiment, assume there will be some bad coffees, and look around for advice on the best decaf, I'm sure you'll find a good option out there for you.

Quantity is also another factor here. If your best decaf isn't as strong as the regular, but you still want/need decaf, then you'll be possibly doubling the amount of coffee grounds the water goes through. That means going through your coffee faster than with regular.

You can work around this quantity problem by looking for a stronger flavor in the decaf version of your favorite coffee. Or, you can also change up the brewing method.

A drip-filter coffee will seem lighter than a shot of espresso for example. This is because of the water content, the way it passes through the coffee grounds, and even what it's meant to do.

Or, if you usually take your coffee as a big latte, consider toning down the milk and/or sugar, since decaf is far less bitter than regular. You won't be needing as much help from other ingredients.

There is also the price point to consider. Decaf, while still made with Robusta, is going to be a bit more expensive than regular. This is because the process itself is still expensive and take a lot of time.

In some types of decaf the first batch of coffee beans has to be thrown away, or reintroduces into the solution to regain a bit of flavor. This all takes time and quite a bit of skill and effort. 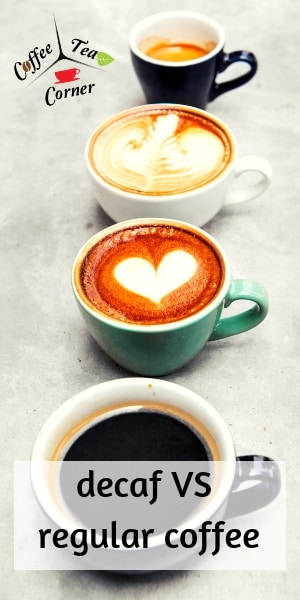 If you're looking to remove caffeine completely from your system, I'm sure you've got a good reason for that. But if you're trying to drop the habit because decaf is the healthier version then this will be news for you.

Of course, you could always just switch to some types if tea for your morning cup.

There are certain advantages and disadvantages for both regular and decaf coffee.

Regular coffee has the main benefit of having a high caffeine content. This means it's also got the highest amounts of antioxidants in most Western diets.

The is also the fact that caffeine will temporarily help your mind and body focus, have a better reaction time, and will pretty much get you up and going. The fat-burning effects of caffeine are mostly lost with decaf.

Downsides for caffeine are the fact that hypertension and heart-related problems can occur faster in those people who drink large amounts of coffee each day, in general.

Decaf coffee will also reduce your risk of rectal cancer and type 2 diabetes, so it's worth considering as a switch. Also the fact that it's lost most of its caffeine does not mean the antioxidants are lost.

A fair amount of them will still be present in your decaf, so you can still enjoy most of the health benefits of regular coffee even if you've switched to decaf.

Another thing to consider is that both regular coffee can decaf can increase you 'bad' cholesterol levels, because of the natural oils that occur in the coffee bean. Of all the brewing methods, the French press seems to have the highest fat content, while the drip-filter seems to be the safest.

So which coffee should you choose ?

This really depends on you and your own preferences, or which medical conditions you've got.

I for one an a regular coffee gal, and wouldn't really be happy with decaf. But if you're pregnant, or a have heart condition, hypertension, have stomach ulcers or any form of stomach pains, or you're a senior, then decaf would probably suit your better.

This is because the low (almost nonexistent) caffeine content in decaf will not trigger hypertension, arrhythmia, profuse sweating and a bowel movement all at the same time. It's also the caffeine that give your heartburn or stomach burns in the long run.

Decaf would be a good choice as well if you're a person who drinks several cups of coffee a day. This is because your body can and does get used to the caffeine you give it every day. So you'll be developing a resistance to it, and you'll end up needing more.

Which will land you in heart-problem territory if you're going past 4 cups per day. In such a case, sticking to one regular in the morning (or when you need it most, depending on what you're doing) and the rest decaf will keep you safe.

There is a definite taste difference, and it's up to you if you'll like it or not. I for one know decaf is too light for me, but maybe you're fine with it. Give it a try, and see which you're better off with.

Whatever you end up choosing, be it decaf or regular coffee, at least you're informed. Many people mean there are many tastes out there. I for one don't really life decaf, but I can see there are health benefits for some people with medical conditions.

Most of us just wake up in the morning and make a cup of coffee when we're half asleep. We don't really think about it. We've come to both need the caffeine and develop a habit as well. Even noticed how bad your day gets if you somehow skip your morning coffee ?

The problem is a lot of us drink more than just one cup per day, or more than what's just necessary.

So even if you have no medical condition, it would probably be wise either to switch to decaf for some cups throughout the day. Or, maybe add more water or milk to your regular coffee so you keep the caffeine levels to a reasonable level.

In this respect tea is a great solution. By this I mean that both black and green tea have caffeine in them. True, in smaller quantities than coffee, but it's still present. Switching your 4 cups of coffee to 1 of coffee and 3 of tea could help you out in the long run.

I know it did the trick for me.