Wondering about the differences between espresso con panna, macchiato, and affogato ?

To tell the truth, they're pretty similar. But also completely different, at least in what they use.

Different enough to really stand out from one another.

So let's get into each drink and discuss its key points, and how they differ from one another.

If you're planning on being an accomplished barista (or even just mediocre), then you'll need to know the difference between espresso drinks. 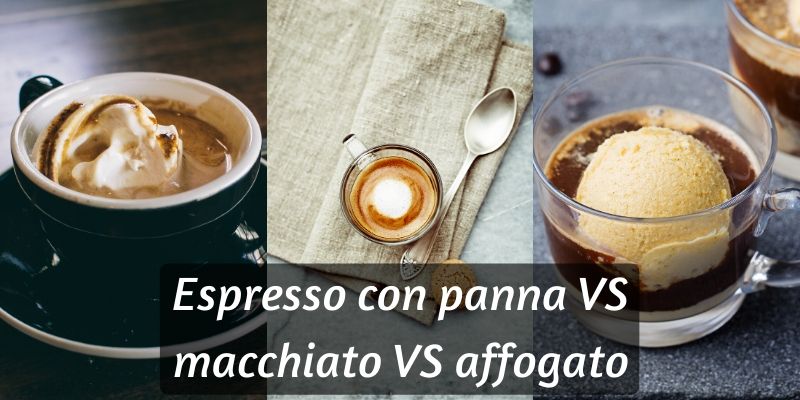 What is an espresso con panna ?

Espresso con panna sounds like a lot of things except what it really is. At least for non-Italian speakers.

In truth, ''con panna'' simply means ''with cream'' in Italian. Nothing very complicated there.

Except for the rest of the world it could mean anything, so the name of the drink isn't exactly self-explanatory.

But now you know. Espresso con panna is just that, a shot of espresso with a dollop of whipped cream on top.

Nothing else, nothing extra fancy.

Very easy to make, and really beautiful if you can make a bit of a swirl with the whipped cream.

What is a macchiato ?

An espresso macchiato is again, not very clear, until you translate it. "Macchiato" means "spotted, stained, marked" in Italian.

So the espresso is 'marked' with something. What with ? A teaspoon's worth of milk froth.

It's a single shot of espresso, with a nice, white spot right in the middle of the crema, made of milk froth.

It's actually pretty, and again very simple to make if you've already got milk froth on hand.

Please not that there are two macchiatos on the market.

One is the espresso macchiato, which is the original version and is like I just described it.

The other is latte macchiato, which is the reverse of the original. Meaning in a big glass of steamed and frothed milk, a single shot of espresso is very slowly poured.

This makes a 'spot' in the center of the milk and turns the whole drink on its head. Delicious, but not the original.

Some coffee shops don't make a distinction between the two of them, so be sure to ask the barista for espresso macchiato if you want the espresso-based one. 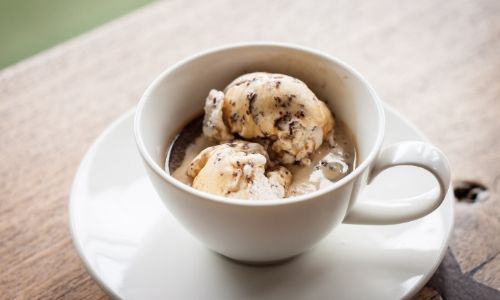 What is an affogato ?

Espresso affogato is probably the most confusing one so far. The name itself means 'drowned', in Italian.

And that doesn't sound very appealing or makes any sense, until you actually take a look at the drink.

This is a bit of a dessert coffee, and it's absolutely amazing as a summer treat.

The difference is in the topping

So by now you know that these drinks are pretty much the same in terms of structure.

Take one part espresso, and one part something else that's dairy-based.

The origin of the espresso con panna is kind of lost tot eh ages, though some claim it originated from the coffee houses of Vienna a couple centuries ago.

The use of whipped cream makes it a very pretty drink, and also very similar to the Viennese coffee.

If you're looking for a smoother, sweeter drink

Then espresso con panna is for you. It's also a little fancier, in that is just looks so much better than anything you've ever seen.

This is more of a 'sit down and people watch" kind of drink than anything else. It won't deliver a strong caffeine kick as others might, even if there is that espresso shot.

The reason is that cream slows down the caffeine's effects, and also slows down digestion.

So it's a good morning coffee, if you'd rather have a gentler wake up than a pure shot of adrenaline.

The milk froth on top of the macchiato isn't meant to change the drink very much, only a little.

If anything, it's just going to take the edge off the espresso and make it a little less bitter.

Of course, this also depends on just how much milk froth is on top of your espresso.

Normally there should just be a teaspoon, for aesthetic reasons as well as not to dull the coffee.

But often enough you;ll find an entire layer of milk froth, even if it's just a thing one.

If you're looking for a quick caffeine kick

Espresso macchiato is for you. It's really the strongest o the three drinks we're discussing right now.

It uses a shot of espresso, just like the others, very true.

But it's also got the lowest amount of milk or dairy products, which will interfere with the caffeine a little.

So if you're looking for a quick fix and a drink that's gone in two gulps, there you are. 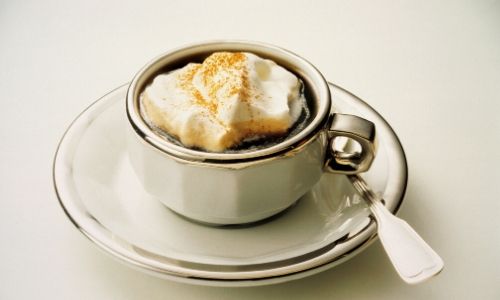 Why use vanilla ice cream ? Other than it being just so good with the bitter, earthy tones of espresso ?

It's the traditional way to serve affogato, and it was also one of the most commonly available ice creams at the time the affogato was invented.

Of course, you can find affogato with pretty much any number of flavors that go well with coffee. Banoffee, caramel, chocolate, pistachio, you name it, someone's probably done it at some point.

One of the best affogatos I've ever had was made right in my own kitchen, with hazelnut and vanilla ice cream.

If you're looking for a desert-like drink

Then affogato is the way to go. It's coffee, so you get a nice bitter touch.

It's also ice cream, which is sweet and cooling and definitely something most folks love in the summer.

And it's a bit of an unmixed milkshake, in a way. Let the ice cream melt a little and mix the slush a bit and voila, you've just made yourself a quick coffee milkshake !

Affogato, macchiato and espresso con panna are all great ways to really enjoy the flavor of a good espresso.

It's just that they offer it a little differently, and they each deserve a spot on the menu, for different occasions.

Personally, I'm a fan of espresso con panna. There's just something fancy about whipped cream on espresso, plus the contrast between the two colors.