The differences between a flat white and a latte can be plenty, and at the same just a couple. After all, both drinks are espresso based, and require some form of steamed and frothed milk.

How, then, are you supposed to know which you'd like to order ? By comparing them and noting each difference, of course ! So let's start. 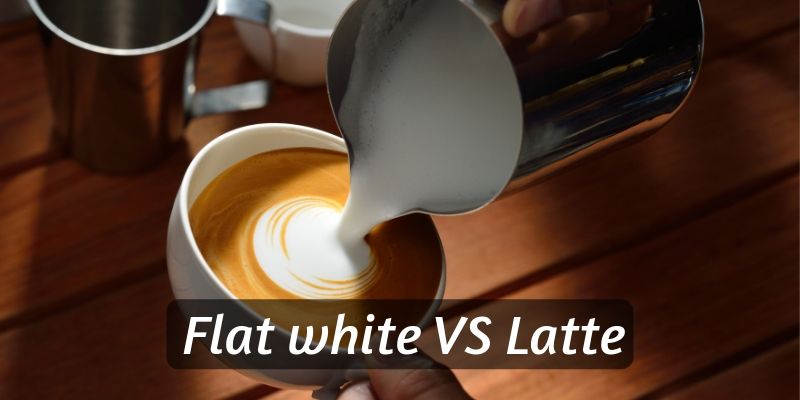 The structure of a latte and a flat white

Before we begin actually comparing the flat white with the latte, let's take a look at each drink, and how they're made.

A flat white is 1 part espresso, and 2 parts velvety microfoam. It has no thick frothed milk on top, which lends it a flat appearance. The texture is smooth and velvety. There is no latte art, but a smooth, tan color which is the crema mixed with microfoam.

A latte is 1 part espresso and 5 parts steamed and frothed milk. It does have a thin layer of frothed milk on the top, and almost always the barista will bother to make some sort of latte art on top.

These are the basics. Most of the differences between these two milky drinks lie in subtle changes to the structure of the milk or just the overall size.

Here's the main differences between latte and flat whites.

1. Flat white only has microfoam

When a barista steams the milk, she will form 3 layers of milk. Exactly how much of each depends on what she's trying to achieve, but it's always going to be a ration between steamed (liquid) milk, microfoam, and thick milk froth.

The more liquid parts (the steamed milk and microfoam) end up towards the bottom of the metal pitcher.

A flat white will only use microfoam, which means the barista will have to produce very little froth or steamed milk. This also means that when the microfoam is incorporated into the espresso, it's a simple process since it mostly just requires pouring.

On the other hand lattes contain steamed milk, microfoam, and frothed milk. For this baristas have to put in more effort, since they have to first add the steamed milk, usually by holding back the microfoam and froth with a spoon.

Only afterwards is the foamy milk allowed to lay on top of the drink, and this is usually done with a lot of skill, resulting in what we commonly know as latte art.

2. Lattes have latte art, flat whites do not

Why does the way the milk is poured result in latte art or not ? The answer is that flat whites do not have any thick frothed milk. This means that there isn't really much to play around with in terms of coffee art.

The way frothed milk works is that it has a similar structure to the crema made by espresso. This means that when the milk is poured for a latte, the froth will end up as a beautiful contrast to the tan-orange crema. And they will both keep their shape and structure.

On the other hand, microfoam cannot hold the same shape and structure as frothed milk. This is because it's more 'wet', and has a smaller amount of air to keep it all fluffy.

This is actually one of the main differences between wet and dry cappuccinos, by the way.

3. Flat whites evenly blend the espresso crema with the microfoam 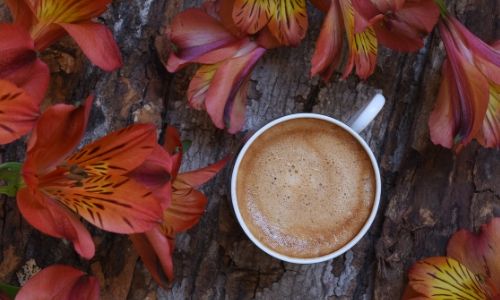 And it also results in a flat, uniform, tan-orange layer of microfoam mixed with crema. There is no latte art since there can't be any in this kind of structure, there is nothing to contrast it with.

However, this isn't the case with a latte. In fact, a latte relies on keeping the crema and milk froth separated for as long as possible, until it's time to make those pretty designs.

Then, through a series of motions the remainder of steamed milk and froth is poured through the upper layer, resulting in lines, hearts, and leaf patterns.

4. Flat whites have more coffee, and less milk than lattes

Another difference between flat white and latte drinks is the fact that lattes tend to have a more mellow coffee flavor, as compared to flat whites. Flat white have much less milk content - about 60% - than a latte.

A latte has about 80% or more milk, in one form or another. This means that the flat white will have more of a coffee flavor than the latte.

To offset this, lattes are usually made with a double shot of espresso, so you can still taste the coffee through all the milk.

That being said, even a double shot with lots of milk will be weak in comparison to a standard shot with some milk.

There is also the structure of the milk used to keep in mind. Latte contains actual, steamed, liquid milk which cuts through the coffee flavor better than microfoam.

After all, microfoam is foam, even if it's just a very fine one. There is more air in it than steamed milk, meaning there will be less to cut through the bitter coffee.

If volume and serving size is something you look out for, then you should know right away that lattes are almost always larger than flat whites.

This has to do with the general guidelines used to make each drink. A latte calls for way more milk and preparation than a flat white, resulting in a larger and more voluminous drink.

The latte is larger both in terms of volume and weight. They're usually between 12 oz/350 ml to 16 oz/470 ml, depending on where you're getting them from.

A flat white is usually served in a 5 oz/150 ml cup, and as such is immediately recognizable through its small size. Starbucks has been known to offer flat whites in Grande (16 oz), so you might be rightfully confused in some coffee shops.

Also know that the rules and recipes for making the lesser known, more recent coffee drinks are kind of .... well, they're more what you'd call guidelines, than actual rules (to quote Cpt. Barbossa).

6. A flat white is generally smoother and more velvety in texture than flat white

Due to the fact that flat whites contain mostly microfoam, this leads to a very smooth and velvety feel when you're actually drinking the coffee.

To you it might matter, or it might not. But many people have commented on this, and it's apparently a trademark of a good flat white.

This means it's going to be a bit harder ? maybe ? to drink than a latte, since the entire drink is a little on the thicker side.

But it also means you won't burn your tongue, as you sometimes might when drinking a freshly brewed latte.

A latte will be smooth enough on its own, mostly in terms of flavor and the wonderful hot milk flavor, even if it won't be as thick as a flat white.

Similarities between flat whites and lattes

Alright, you know the key differences between flat whites and lattes now. But these drinks also share several similarities, and I think they deserve a little love as well.

For starters, both drinks are espresso based. This means that they're going to have the same base flavor, and only the amount and texture of the hot milk is going to change their final taste.

And most of the time the kind of espresso shot is going to be a double shot, whether it's a latte or a flat white. This means that the coffee flavor will be more distinct in flat whites, yes, but just enough to really make this drink stand out, without being overwhelming.

Another similarity is the fact that both these drinks share a special love for microfoam. Yes, a latte also has steamed milk and some frothed milk on top, but really the bulk of it is microfoam.

A flat white has only microfoam, which makes it thicker and creamier, but a latte is not that far behind, mind you. And really when it comes down to it, it seems microfoam is really the best kind of milk froth possible - smooth, creamy, and delicious.

Yet another thing a flat white and a latte share is a distinctive look, each in their own way. Both drinks are really pretty and impressive to look at.

The latte because it's really the mother of all latte art enthusiasts, and you can try your hand at making any design your little heart would like.

And the flat white is striking due to its smooth, uniform tan surface. No other coffee drink looks like that, and really that's kind of impressive. Folding/blending microfoam with crema to make this color and texture is kind of an achievement, and you won't find it in any other drink.

Flat whites and lattes are two very flavorful and beautiful drink, but which should you choose ? In my opinion a flat white is more for those looking for a combination between a cappuccino and a macchiato - a bold coffee flavor, but nicely rounded with creamy microfoam.