Looking to make a fresh cup of French press coffee, but you're not sure what size grind to use ? That's a common question, since grind size isn't something very much discussed between regular coffee drinkers.

What does it matter what size grind you use for a French press ?

As it happens, it does matter, and there's a very specific size you'll need. Let me help you out. 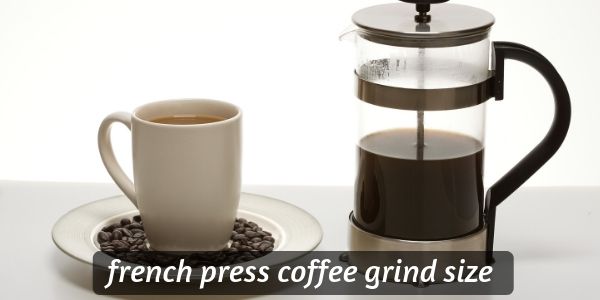 So what is the French press coffee grind size ?

The grind size you'll need for a French press is the coarsest setting on your grinder. The pieces are usually the size of sea salt flakes, and they will feel very rough to the touch.

This size is necessary since French press has a long steep time. The longer the steep time, the larger the grind.

Or, the larger the grind, the more time water needs to fully extract everything.

If you were to use any other grind size (too large or too small) you'd have a disappointing cup of coffee, for several reasons that I'l talk about as well.

Your best bet to getting an even and consistent coarse ground would be to use a burr grinder. Those are more reliable than blades, and will break the coffee into very similar pieces.

Can you use regular ground coffee in a French press ?

No, you can't. The reason behind this is that 'regular' ground coffee is usually a fine grind, which is much, much smaller than you need for a French press.

You see, the way the french press works is that is traps the grinds and most of the silt at the bottom of the beaker. This happens with the help of a metal filter, which does have some wire mesh to help keep things in place.

But its holes are much too large for the fine ground coffee. Which means all that coffee is going to get right into your cup, which isn't exactly tasty or even healthy.

So, that's the main reason you can't use regular ground coffee in a French press.

But let's say you had no other option that to use that. What would you do ?

You'd need to filter your coffee, one way or another.

So you'd be making French press as usual, only with fine ground coffee. Then, once you've pushed the plunger, you'd need to place the filter inside a metal sifter, and pour the coffee through that, into the cups.

The sifter with the filter inside will catch the ground coffee and much of the silt, so you'd end up with a very clean and clear cup of coffee. Much like regular drip-filter coffee, actually. Except you'd have a longer brew time.

Honestly if you're in such a situation you're better off making coffee in a pot. Easier to clean up, and still uses fine ground coffee. 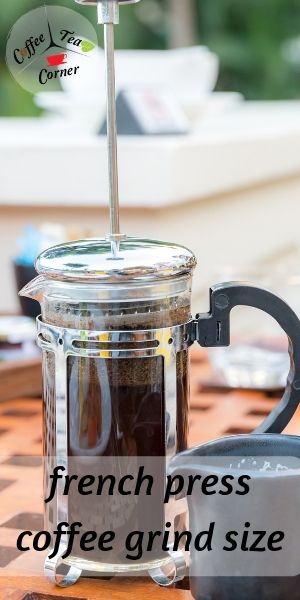 Does the grind size in French press affects its strength ? You could say that.

The thing is, the more you let your coffee steep, the more caffeine and aroma you'll get out of it.

Of course, you need to keep in mind the size of the grind you're using.

A coarse grind, like for French press, is going to withstand a longer brewing time, like 3-4 minutes.

In fact, it actually needs a longer brewing time in order to extract everything it's got.

So you could say that yes, French press is stronger than other coffees. But this is mostly because other coffees use a smaller grind, and can't brew for more than a couple of minutes, or even a few seconds (like espresso).

It's also stronger than filter coffee, or Turkish coffee, though not by all that much.

Still, it remains one of the most efficient and flavorful ways to brew a cup of coffee.

What's the best roast for a French press ?

Another thing to keep in mind, when you're looking for make a cup of french press coffee, is that the roast level matters here.

Since this is a brewing method that's going to give you a very flavorful cup of coffee, it's going to need to be a very good roast level.

This usually means a medium roast. This is because a light roast gives you more of the fruity, specific flavors of the coffee bean you're using.

But they can sometimes be too 'green', or taste a bit too light as they have very little body to speak of.

A dark roast is going to taste almost too harsh in a French press, since its toffee and dark caramel tones are going to brew very rapidly, which also means it's possible to over extract this in a  French press.

It will have more body than a light roast, but it's also going to be 'too much', at least for most people.

So, the way to go is with a medium roast, possibly medium-dark if you're into a stronger coffee taste.

A medium roast in a French press will really shine. It will have the perfect place to showcase its flavor and the subtler notes, provide your cup of coffee with ample body and mouthfeel, and still be wonderful to drink black.

The addition of the natural coffee oils and longer steep time is going to make a great cup of coffee if you use a medium roast.

How much ground coffee to use in a French press

When you start brewing a cup of French press coffee you will need to use 7-8 grams of ground coffee, for 200 ml of water/6.7 oz.

French press does press the coffee and leave you with as much liquid as possible, but a part of it will be lost to the coffee.

So, you'll probably end up with 180 ml/6.1 oz of actual, drinkable coffee. Which is actually plenty.

This is for one serving, and if you're going to serve more people, keep in mind that the size of the French press will also be a factor. You have to factor in how much space in the Press the ground coffee will take up, and how much water you can safely add to that.

French press is a wonderful coffee, and it's pretty much the best way to brew coffee so you get both flavor and caffeine. It take a bit longer, but it's worth it.

The only thing is you have to use only coarse ground coffee. Anything smaller than that is going to go right through the press' filter, and you'll be very unhappy.