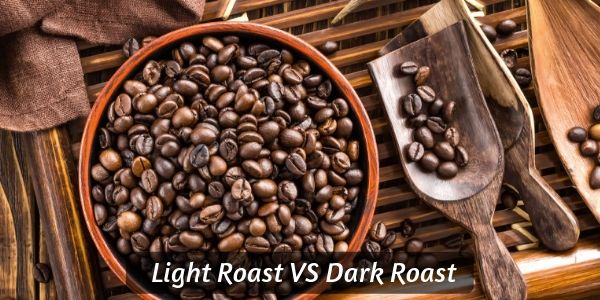 Are you trying to figure out which roast type is better ? As you read this article you'll notice that both light roasts and dark roasts have their good and bad sides, and which you choose is up to you.

There's also the fact that some bean types are better off light or dark.

But let's see those differences between light and dark roasts, so you can choose which you'd like more when you next buy coffee.

Crash-course for those who are unsure what roast levels are

If you've never really heard of coffee roast levels, don't fret. No one except die-hard coffee fans has. Okay, maybe the coffee industry.

But most folks who just drink coffee for fun don't really know about roasting. Well, let me help you understand the basics.

So, the coffee tree produces coffee cherries. Those cherries are picked, the pits are removed, and then they're left to dry. Once dry, they look a little odd. Actually they look pale green, and definitely not like what you'd expect form a coffee bean.

But once dry, they're sent off to be roasted in an over, for a certain period of time, and a certain temperature.

A high temp, and longer roast time yield a darker roast. A shorter roast time and low temp can yield a light roast.

A light roast is the absolute minimum for coffee beans to be drinkable.

A dark roast is almost too much, and you risk losing the actual flavor of the bean and ending up with just a 'burnt' taste.

Roasting coffee beans is a very delicate process, and as such variations in batches will appear.

So there you go, now you know the bare bones of coffee roasting. now let's get to comparing the two extremes.

When you brew a cup of coffee, you hope to get a nice, tasty, caffeinated drink. But it's not always like that.

If you end up with a very dark roast (above medium dark) your coffee will mostly lose its specific notes, and resemble most other dark roasts.

This is because during the roasting process the coffee bean's oils rise to the surface, and in a darker roast they're often burnt and this lends a very dark flavor to the final brew.

And since this influences the final taste of the brew, whatever specific flavor was in your cup of coffee is now gone. It's hidden under notes of toffee, peanut, dark chocolate.

With a light roast, the origin of the coffee is more pronounced.

This is because the roasting process is stopped before the coffee oil ever reaches the outside of the coffee bean. It also means that the delicate notes of the coffee aren't exposed to too much heat, and your cup of premium coffee will retain its nuances that made it premium in the first place.

For example fruity tones will remain, as will honey notes, which are pretty much burnt away in a darker roast.

Now, each bean has its own potential. What it can bring to the table (cup ?) in terms of flavor and complexity. A light roast stopped at just the right time will allow the coffee to showcase it's beautiful nuances.

But it can't showcase what it doesn't have, which is why not every bean is light roasted. More on that later in the article.

Since we discussed in such detail how great light roasts are, let's take a moment to praise dark roasts.

As a dark roast burns away the subtle flavors of a coffee, it also means that it will be able to bring out the toffee, caramel, dark chocolate notes in almost any kind of coffee bean.

But in general, if you have a low quality bean like Robusta, you can roast it to a dark level and it will taste good enough for most people. Not on its own, mind you, since most Robustas are terrible if brewed on their own. They're pretty good in a cold brew, though.

But they will taste better, if you've got a sub-par crop this year, or want to cover up a particular taste.

This is one of the reasons some people straight up hate dark roasts. These people are usually the ones that love light coffee, and they hate the dark because it ruins the delicate nuances in some bean types.

But dark roasts have their uses, and as such they're sill on the market today. 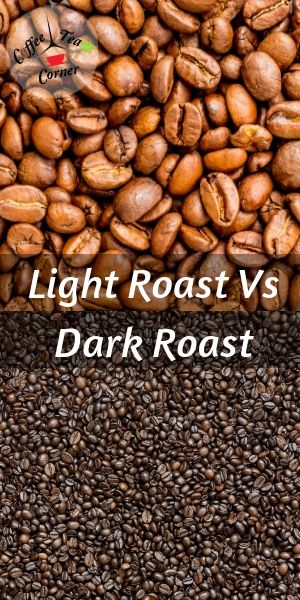 3. Dark roasts offer more body and texture to the cup of coffee

This is one of the reasons dark roasts have a place on the market.

They offer more body, and a more definite 'mouthfeel' to the cup of coffee.

Lighter roasts tend to taste a bit watery or weak, aside from all the flavor they offer. This is mostly because light roasts don't have the oil sheen on the outside, and they don't start to dry out as a dark roast.

The coffee oils offer even more depth to dark roasts, which again makes the coffee taste stronger, or more defined.

Of course, there is such a thing as too much body. A very dark roast will produce a coffee bean that grinds down too easily, and produces a lot of coffee dust.

Which in turn can make the coffee too cloudy and definitely require a paper filter to keep out all the gunk.

4. Lighter roasts can only be brewed in certain ways

Since light roasts are so delicate, their notes won't always be obvious in just any kind of coffee brewing method.

For example an espresso or Moka pot won't be able to do a light roast any justice. This is because they use water that's too hot, and doesn't stay in contact with the coffee grounds long enough.

This results in only the top notes of the coffee being extracted, since there isn't enough time.

And even those top notes won't taste as great as they could with other brewing methods.

For example the French press is the best candidate for a light roast, since you're completely in control of how hot the water is, and how long you let it steep.

This is also true for making coffee in a pot, and also for Turkish coffee, as long as you don't bring the pot to a second boil after adding the coffee.

A dark roast however has lost much of its specific flavor, and doesn't really need to be brewed in a certain way. This means that any brewing method, be it espresso, drip filter, Turkish, Moka, or anything in between will all work just as well.

Most of the time - not every time, but most of the time - you'll find that dark roasts are made with Robusta beans. This is mostly due to the fact that Robusta tastes pretty bad for most people.

It has its good moments, yes, but for the most part it tastes too strong and harsh if you brew it on its own.

So a darker roast is pretty much the way to go with Robusta, since it can handle it pretty well and it also makes the general flavor of the bean better.

A lighter roast is most often an Arabica bean, which should come as no surprise given how flavorful those beans usually are.

This is mostly because Arabica has twice the fat and sugar content of Robusta beans, but half the caffeine. This makes it the perfect candidate for a light roast.

However this also means that an Arabica can't really handle a roast part medium dark very well, as its flavor will start to break down very fast near that point.

This is just one of the many differences between Arabica and Robusta beans.

6. Light roasts are a bit more expensive than darker roasts

This is due to the low crop yield of Arabica trees, and due to the large demand from clients, and dues to how prone it is to some disease ans pests, and also because top top everything off, Robusta trees produce too much in the first place.

So this all contributes to making the Arabica bean some sort of princess of the coffee industry.

This also means that Robusta beans are devalued, and since they're usually the ones that end up in a dark roast, a dark roast is cheaper.

Finally, there's also the fact that lighter roasts require a keen eye, ability to judge the coffee's roast level by sound (or cracks like popcorn), smell, alongside everything else.

So, if you really want a light roast that's good, you have to know what you're doing. This means more attention, and better paid workers. Which again, translates to coffee that's more expensive.

It's easy to reach the dark roast level and then turn off the ovens, but it's much more difficult to stop it at a light level.

There are 3 main levels of roasting coffee

Now, you know the main differences between a light and dark roast.

You should also know that neither roast level is 'the best'.

A happy medium is just that - medium. Some might insist that a medium-dark is even better. To each their own, I say.

In fact, many coffee brands stop their roasting at the medium point, as it offers the best balance between complexity, but also body and mouthfeel.

So the next time a coffee boasts about being light roasted, remember that it might not necessarily be a mark of quality, but possibly a gimmick to make it seem better.

Whichever roast type you like the most, You're not very much aware of what the other tastes like, and why it's valuable.

I've had both light and dark roasts over the years, and if I were to choose and there were no middle ground, I'd go with dark roasts. Just because I add sugar and milk to my coffee, and those balance the dark roast.

« Does Lemon Tea Have Caffeine ? Find Out If Your Tea Is Safe
How Grind Size Affects Coffee - From Finer To Coarser Grinds »