Want to make French press coffee, but you're not sure about the coffee to water ratio ?

No worries, everyone's been stumped on that one.

And after all, coffee is a very subjective thing. One person's strong coffee might be another's medium, and if you're brewing for a crowd it's going to be hard to please them all.

That being said, there is a certain ratio most folks follow. But it's a fairly wide one. Let's get into it. 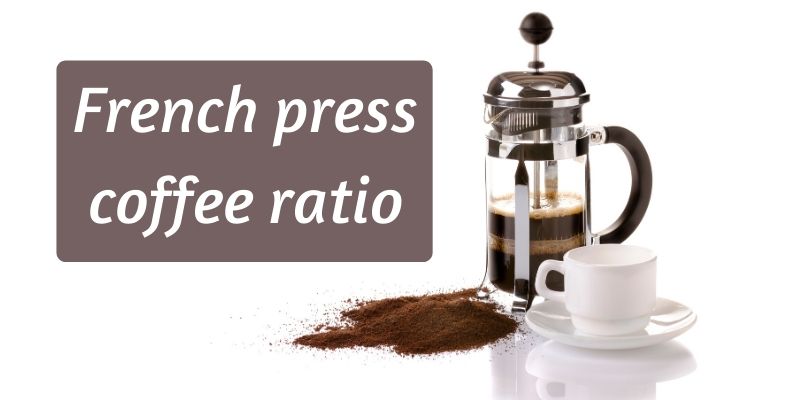 How much coffee should you use for a French press ?

No one really knows the definite answer to this.

In that, we all know we should use about 10 times more water than coffee when brewing, but how does this apply to French press ?

Well, I've had French press strong and mild and anything in-between and enjoyed both.

I mentioned there's a wide ratio folks use when making French press. It's wide indeed, going anywhere from 1:10 coffee to water, all the way to 1:16 coffee to water.

The smaller the ratio (like 1:11) the stronger the brew, and you can use that as a guideline.

But just how strong is a 1:10 French press coffee ?

It's nowhere near an espresso, since that uses a 1:4 coffee to water ratio. That's 7-9 grams of coffee for 33 grams of brewed espresso.

If you're trying to emulate an espresso in your French press, there's no point since it's going to be a completely different drink.

There is no such thing, as a widely accepted truth.

But, we each have our own preferences and we can definitely tailor a cup of French press to what we love.

Keep in mind a few things when deciding how much coffee to add to your French press.

Just a heads up, you're going to need a pen, paper, and a bit of patience since you'll need to think about a few things before settling on your final ratio.

A few trial brews might be needed so you get the ideal ratio for you liking.

Here's what you're going to need to think of when deciding this:

1. How big your French press is

The size of your French press matters, very much so. This is because whatever ratio you decide on, it's going to have to translate into ml/oz of brewed coffee.

For this reason, it might be easier to start with an even number.

So for example if you're looking to figure out the ideal ratio for you, you might want to brew with 30 oz of water, instead of the maximum of 34 that your French press might be capable of.

Also, make sure to write somewhere how many oz of coffee you usually end up with in your cup of coffee, and then you should also weigh the amount of ground coffee you use.

As an example, if you usually end up with 12 oz of brewed coffee, you'll need to:

Say you use 10 grams of ground coffee for those 12 brewed oz. It would be 13 oz of liquid, counting the one that's left behind, and now we need to convert the water to milliliters. 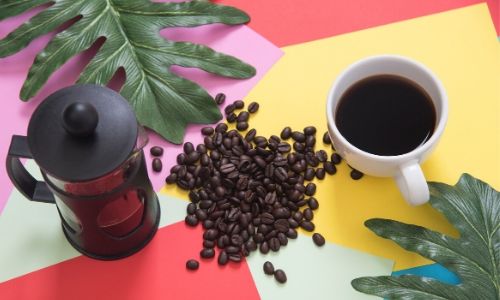 2. The starting strength of your coffee

Another thing to keep in mind, not every coffee pack is the same.

Not every pack of coffee is 100% Arabica, some may contain 25% Robusta, some may have even 50%. Make sure to check on the label.

On average, pure Arabica coffee is weaker but more aromatic than Robusta.

Robusta is more caffeinated, stronger in terms of taste, but really needs some sugar and milk.

So if you usually use a 1:10 ratio for French press with a 100% Arabica bean, then a blend that's got a 30% Robusta can't have the same ratio. It would end up too strong in your cup.

Instead adjust the ratio, and aim for a 1:12 in this case. The stronger the coffee, the higher the ratio so that the end product is similar to what you usually prefer.

In short, if you're using stronger coffee, use more water so you get a similar cup of coffee as with a weaker coffee.

3. Whether you're adding milk or not

Milk and creamer are a great way to really tone down a strong cup of coffee, and you need to allow for this.

Do you like your coffee with a strong taste that shines even through milk and creamer ?

Then you'll need a low ratio, like 1:7 if that's what you're after. A lower ratio will yield a stronger cup of coffee.

If you were to use a 1:10 ratio, after adding the milk it would be too mild for what you were probably after.

Always take into account if you're diluting with milk/creamer, and if you're adding sugar.

Ratio, shmatio. In the end we all brew out coffee the way we like it.

Just know that a lower ratio means a stronger coffee, and a higher one a weaker coffee. So, take a look at your preferences and experiment from there.

« Earl Grey With Milk ? Here's How To Make It (No Curdling)
Does Ginger Tea Have Caffeine ? »