So you want to make French press coffee, but you're not sure just how to go ahead ? No worries, I'll guide you through this process and help you get the best cup of French press possible.

Making French press coffee isn't hard, but it does require some observational skills and takes about as much time as brewing tea.

So let's get on with it. 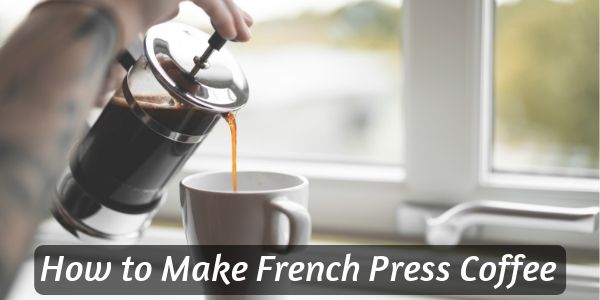 What you need for French press coffee

First, you'll need the French press itself. We'll cover that later in this article.

And you'll need any sort of timer, like an kitchen timer or even the one on your phone.

And really, that's it. That's all you need to make French press coffee.

To be fair, if this is your first time making French press please remember that you're going to need to be there, next to the coffee while it brews.

How to make French press coffee

First, you need to measure out the French press you've got. How much water will it hold ?

For example if it holds 32 oz of brewed coffee, keep in mind that you won't be able to fill it with 32 oz of water, because the ground coffee will displace a lot of water.

So account for the fact that about 25% of the total content in the press will be ground coffee.

Once you've got your water measured, decide how much coffee you want to make, keeping in mind the total amount of brewed (water+ground coffee) your press can hold.

This means that about 2 oz will be left with the ground coffee, so plan on using 18 oz total.

Heat the 18 oz of water, and bring it just under boiling point in any pan. Set it aside.

Get the French press, and remove the top half, along with the plunger.

Add about 15 grams (3 heaping teaspoons) of coarse ground coffee for each cup. So a total of 30 gr/6 teaspoons.

Keep in mind that this is for a strong cup of coffee, so scale the coffee down if you want a lighter one.

Place them at the bottom of the press, and add a small amount of hot water, it doesn't need to cove the coffee.

The coffee bits will get slightly larger, and might bubble. This is normal, and it's called blooming. The coffee releases some natural gases this way, which is necessary.

After the coffee's bloomed (half a minute), add the rest of the water.

Set a timer for 4 minutes.

Then, put the top of the French press back on, but do not push the plunger down.

Watch the coffee, as the grounds will sink to the bottom and the color (and caffeine) will slowly release from them.

When the time rings 4 minutes, slowly push the plunger down. You should take your time doing this, as it will oppose your at first and pushing it too hard won't help at all.

Once the plunger has separated your ground coffee from your brewed coffee, you're free to serve the coffee.

If you already have a French press, feel free to skip over this section.

But if you don't... well, there's no way or making French press coffee without a French press, is there ?

So what you're looking for is a strong, glass beaker-type of container. It should hold as much coffee as possible, but still be easy to wield.

For example this French press by KONA is a 34 oz version, with brewed and ground coffee included.

It's one of the largest French presses out there, and is reliable enough to bring you a fresh cup every morning. Or whenever you like to take your coffee.

Both the casing and the handle are sturdy, and the plunger goes down easily enough.

If you're brewing for a crowd, a French press like this one will make sure you can offer each guest a cup of coffee, eve if it's a smaller one.

You can check the listing on Amazon for this press, and read the reviews as well.

Once you've got your French press, you can experiment with brewing in it for different time lengths, to see the effect on the brew.

How many scoops of coffee for French press

You're going to need a bit more coffee for French press than would be normal for a cup of coffee.

For a strong French press coffee, you'll need about 15 gr (3 teaspoons) of coarse ground coffee, for an 8 oz cup of brewed coffee.

This is because you're using coarse ground coffee, and this one brews more like coffee really should.

An espresso machine uses pressure and heat to brew very finely ground coffee. This speeds the brewing process greatly, basically stripping the ground coffee bean of everything it has.

Which is good, because it's giving your everything the coffee has.

But it's also making your think all coffee brews fast, and fully.

In truth, coffee brews at a much slower rate than an espresso, and it's going to give you most (but not all) of what it has.

In a French press coffee brews at its own pace, and it's really not that quick. It takes about 4 minutes for coarse ground coffee to fully brew in hot water. Ideally you'd be using 93 C/200 F water, but that's not always possible.

So, your coffee will take a bit to brew, and this means that you're also going to need a little more coffee than usual because you're looking for a more concentrated coffee than filter or Moka for example. 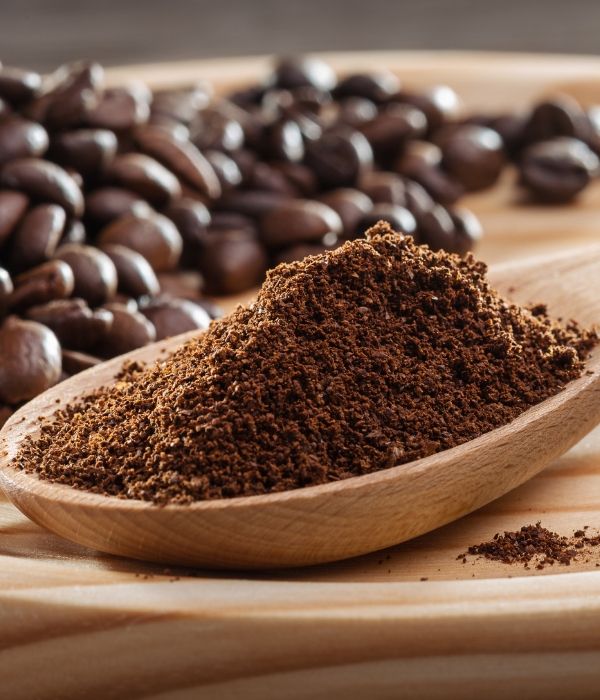 Why you need coarse ground coffee for French press

You might be wondering why you need coarse ground coffee for French press, if it means the coffee will need more brewing time.

Well, the answer lies in the difference between grind sizes.

A fine grind size brews fast, but it's got a higher change of giving you unwanted notes, like sour and acidity or more bitterness.

This is because of how fast a small grind brews, usually faster than you can stop the brewing from happening.

Which means that the larger the grind, the more refined the coffee taste, since the hot water will only draw out what it needs to in order to give you good coffee.

This has a lot to do with those 4 minutes I said are necessary for a cup of French press.

If you let the coffee sit for longer than those 4 minutes, it will get too much extraction, and will resemble fine ground coffee. Which is not what we're aiming for with French press.

The whole point of French press coffee is to provide you with a flavorful cup of coffee, which means you are in charge of how hot the water is, hot large the grinds are, and how long you let the coffee brew.

All these contribute to the perfect cup of French press coffee. And you need coarse grounds for that.

Your best bet is getting a burr grinder, as opposed to a blade one since you get more uniformly cut coffee.

Do you need to filter French press coffee ?

You might wonder if your French press coffee needs any additional filtering.

Really, that's entirely up to you. A cup of French press coffee will have essential coffee oils extracted into your drink, and you'll get a nice body/mouthfeel in your cup of coffee with this method.

This is because a little of the very fine coffee dust that forms when the coffee is ground, will end up in your brewed coffee. Which is actually great, since it provides you with a very definite cup of coffee, and it won't tastes 'thin' or watery.

If you were to filter it (which you could, more on that here) you'd lose a lot of what makes French press so special.

You'd lose the little coffee dust I mentioned, and you'd lose the coffee oils. Both provide flavor and texture to your coffee.

But if you want to filter it, go ahead. I recommend paper filters for this, since they catch the oils best.

Yes, actually in my opinion French press is the best black coffee.

You see black coffee is the best way to really tastes a coffee's origin. This means that any specific flavors and notes are going to be very well highlighted in a French press coffee since it's one of the best ways to brew coffee.

Actually, if flavor and subtle notes are what you're looking for, French press IS the best coffee brewing method.

In a cup of black French press you'll be able to taste everything you might miss in an espresso or a cup of Moka.

It will take milk and sugar well enough, but I recommend you try it black just one time.

What makes French press so good

It's the gentle, slow brew that make french press such a great way to brew coffee.

When coffee is brewed at a slower pace, it's not forced to release everything it's got.

This means that you won't get an inordinate amount of bitterness or acidity from a French press, unless you let it brew for too long or use boiling water which will scald the coffee.

If you were to use water cooler than those 200 F/93 C, you'd also need to add a minute or two to the brewing time.

For comparison, cold brewing takes several hours (even 20) and comes out with very little bitterness, and nearly no acidity.

This process is very similar to the one used by the French press, in that coffee is allowed to seep at its own pace.

Another reason why French press brews so beautifully is because it uses those coarse grounds.

Coarse grounds mean longer steeping time, yes, but they also mean something else.

A coarse ground coffee will release more notes and specific elements from the coffee's origin flavor that might otherwise be lost with other brewing methods (like espresso for example, which uses the finest grind there is).

If you were to use fine ground coffee, and add an extra filer to the French press to make sure you catch everything, your coffee would need to brew for a much shorter time.

And you'd get an effect very similar to a standard drip filter coffee.

Again, the grind size does matter, and there is no better grind than coarse for a French press.

When making French press coffee, you're going to need a little patience.

Now only for the brewing process itself, but also to get it right.

In time, after several tries, you'll get to know when your coffee is done just by looking at it. But that takes several weeks of practice, constantly making French press.

Best bet would be to always use a timer.

And remember that you can always get a different coffee than the one you usually get, and brew that with a french press, and see how it will turn out.

It might just show you a whole other side of that coffee, that you didn't know before.