Wondering if you should get an Aeropress or a French press ? Both are great ways to brew your morning coffee, but they offer different experiences.

Which would be better for you, and your daily needs ?

I'm going to compare the two, so you can clearly notice the difference between the two methods, and pick the one most suited for you. 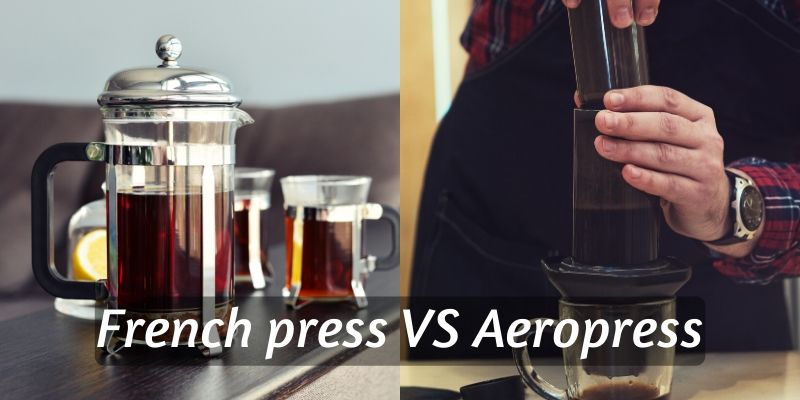 1. Aeropress brews close to an espresso

Now, most folks love a good espresso. The trouble is, an espresso machine can often be expensive, especially a really good one.

This is where the Aeropress comes in. The way it brews the coffee - pushing hot water quickly through the fine ground coffee - is similar enough to espresso to make it a favorite for some.

It's not a true espresso, no sir. But it's pretty close to it, especially for something that's not even meant to make espresso.

There is crema on top, yes. Or at least you can get a thin layer of crema if you brew it right. But you should still remember: it's close to an espresso, but not a real espresso.

A French press will brew maybe similar to Turkish coffee, but that uses a different coffee grind. It's going to taste different, and have a completely different feel to it.

You can't really compare it, since it's its own coffee.

2. French press coffee is grittier, has texture and coffee oils

Due to French press not using any paper filter, there's going to be some texture and body going on.

There won't be chunks of ground coffee in your cup, but there might be very fine sediments that will pass through the metal mesh and filters on the press' plunger.

Also, you'll notice coffee oils. Not a pool of oil, but a very thin sheen of essential coffee oil, since there is no paper filter to catch them.

This all leads to a cup of coffee that's going to be a little darker than Aeropress, and definitely more flavorful.

A cup of Aeropress coffee won't have fine dust, grit, or coffee oils since it uses paper filters to catch them before they even reach your cup.

Also, you can brew your Aeropress as strong or weak as you like, leading to a difference in taste and texture as well.

What you'll notice though, is that Aeropress might leave you with something very similar to crema, when you're done brewing. This isn't really found in French press coffee.

In a French press, the coffee will bloom and then the foam will die down in the 4 minutes it takes to brew. The Aeropress doesn't allow that much time, and due to the pressure you put on it, will produce something very similar to crema.

It will disappear in a couple of minutes though, since it's not as stable as true espresso crema. But it's at least something. 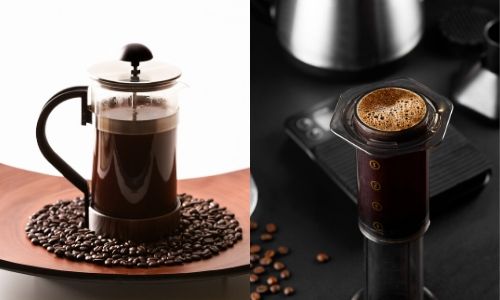 Another thing you might want to keep in mind, Aeropress and French press use veeeery different ground coffee sizes.

This is important, because it can dramatically change the taste of your cup of coffee.

In general coarse ground coffee tends to brew a less acidic, and less bitter cup of coffee. It ends up being more flavorful then bold, and will definitely release all the caffeine it can because it needs a longer steep time.

This is what's used for cold brew coffee by the way, which is known for its mild sweetness and great flavor.

On the other hand, when brewing with an Aeropress you'll need fine ground coffee. This is because the brew time is short, and this is meant to be a quick cup of coffee.

Meaning, you're going to get an intense cup, with quite a bit of body to it since fine grounds tend to leave a little coffee dust in the cup. Even if your Aeropress uses a paper filter, it'll have more body than regular drip coffee.

This translated into a bold cup, one that's going to impress you with its strength rather than flavor. Results will depend on the water to coffee ratio you're going to use.

If the material your coffee maker is made of is important to you, then you should know the French press is mostly glass and metal, while Aeropresses are entirely plastic.

The French press is glass partly because it holds up really well in the aroma-over-time-department, and because it just looks great.

The plunger and filters are metal, and that's always stainless steel.

You may find some plastic parts in an French press as well. Most notably the lid/top of the plunger, and that is in contact with your coffee for a very short amount of time. Only a few seconds while you pour the coffee.

An Aeropress is entirely plastic, however it says both on their official website, and their Amazon listings that their plastic is BPA free, and phthalate free.

So there will not be any harsh or harmful chemicals entering your coffee. Even so, some folks might still be against suing plastic for how drinks or foods.

If that's you, then a French press might be better for you.

One thing to note, though: hard plastic, like the one used for Aeropress, tends to break harder than glass beakers. There have been reports of French presses getting hairline cracks by just being washed or lightly tapped against other dishes.

So if you do get a French press, it needs to be in a good, protective casing. 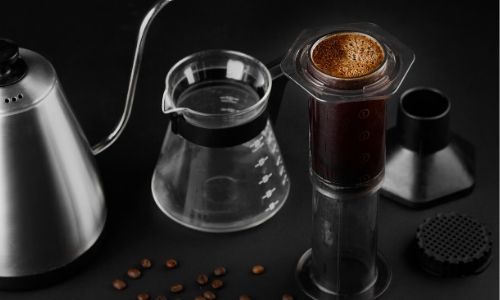 Another item which might be a make-or-break thing for some: the Aeropress doesn't brew in large amounts. In fact, you can only get them in sizes that are like 4 cups.

Each cup is a 5 oz/150 ml serving, so keep this in mind when making your decision.

If you're the kind of person that routinely drinks 20 oz of coffee per day, you're going to brew a whole lot of Aeropress coffee.

However, if you're more into small cups of coffee then resemble an espresso, you might love the Aeropress for providing just that.

This means you'll be able to brew a big mug of coffee in the morning, if that's what you're after. Or, you can serve more than 4 people at a time, depending on how large your coffee cups are and what size French press you got.

Not hours long, just about 4 minutes are enough to brew an entire press.

Maybe this isn't a deal breaker, maybe it is. If you're in a rush in the morning and you really need that cup right now, then you're going to have to wait a little for the French press coffee.

An Aeropress is done in under a minute,depending on how fast you push the plunger and how much coffee you're making.

Please note that the times I've given don't take into account how long it takes to heat the water. If we account for that, a French press can get up to 10 minutes and an Aeropress to 5 minutes.

It might not be very long for some people, but again it really matter what you need your coffee for. If you're in a rush you'll obviously want to go with the quicker method. 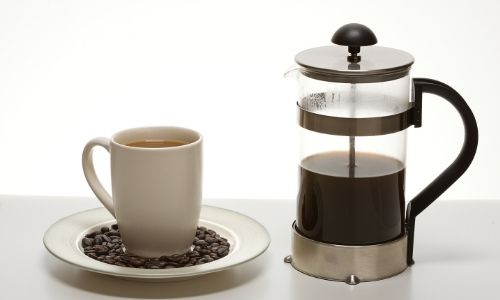 So which brewing method is best for you ?

Aeropress is the choice for you, if:

The original Aeropress, and it comes in a 3 cup capacity. Brewing 3 actual cups is not going to be easy, so I recommend you brew 2 cups and then another one.

You can find the listing on Amazon for it right here.

This version comes without filters, but those are very easy to find online as well. If you don't feel like looking for them, here's a double set (700 count).

On the other hand, a French press might be better suited to your needs if:

This French press will brew you the best coffee

I recommend the French press KONA makes. It's a large version - 34 oz/1 whole liter. So you're going to have coffee for a whoel day if you brew the whole thing.

You can find the listing for it on Amazon right here.

Easy to take apart, easy to put back together, and easy to clean. I mentioned you need a good, safe French press that's going to be in a protective casing.

This one's in a sturdy plastic casing so it's going to hold up pretty well.

The best brewing method is going to differ from person to person, according to what they're looking for.

If you're after a flavorful cup of coffee and don't mind waiting a few extra minutes for it, then I really recommend the French press. The body and coffee oils really add depth and intensity to the coffee.

But if you're going for a smaller cup, a little more intense and an entirely different flavor profile then I recommend the Aeropress.

They both have their pros and cons, so I suggest you actually try out a cup of coffee brewed with each of these methods so you can really get to compare them.

« 5 Easy Steps To Cold Brew Coffee In A French Press
Earl Grey With Milk ? Here's How To Make It (No Curdling) »