Are you a big fan of ginger tea, and want to know if it'd keep you up at night ?

Ginger and caffeine don't really mix, but there are some effects of drinking ginger root tea that might make it very similar to drinking something with caffeine.

So let's talk about whether ginger tea does, in fact, have any caffeine in it. 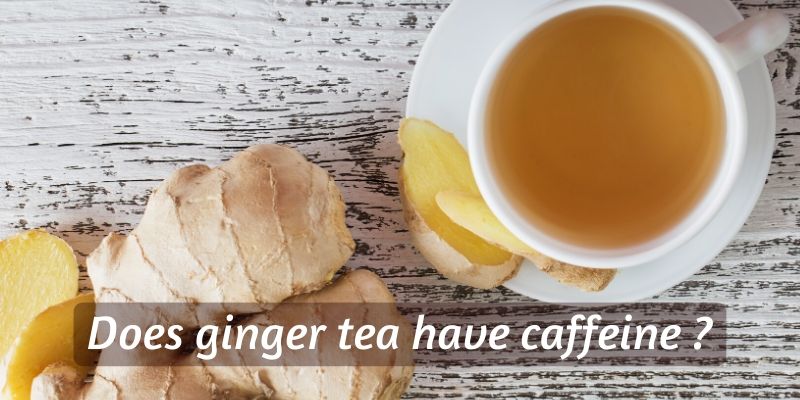 So does ginger tea have caffeine ?

Ginger has no caffeine in it, at all. It's a herbal tea, and these teas don't have caffeine - except for yerba mate, but that's the only exception.

Ginger tea has no caffeine, but it might influence your intestines and digestion like caffeine does for some folks. This is because ginger tea has gingerol, which aids digestion and may trigger bowel movements.

There's a spicy quality to ginger root tea that might make it seem like it's a sort of stimulant. There's also the fact that some folks are so sensitive to spicy foods/drinks, they start to sweat and get heart palpitations, which are common effects of having too much caffeine.

So in short, it's easy to see why ginger could have caffeine, at least from one point of view.

As it turns out though, there is no caffeine in ginger tea. The main culprit behind the spicy flavor of ginger, and that amazing smell when brewed is actually gingerol - literally ginger oil.

If you've ever chopped fresh ginger, you've noticed a clear liquid coating the knife and the parts of the ginger you cut. That was it, gingerol.

I recommend you use fresh ginger root

Precisely because gingerol is responsible for much of the flavor and effects of ginger tea, I recommend you get your hands on actual fresh ginger.

The difference between using dried ginger and fresh is the flavor, and the amount of gingerol they contain.

Dried ginger has a little less than fresh, but it keeps much better than fresh ginger. As in, for months and possibly years.

That being said, I've kept fresh ginger for 3 weeks (it was a big piece), on the kitchen counter. It was fine, and spicy to the last finger.

There's the whole element of peeling and cutting it up whenever you want some ginger tea, which does get annoying, I admit. But overall I think it's really worth it, using fresh ginger over dried.

You can find fresh ginger in literally any grocery shop, at the fresh produce section. All you need for a cup (about 8 oz/236 ml) of tea is one 1 inch piece of ginger.

You'll notice the pieces are much larger than that. No worries, you can buy it as-is, and at home only cut off as much as you need for each cup of tea. This way you'll have fresh ginger tea every day.

Of course, you can use dried ginger if you like. The result will be very similar to using fresh ginger, only the flavor will be a little muted and you'll need to give it 10-15 minutes to fully re-hydrate and release all its nutrients. 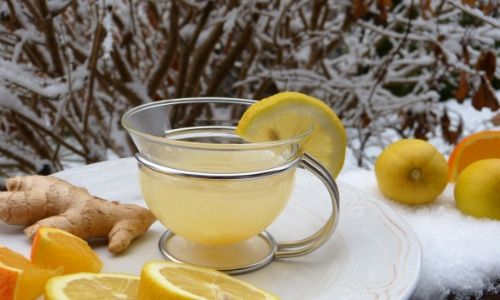 Other effects of ginger you should know about

So, you know about ginger and how it doesn't have any caffeine. This actually goes into several places, actually, and I think you should know about the other effects of ginger that make it such a great tea.

Most of the time you'll find ginger in herbal tea meant to help with one ailment or another. Here's why.

Ginger tea won't keep you up at night

As ginger has no caffeine, there's nothing in it to keep you up at night.

Thus, you might even find it in bedtime teas, since it can actually help you fall asleep. This is because gingerol acts on the stomach muscles, and helps soothe stomach aches, gas, cramping, and general intestinal discomfort (1).

If you're trying to fall asleep and have a full belly, you won't really be able to do so because of your stomach. But, a little ginger tea before bed - or anytime after eating your last meal - can help settle the stomach.

In the case of bedtime teas, you'll notice ginger isn't the main ingredient. It's mostly added as a flavoring agent, so there won't be a whole lot of it if this is a flavor you don't really like.

Gingerol helps the stomach settle, aids digestion (1) and generally makes our life easier after eating food. It does so by helping the stomach itself empty faster, and speeds digestion.

An empty stomach is one that won't give you bloating or too much trouble, so if you know you're going to have a particularly big or heavy meal, try drinking ginger tea right after.

I suggest making it with fresh ginger, and extra-strong. It might be a little spicy, but you can always water it down if you need to. 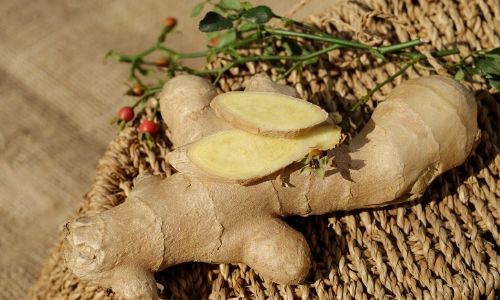 Another important point ginger helps with, and one many people struggle with.

Constipation plagues millions of people across the world, either from sitting down too much, eating the wrong foods, a disability or health issue, or just a bout of constipation from time to time.

Statistically, women are the most likely to have chronic constipation. It's no fun for anyone, and some turn to coffee for relief.

And while coffee does, in fact, help you poop, it also brings along caffeine. If you're trying to go to bed early or just keep your caffeine level down, you can't reach for an espresso every time you need the bathroom.

This is where ginger comes in. I can vouch for fresh ginger tea, but in my experience commercial teas that mention ginger as a ingredient don't have this effect.

So, at least fresh ginger tea will help most people poop. There, I said it and now you know it.

A caffeine-free alternative to coffee that's going to make going to the bathroom each day actually doable.

But how does ginger do this ?

Again, the 'gastric emptying' often mentioned in official research. For some reason, ginger works on the stomach and bowels in such as way as to make transit so much faster.

It's safe to drink ginger tea before bed. There is no caffeine in it, and it's definitely not going to keep you up at night.

The most it can do is make you poop, which is always welcome if you're feeling a little backed up. And taking care of business before bed is actually recommended, so there is no discomfort during your sleep time.

Of course, you should note that there is such a thing as too much ginger. The threshold varies for each person, but side effects include heartburn, belching, stomach pain (possibly sharp) and generally feeling like you ate something too spicy.

In which case, try and eat something plain, drink water and wait for it to pass.

1. Ginger in gastrointestinal disorders: A systematic review of clinical trials