Green tea and yerba mate have been at loggerheads for years now. If you're looking to pick one of them as your next favorite tea, you may need a little help deciding.

So let's go ahead and compare the two, see which ends up being better for you. We'll also talk about a couple of similarities between green tea and yerba mate, to get a clearer picture. 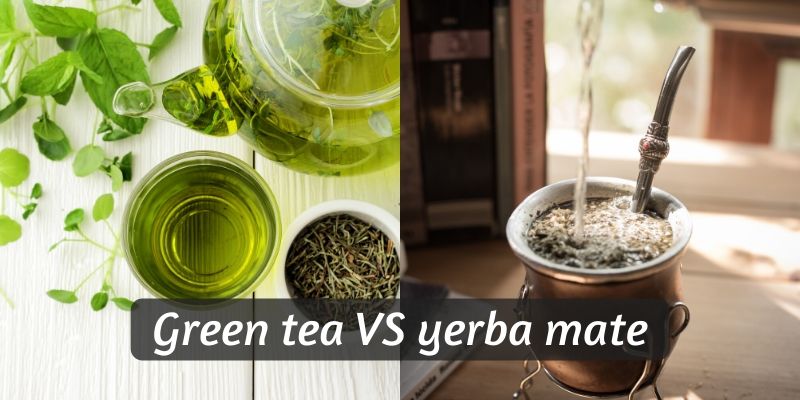 The main differences between green tea and yerba mate are the flavor, and how they're brewed.

Where green tea has a mild, green, astringent flavor yerba mate has a strong, grassy flavor.

Green tea is brewed for 2 minutes, while yerba mate is continuously brewed in special gourds.

The health benefits of both teas are different, due to yerba mate containing more chlorogenic acid and no catechins.

All these differences are more are discussed in the rest of this article, so keep reading to understand all of them.

1. Green tea and yerba mate are made from different plants

If you're a stickler for labels, or place a lot of value on the plant the tea is made from, here's the scoop.

Green tea is made from the Camellia sinensis plant. This is the original tea plant, the one all true teas are made from, such as black tea, white tea, Oolong, and Pu'erh.

This is a plant native to Asia, and it's grown extensively across China, Japan, Taiwan, and India.

Yerba mate is made from a different plant, which is native to the South American continent. The name is Ilex paraguariensis , and it's a type of holly plant. This means that yerba mate ends up being a herbal tea.

It's a drink that's very popular in Paraguay, Uruguay and Argentina, as well as parts of Brazil.

The fact that they're made from different plants is going to matter a lot, since this will influence the final flavor of the tea, the health benefits, as well as the caffeine content.

So a lot rides on what each tea is made from.

2. Yerba mate is less known, and harder to get a hold of

Let's talk a bit about how easy it actually is to get a hold of yerba mate. If you're not from the South American continent, chances are it's going to be hard.

Yerba mate is not very much exported. I mean, it is, but not as much as green tea so you might have to look for it in specialty shops.

If you're from the U.S. then it might be easier, since there's a large community of mate lovers and there seems to be a thriving import of mate.

But good luck if you're from anywhere else. Your best chance is to get yerba mate online, and have it shipped to your place. Some companies might not ship outside of the Americas, and those that do often have a very high transport fee.

All in all, you're better off taking an actual trip to one of the original countries that has yerba mate - Argentina, Uruguay, Paraguay and Brasil - and get your fill there.

It can be a very relaxing and fun trip, and there's definitely a lot to see around there.

Of course, you're also going to find some counterfeit versions but most of the time green tea is easy to find. And if you're looking for high-quality green tea that's going to be easy enough to find as well.

Nearly any tea hour or shop on the planet carries high end green tea, and you'll very quickly find what you're looking for.

This is also reflected in the price tag. Where green tea is easy to come by and thus can be reasonably priced yerba mate is imported stuff and might often be overpriced.

Or, if ordering online, you might just have no choice but to get 2 pound bags since you'll hardly find smaller packages.

But if you end up being a yerba mate lover, then all the better for you ! 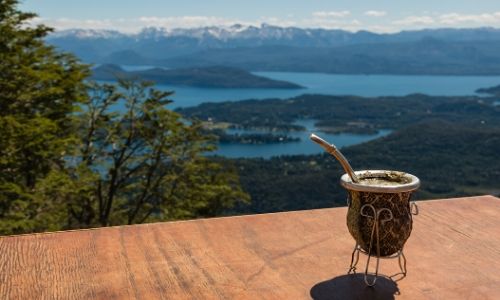 3. Both teas have different types of antioxidants

Another thing to keep in mind when choosing which tea to get for yourself, know that these teas are made differently.

Both teas are high in antioxidants, but they're different.

Green tea has EGCG, or epigallocatechin gallate. That's the wonderful compound responsible for nearly all the health benefits of green tea, from inhibiting cancerous growths to lowering blood sugar, lowering insulin resistance, and so on.

This is a compound only found in the Camellia sinensis plant, and is found in high concentration in green tea and Matcha, which is the more intense, pure version of green tea.

Yerba mate has a different antioxidant. It's actually very similar to coffee, and its caffeine levels are pretty high.

What's more it looks like yerba mate has a slightly higher antioxidant count than green tea, and this could be a criteria to base your decision on.

4. Yerba mate seems to have more caffeine than green tea

It looks like yeba mate might win this round. When it comes to caffeine it's no secret that green tea isn't the best, or strongest.

But yerba mate seems to have a lot more caffeine than green tea, even going past black tea and getting close to a shot of espresso !

The average  caffeine count for a cup of yerba mate is at about 86 mg caffeine, while a shot of espresso is somewhere around 63 mg  of caffeine !

Do keep in mind that we're comparing 8 oz of yerba mate with 1 oz of espresso. It's not a fair comparison.

High in caffeine, bitter like coffee, and refreshing to sip on literally all day long.

5. Green tea is more palatable, easier to get used to

If taste is more your thing, then you're going to find that both yerba mate and green tea are a bit harder to get used to. Neither of them ahs an immediately pleasant flavor, and you really need some time to adjust.

Even so, green tea (if brewed right) can be more palatable and easier to drink than yerba mate.

Green tea has an astringent tone, with a definitely 'green' flavor, a vegetal tone that may remind you of zucchini, or green grapes in some cases.

Mate has a very earthy, vegetal flavor that borders on too bitter for many folks. It's definitely something you're meant to get used to, not immediately embrace.

Another point is that green tea often comes in a variety of flavors. I mean green tea with fruits, flower petals, green tea mixed with herbal teas, and so on.

Probably the most famous combination is green tea with jasmine. The jasmine flowers manage to make even cheap green tea taste better, and often not need any sugar.

Yerba mate is plain, and is meant to be consumed as-is, with no additional flavor. There are accounts of people swapping water for fresh lemonade in the summer.

So if flavor is often a problem for you and you find you need a tea that can be sweetened or won't taste too harsh, you might be better off with green tea. 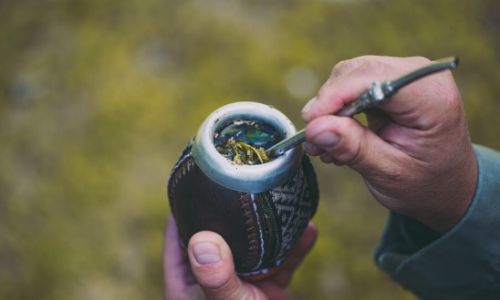 Alright, now you know the main differences between green tea and yerba mate. These are the most important ones when looking to pick between the two teas.

But there are some similarities between them, if you're still on the fence about it. Maybe these point will help.

Both yerba mate and green tea are good morning teas

If your primary concern is to get a tea with a good level of caffeine, or you're sick of the taste of coffee (happened to me on occasion) then switching to either yerba mate or green tea will get you roughly the same result.

Both are great as a morning tea, and can be had as an afternoon pick-me-up if you need it. There is the slight bitterness and vegetal tone in both of them that's going to wake you up, and you're definitely going to feel the caffeine.

Although with green tea it'll be a more subtle release of caffeine, since it will pair with L-theanine and act in a gentler way on your body.

That being said, bot teas are alright in the morning.

If you want to have the best of both worlds, you can try brewing them together. Some tea companies might sell a blend of green tea with yerba mate, but mostly you'll find them separately.

If found separately, know that you'll have to brew the mate first for a couple of minutes, and then add the green tea leaves for another 2 minutes.

Neither tea goes well with milk

If you're looking to find a tea that's going to pair well with milk, then you should know that neither green tea nor yerba mate should be in contact with milk.

Both of them have too sharp a taste, are too 'green' and vegetal to really take well to milk. At least not to animal milk.

If you're ever going to use a plant or nut milk, then it might be acceptable.

For example a cup of green tea with almond milk might be a very good combination for some folks, while others wouldn't come near it. Others might prefer coconut milk, or cashew milk, or rice milk.

Play around with it, see if your cup of green tea or mate takes well to any plant milk. I've never tried it personally, but I'm sure someone in this world has, and can tell you about it.

Both green tea and yerba mate are treated as a sort of health drink, and you're bound to find them in one shop or another.

While yerba mate might be harder to find in its loose leaf form, you may find it in the form of energy drinks, or other teas that are also infused with mate.

If I were to pick a favorite, I'd say green tea since it comes in so many varieties of flavor and has a gentler caffeine kick.

Whichever you choose, I hope this post made the decision easier for you.