You've probably heard about high altitude coffee, possibly from someone claiming that it's THE best coffee. Ever.

But is that really so ? Is high altitude coffee so great ?

Well, yes, it is. And it has everything to do with how many feet/meters above sea levels it grew. Even roasting at a higher elevation makes it better. So let's see those reasons. 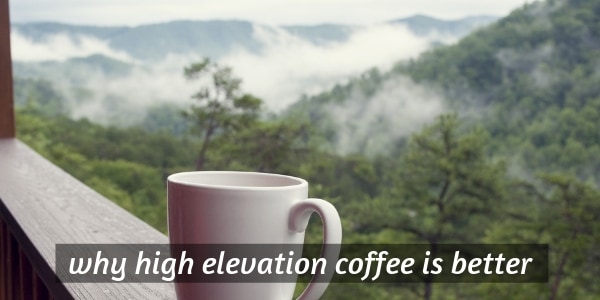 Okay, now we know that fruity and sweet is something that many people enjoy in their cup of coffee. Not everybody maybe, but a whole lot of people. Enough to make high altitude coffee famous.

But why does it turn out like this ? And does this mean that lower altitude coffee is somehow less good ?

First, we need to agree on the fact that the more go climb above sea level, the less air pressure there is. The less air there is, in a way. Less oxygen to weigh everything down.

Humans don't really do well in low air pressure environments. Plants don't seem to have this problem, though they're slowed down a bit.

So the coffee fruit (coffee cherry) takes more time to ripen. Or, you could say it takes just as much time as it needs.

900 m to 760 is going to be much milder in taste, not as sweet, and have a earthier taste. Anything below this is going to be disappointing, with a few exceptions I'll mention later.

High elevation results in a better development of the flavors inside the cherry, and the complex sugars that give the coffee beans their sweetness are going to shine through.

This means a cup of black coffee made with high altitude beans will be amazing.

It's much like simmering a pot of delicious stew for several hours on low heat. The food is done, yes, but the flavors need some more time to mingle and develop.

There, now you're thinking of coffee stew.

And yes, this means that lower altitude coffees tend to taste more earthy, and bland. This is partly because of the air pressure, and also because of the terrain on which the coffee grows. More on that later.

For now, here's a (hopefully) clear diagram of how high altitude influences coffee. 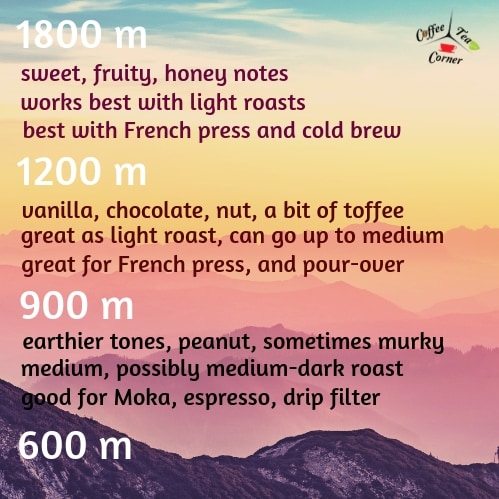 Growing coffee on the side of a mountain is hard work. Planting it, caring for the plants, tending to their needs, harvesting the cherries and processing and finally shipping them.

There need to be dedicated people and machines in order for all this to work.

It's often not easy for machines to get up the slopes, and for example picking the coffee cherries is done by hand. As is sorting the green coffee beans, and picking out any odd ones.

This makes the process take longer, yes, but ensures quality and it's often the only way to do things in some places. Jamaica Blue Mountain coffee is one such coffee.

Now let's talk about the fact that most people plant Arabica, and that's a fairly sensitive plant. If it gets any kind of pests, it will easily yield a poor crop.

This means that pest control is a big thins on those farms. And even the surrounding area beyond the farms is often controlled, for quality's sake.

Given the fact that most of the coffee grown at high altitudes is Arabica, it doesn't give many beans to begin with. Arabica gives about half the amount of beans that Robusta does, and this means they end up being more expensive.

All these things combined, along with the quality and taste of the final brew make high altitude coffee an expensive drink.

So the next time you're in the supermarket and grab a bag of coffee that says the coffee was grown at a high altitude (and specifies it), you'll know some people made efforts to make and bring it to you.

Ah, the most important point. why does it matter that it's a mountain are ? Why not a hill, some 1500 m above sea level ?

Well, the fact that it's a mountain area matters specifically because of the steepness of the mountain.

A hill is a hill, unless we're talking about some very steep hills that can manage a 70 degree angle and still be called hills.

There probably are a few in this world, and they've probably already got coffee plants on them.

But why does inclination matter ? Because it allows the rain water to drain, and not pool around the coffee plants. Coffee is very sensitive to water, which means that if it takes too much water it will become a muddy, bland coffee bean.

This is why flat-land coffee tastes so blah.

So if your coffee cherry doesn't take more water than it needs, it means it can develop its flavors much better, and result in a sweeter, fruitier bean.

There is also the fact that the mountain areas often have clouds coming to and fro.

Coffee does need sunshine, but it's more the pure morning sunshine it needs. Then, when the weather changes and becomes cloudy, or switches between cloudy and sunny often, the coffee has a chance to cool off.

It doesn't get more sunshine than it needs, which means it won't be scorched.

Along with this comes the fact that temperatures are usually lower in mountain areas. Even in subtropical regions, the wind blows and cools the mountains to a bearable temperature. This doesn't always reach the hills or flats, and results in droughts and heatwaves.

So here it is: mountains offer steep surfaces to drain the excess water, sufficient cloud cover, and a cooler temperature. Don't forget about temperature there, because it's almost more important than the altitude. 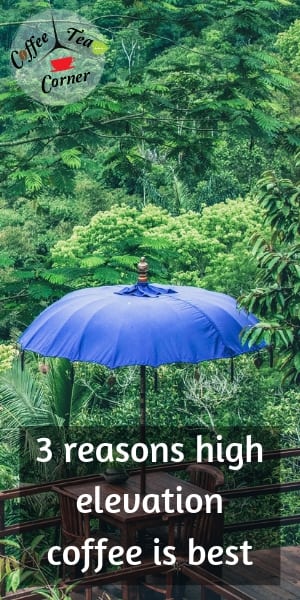 Conclusion: elevation matters, but so does temeperature

So those were the 3 main reasons high altitude coffee is better. The growing conditions are better, and result in a sweeter, more concentrated coffee bean. It's labor intensive, and worth every penny.

High altitude coffee comes from the mountainside most of the time, and this means it's going to be from a cooler place of this Earth. Cool enough for the coffee bean to grow, but grow slowly so it gets that gorgeous flavor.

The thinness of the air at high elevations also helps with this, though it's not necessarily THE key. Think of it like:

Of course, proper coffee plant care needs more than that, like the quality of the soil it gets and how much people tend to it.

If you're content with that explanation, then great. But there are a few things I need to add to these reasons, to better explain why this coffee is so great. Read on to find those out as well.

The latitude your coffee comes from matters

Alright, we've agreed that high altitude coffee is simply better, and it needs a mountain to grow on. Yea, and also no.

As in, the steep terrain offered by the mountain is mandatory. But if you were to find a hill, also steep, and very high above sea level, would it be alright ?

Yes, it would be. This is because 1500 m at the Equator are going to be cooler than flat lands at the Equator. But they're warmer than 1500 m at 30 degrees latitude, like most of the U.S. and southern Europe.

The Equator, which is the hottest area, is at 0 latitude. And everywhere else is cooler.

This means that if you were to look at the famous Kona coffee, you'll be surprised it's just 600 m above sea level. It's on the side of the mountain, yes, but in a warmer climate and makes the whole point of the high altitude coffee kind of odd.

Hawaii's just above 15 degrees latitude. This means that any mountain or high elevations it has are going to be warmer than the Rocky Mountains or the Everest, by default.

So in essence, what Kona has is the ideal temperature, sunshine-to-overcast ratio, and excellent drainage.

Even if the air pressure is not very low there, the coffee cherries still grow slower because of the lower temperature. This still results in a sweet, fruity coffee that many people enjoy and would very much like to have on their kitchen counter.

What about roasting the coffee at higher altitudes, would that impact the final taste ? As you've read from the subtitle, yes. High altitude roasting can result in lower temperatures used for roasting.

This means that the beans don't have to spend as much time in the roaster, and the roaster can be on a very low setting.

The reason is again, the air pressure. Low air pressure means heat 'forms' faster, as in boiling water or heating something up. It gets to the desired state faster, and you don't need to use as much heat, or for as long.

So your light roast coffee will come out light, but with less heat used. The taste will be great, especially if you're using a high altitude coffee to begin with.

I hope I helped make things clear for you. Elevation does matter, but we should also take into account temperature and where exactly on the Earth the coffee was grown.

You can always download that diagram on your phone, and study it better.

« French Press VS Espresso - 7 Differences In Taste And Brewing
Can You Really Make Tea With Cold Water ? (Cold Brewing Tea) »