Home » Coffee Facts » Is Coffee A Fruit ? The Surprising Truth About Your Morning Cup

You know those facts that turn your world upside down ? Like a barcode scanner scans the white lines, but not the black ones ?

What if coffee turned out to be a fruit ? Is coffee a fruit, actually ? I never gave it much thought until we had a debate on whether chocolate is a salad or not. Seeing as it comes from a tree, which makes fruits, and the seeds are the cocoa we know.

Is this the same with coffee ? Where does it even come from ? Let me explain. 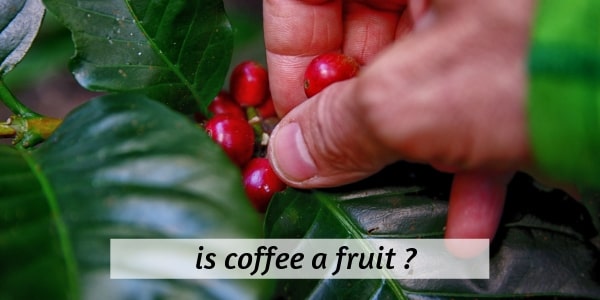 So is coffee a fruit ?

Yes, actually it turns out that coffee is a fruit. The coffee beans we know and love are actually the pits of a fruit. That fruits looks a whole lot like a cherry, and is actually called a coffee cherry.

The coffee beans take up the majority of the space inside such a fruit, so there isn't much pulp to eat if you're ever curious. It is edible, though. More on that later.

For now let's see how coffee goes from sweet, red fruit to dark, nearly black bitter drink in your cup.

How coffee goes from fruit to drink (short version)

Ever wondered why some coffee types have a fruity tone to them ? Or maybe you've heard of coffee that tastes quite a bit like berries, specifically a Ethiopian sort that tastes much like blueberries.

Well, let's see how things like that happen in the first place. So let's start with the coffee bean itself. You know what it looks like, all dark brown and shiny and smelling great.

If it's not roasted, it remains green. Plant it on sloping terrain in tropical and subtropical areas, with plenty of sunshine and consistent rains, at about 1.2 km (0.74 miles above sea level) and give it a few years.

It will produce beautiful white, fragrant flowers and after a while the cherries will form. This can become too much for the coffee tree. As in, often too many cherries end up growing on the branches.

The more cherries the tree has to successfully grow, the more resources it needs, and the chances of your coffee tasting weak are very high. So they need constant pruning.

After the berries have turned from green to bright deep red, they are then picked and sent to process. There, the fruit is either dried out or beaten/washed off the beans (pits, actually).

After the beans have been removed from the cherries, they are green and somewhat soft. There's almost always 2 beans inside the cherries.

Then they're roasted to various degrees, according to each coffee company's requirements. A lighter roast keeps the original flavors of the coffee, a darker roast burns them but gives the coffee a deep flavor.

After the coffee has been roasted, it's then either packaged and sent out to the market, or ground up and then packaged and sold as ground coffee.

This is the very short version, and there are some additional details that can change the flavor profile of your cup of coffee. Still, this is the bare bones version, and how you coffee goes from an actual fruit to a glass of iced latte (or your preferred drink).

From the moment they've been roasted, to the moment you enjoy them, no more than 3-4 weeks should pass. They're still good past that date, but they start to lose flavor after a while.

The caffeine in your coffee, whether beaned, ground, or brewed will always be the same amount. Even after it loses its aroma. 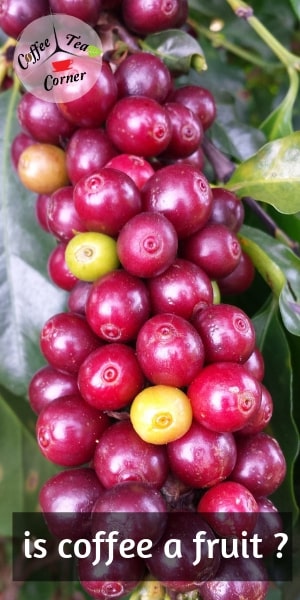 Peaberries are a sort of premium coffee beans

Peaberries are coffee beans that have grown without their twin, you could say. While the coffee cherry has usually two seeds (beans), in some cases there is only one.

So, this means that the same will be different. Usually you coffee bean will be oval, and flat on one side. That's the side where the other half was.

But with peaberries, there is only one single coffee bean, and it's a round one.

It's believed to be more flavorful and sweeter than a regular coffee bean. As such, these beans are singled out and set aside for premium coffees.

So if coffee is a fruit, does it take on a fruity taste too ? Remember I touched on that a few lines ago. Let's see what 'fruity coffee' is all about.

When I explained how coffee goes from fruit to drink, I mentioned it can be processed two ways.

It seems that the traditional method produces reliably sweeter and fruitier coffees. This means that after the cherries are picked, they are left out in the sun to dry up.

If the cherries are very ripe and juicy, they will ferment well enough so that the natural sugars can give the beans a sweeter aroma. This will also impart on the beans the aroma of the cherries themselves.

At the end of the drying process the coffee beans are removed from their dried cherries, which are mostly skins at this point. The dried skins are then used as fertilizer for the coffee plant, or in a special tea. More on that near the end of this article.

What about coffee that's not been processed in the traditional way ? That coffee too can have a fruity aroma, though it won't be as pronounced. This is because the non-traditional method involves beating the beans out of the cherries, and washing the pulp away.

So not much fermenting is going on. But, this kind of method gives you a 'cleaner' coffee flavor, in a way. As in just the coffee bean itself, as it was meant to be.

Finally, it all depends on what kind of coffee you're using. As in a very fruity type of coffee, which was grown for the sole purpose of giving a fruity flavor, is still going to taste fruity even if the cherries are not sun-dried.

A very bitter, strong kind of coffee like most Robusta subtypes will have a faint fruity aroma at best. Even if they're sun-dried, because Robusta simply has much less sugar than Arabica beans.

If you're wondering what else can change the taste of your coffee beans (aside from their processing), you should definitely read up here on how volcanic coffee is actually the most flavorful.

Coffee has its health benefits too, much like fruits

You know coffee is full of antioxidants, it's been all over the internet these past few years. And it's true, black coffee really does provide you with a whole lot of antioxidants that help your circulation and stave off a few ailments.

There's more to it than that, though. The best antioxidants and vitamins are found in fruits, like pineapple and blueberries and goji berries and so on.

But coffee is a great way to pile on the health benefits, if you do it well. Aim for light roasted coffee, and stay away from sugar and cream.

I mean that yes, coffee does raise your blood pressure if you need it raised. It keeps your mind alert and fresh. The caffeine from coffee acts as a sudden kick, rather than a slow-releasing energy like the caffeine in black tea.

Notice I said black coffee. This means that adding sugar and milk or cream will counteract the health benefits of your coffee. The caffeine will still work its magic but the antioxidants will have a hard time getting past the milk and sugar.

So for the best effects, try and stick to black coffee if you're in it for the health benefits.

The most antioxidants and vitamins are actually in the fruit of the coffee itself. This means that the coffee cherry is going to give you much more of a health kick than the coffee bean itself.

However, seeing as coffee cherries aren't part of your cup of coffee, you can't really get around to them very easily.

In the countries that grow coffee for export like Central and South America, large parts of Asia, and a good part of Africa, these cherries are available for consumption.

I for one have't been to a coffee farm to try a coffee cherry just yet, but others have. Their accounts vary, some arguing that the cherries themselves are sweet, others saying they're definitely flavorful but resemble many berries all at once.

Everyone agrees though that it's an experience worth every coffee lover's time, if they're near a coffee farm and they are allowed to sample the cherries.

In some places of the world, especially Latin America the dried coffee cherry skins are gathered and used as a drink. They make a tea with them, and that's the closest you can get to tasting the coffee cherries themselves.

The tea is named cascara, and you will have to look for it quite a bit if you want to have a taste of the stuff.

As for what the coffee cherries look like, there are several answers. The cherries themselves vary according to the type of coffee.

For example Bourbon (a type of Arabica coffee) grows as a reddish cherry. Its sister the Yellow Bourbon grows as a yellow cherry, and of course there is an Orange Bourbon variety.

Some cherries grow purple or pinkish, but in the beginning they all start out as bright, unripe green.

They don't grow as two cherries on long stems, but rather in close bunches flush against the branches.

If you're ever in the middle of a debate, you can always pull out this as a trump card. After all, if coffee is a fruit and you add coconut milk to your coffee then don't you have a fruit smoothie of sorts ?

Coffee really does have a long journey from the moment it is a green bean put in the soil, until it becomes your morning cup. But it's great to know just how your coffee came to be on your kitchen counter.