Cinnamon is a great way to spice up your usual cup of coffee. But, dissolving grounds cinnamon into your coffee is one hell of a task, and you might just fail anyway. Not your fault, it's just the way cinnamon works. Let me explain. 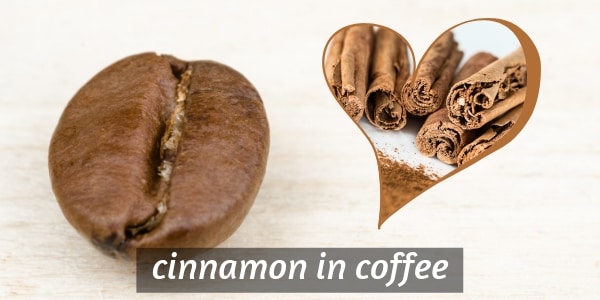 So can you dissolve cinnamon in coffee ?

You cannot dissolve cinnamon in coffee, since it is an insoluble fiber and will not melt. But you can steep the cinnamon with the coffee grounds, and still obtain the cinnamon flavor, without the slimy sludge.

Do not add ground cinnamon to any brewing method that uses pressure and gravity, like espresso or drip filter or Moka pots. You can instead add a whole stick of cinnamon to your already brewed coffee to add flavor.

But let's see how you can still add some cinnamon to your coffee, seeing as we can't really dissolve the spice.

When you make your coffee, you should always  know just how much time and water it takes for your brew to be ready. This way you can figure out if you can add anything to the coffee grounds.

For example adding ground cinnamon to your espresso in the coffee cup will be a mistake, much like it would be with cocoa. This is because the cinnamon will expand and take up much of the water, leaving it not much room to go through your ground coffee.

This means your espresso machine will back up and you'll have an unreasonable amount of sludge to clean up.

Adding cinnamon to the coffee grounds only works with a filter coffee, or with a French press, and I guess even a Turkish style coffee, if you're willing to strain it before serving.

You'd have to strain it because cinnamon absorbs water and become a stingy, slimy substance when in contact with water, and if you've got a coffee that hasn't been filtered, it looks worse.

The tiny bits of coffee dust that end up at the bottom of you coffee cup if you're using a Turkish pot or French press will stick to the cinnamon, making it look even worse.

The problem with a Moka/percolator is that the sludge won't let the water pass through as it should, so you will end up with a backed up machine.

If you've got a filter, French press, or Turkish pot then ground cinnamon can be added before brewing, Everyone else will have 2 other alternatives, so don't worry. 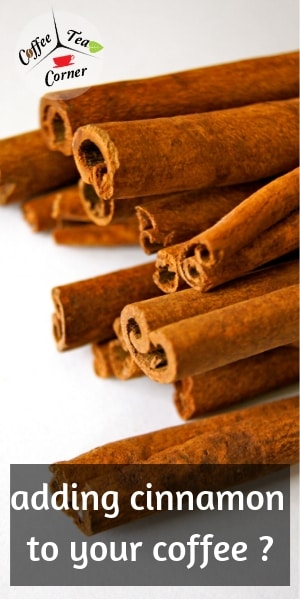 2. Add cinnamon powder to your cream, before adding it to the coffee

Another alternative, if you can't add ground cinnamon to your ground coffee is to mix in the ground cinnamon with your cream before adding it to your coffee. This will make it mix in with the coffee better, since it won't all float at the top.

This works best with creamers on the heavier end of the spectrum, since the fats will bind the cinnamon grounds to them.

You can try this with skimmed creamers, but I'm not sure how well it would work.

Another option is to sprinkle the ground cinnamon directly into the whipped cream, before you whip it. This way when you serve the drink with whipped cream, you won't have cinnamon just on the top, but all throughout the cream.

Completely up to you how crazy you want to go with the cinnamon.

Do keep in mind that if you use this alternative, your coffee will no longer be a black coffee. If you want to keep it black then you're either left with mixing ground cinnamon directly into your coffee, or using this third option.

3. Keep a few cinnamon sticks with your coffee beans (or grounds)

Finally, and this is the last option I could think of, you can keep some cinnamon sticks with your coffee beans. As you know, coffee absorbs smells, which means it will absorb the aroma of the cinnamon sticks.

That being said, you would need quite a few sticks, depending on how much coffee you have, and how strong you want the aroma. Of course, the longer you keep the sticks in, the stronger the aroma.

You can even do this with vanilla beans, I suppose.

When you end up grinding the coffee beans, you will end up with cinnamon-infused coffee. Some beans may take the aroma faster, some might not. It's up to you to play around with the proportions and how long you keep the cinnamon sticks in before you first grind the beans.

The main problem with cinnamon is that it's actually a type of bark. It's literally the bark of a certain special tree in Asia.

So it has no way of actually dissolving, like for example sugar crystals or salt crystals.

The crystals are made of completely different compounds, and they contain absolutely no fibers whatsoever. Whereas cinnamon, whether ground or sticks, are made up of just fibers. Imagine trying to dissolve some twigs.

Now, there is a difference between ground and stick cinnamon. Much like with coffee beans, the cinnamon sticks preserve the flavor better. This means that pre-ground cinnamon (like coffee) is going to lose its flavor much quicker than the full, stick form.

Also where you keep your cinnamon is key in how much aroma it retains. Again, as with coffee beans, a dry, cool, dark place is the perfect storage for cinnamon. Airtight, if you can.

When you do add ground cinnamon to your drinks or foods, you won't really feel the texture since it's pretty finely ground. But it's not dissolving into your food or drink. If you were to grind it in a larger size (as in, not powder) you'd notice it right away at the bottom of your cup.

I hope I managed to help you out here, I know cinnamon is a favorite spice to brighten many drinks or foods, but sometimes it's just harder to work with.

If you were to mix in some ground cinnamon with flour before baking cookies then my guess is they would taste delicious. I've tried adding cinnamon to my coffee, back when I was using a Turkish pot.

The coffee dust was clinging to the bits of cinnamon, and I had to spoon it all out. That's one thing a coffee filter will help you out with, even if does produce a different kind of coffee.

Another alternative that could be used to put cinnamon in you coffee would be to use large-sized cinnamon grounds, and put them in a teabag. And then proceed to steep said bag in your cup of coffee.

The only problem is that brewed coffee won't permeate the cinnamon grounds completely. Much like you can't boil rice directly into milk to make a rice pudding. It's just too thick to do what you're asking it to do.

Unless you're willing to add pea-sized cinnamon bits to your coffee cup, and then scoop them out after a few minutes. I'm not completely sure how that would work out.

« Is Green Tea Herbal Tea ? The Difference Between The Two Types
Can You Add Milk To Green Tea ? On Enjoying A Good Cuppa »