Both iced coffee and cold brew coffee seem to be favorites in summer, on the beach , or just wherever there's a bit of sun.

But how are they different ? And is one better than the other ?

If the question's out there, then enough people want to know. This post is meant to compare cold brew coffee with iced coffee, so you can settle the score once and for all. 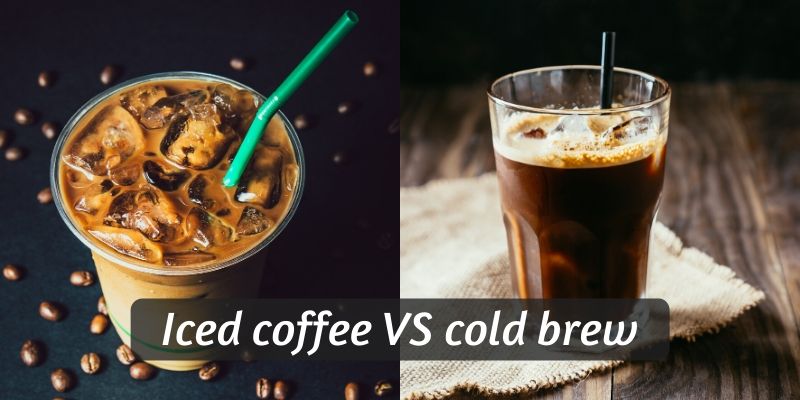 Possibly the most important distinction, and it provides an answer for those of use who are genuinely confused why these two drinks are not the same.

Both end up as a cold drink, and with ice as well. But what's the main difference ?

Iced coffee is simply hot brewed coffee - meaning French press, espresso, drip-filter, pour over, you name it - that has been poured over a whole lot of ice.

Really fancy places replace the ice with coffee ice cubes, so the drink doesn't get too watered down. But that's not something you'll see often.

For this reason, you'll find the coffee brewed for iced coffee is stronger than a regular cup of joe.

Cold brew coffee is made differently. It's brewed in cold water, for several hours - anywhere between 8 to 18 hours. It's a very slow process, so there's always got to be a bit vat of ready-made cold brew in the coffee shop.

This results in a cup of coffee that's going to taste very different from iced coffee, since the entire brewing process is different.

2. Iced coffee may be watered down

Since iced coffee is meant to be poured over several ice cubes, it may at times taste a little watered down.

Now, this may or may not be the case with your particular cup of iced coffee. But it's happened enough times that coffee shops are taking measures to avoid this from happening.

One such measure is to brew the coffee extra strong, so it allows for the water in the iced cubes.

Another method is to use frozen coffee in place of ice cubes. This isn't very common, but it might be something you'll come across.

As for cold brew, the reverse is actually true.

Seeing as this coffee is brewed cold, it rarely needs ice, or as much iced as iced coffee does.

And the way it's brewed makes it a sort of coffee concentrate, which may mean that in some cases you'll see the barista adding plain water to your cold brew to tone it down a little.

The key point here is that often cold brew will be the stronger coffee, both in terms of flavor and in terms of caffeine.

Iced coffee is most often going to be the prettier looking coffee, with toppings and so on. 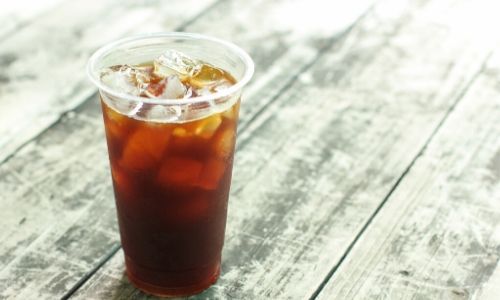 3. Cold brew ends up with a sweeter, milder coffee flavor

When ordering a cold brew coffee you're going to get a different flavor than what you might be used to.

The way cold brew extracts flavor and caffeine from the ground coffee makes it taste less acidic, less bitter, and allows the actual aroma of coffee to shine through.

Now, this results in a lighter tasting coffee. Since there isn't as much bitterness, it might taste lighter than hot coffee and more like a nice cup of Arabica.

But cold brew has the highest concentration of pure flavor you'll find in any brew method, The rest are overshadowed by scalded coffee and a slightly burnt flavor.

This leads people to believe cold brew coffee actually tastes sweeter than any other coffee. The difference is subtle, but it's there. It's the lack of bitter and acidic tones that make it seem sweet.

On the other hand, iced coffee is hot coffee. It will have a bitter, harsh tone to it even after being cooled with ice.

This is one of the reasons it takes so well to flavorings, while cold brew is usually served plain, possibly with a little sweetener.

4. Iced coffee is often flavored and may come with toppings

This is because the strong coffee flavor will still shine through the caramel or strawberry or chocolate syrup, along with whipped cream and so on.

And, if it's made with a hot coffee that's got more body or has a grittier texture - like French press or espresso - it's also going to have a deeper coffee color than other versions, like filter coffee.

If you were to do the same thing with cold brew the coffee flavor would be a little lost, or at least weak.

This is a more delicate, fragrant coffee that doesn't take well to other ingredients trying to outshine it. The whole point of cold brew is to enjoy its own flavor, much like drinking black coffee.

If you're trying to make iced coffee or cold brew at home, then you should know you're going to need specific grind sizes.

If you're making cold brew coffee, know that you'll need coarse ground coffee. It should look like Himalayan salt, in large chunks.

The reason behind this is the speed with which cold brew coffee brews. It takes hours and hours, and the larger the surface area of the ground coffee, the better the flavor apparently.

If you were to use medium or fine ground coffee your cold brew might end up on the bitter end, since coarseness also helps lower acidity and bitterness.

You can find coarse ground coffee pretty easy, though you might have to look for it a little. Or simply grind it at home.

As for iced coffee, you're going to need whatever grind size you usually brew your coffee with.

So if you usually brew espresso, you'll use the same ground coffee as before. The same goes for any other brew type.

Make sure to brew your coffee extra strong, to allow for the ice cubes melting and watering the coffee down a little.

Another point related to this: cold brew might often be a little cloudier than iced coffee. Since cold brew is an unfiltered cup of coffee, you may find traces of coffee dust on the bottom of your coffee.

The iced coffee is usually brewed through a filter of some sort, and this will lead to a 'cleaner' cup of coffee. 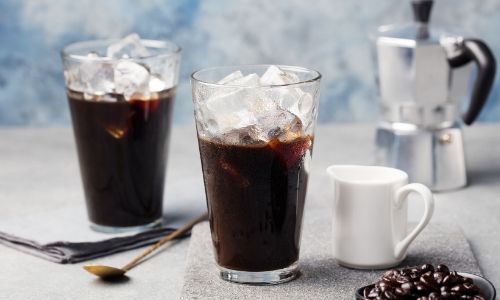 There are of course some common points between iced coffee and cold brew. Some might be immediately obvious, and some might come as a surprise.

The point is that while these two drinks are different, they're also similar and will do great as a summer drink.

1. Both are great ways to cool off summer heat

Both cold brew and iced coffee are actually great for starting the summer season, as a treat on a warm morning.

They're both cold, iced drinks, and they offer different but very good coffee flavors.

While cold brew might be more actual coffee and less ice, you're bound to enjoy it even if you get the unsweetened version.

2. Both can be used as the base for a frappe

As a continuation of these two drinks being great for summer, let's talk about how great they'd go in a frappe.

As you may or may not know, originally the frappe was meant to be made with instant coffee. It provides a strong kick and can hold up to copious amounts of whipped cream and sugar.

But you can also make a frappe with either iced coffee or cold brew. The taste will be different from instant coffee frappe, but I've seen it done before.

Mostly done with iced coffee, and the bartender crushed the ice and shook the coffee with it.

Frappes made with either iced coffee or cold brew usually have a slightly milder tone. They can still be flavored ans sweetened, but they're usually a bit more subtle, and might contain less dairy like milk or cream.

Both cold brew and iced coffee come in a big cup if you want. There might be a slight difference in the amount of actual coffee you get, though.

Cold brew usually has just a few ice cubes, while iced coffee is more than half full with ice.

However seeing as both coffees are served in large cups, the difference doesn't really matter.

So if you're looking for a nice, cold coffee to sip on for half the morning, both will do the job nicely.

I don't see any evidence pointing to cold brew being better than iced coffee, though for some this might be the case.

If you care much for flavor, or if you're the kind of person who likes to taste their coffee and look for notes of this and that in the cup, then I guess cold brew might be better for you.

It's got a clearer aroma, and seems to be a great way to really taste a coffee bean's origin.

Other than that though, there isn't really much reason to say one coffee is better than another.

Whether you end up loving iced coffee or cold brew more after this post, I hope you got the information you were looking for.

Both cold brew and iced coffee are a great way to get your cold coffee fix, and the differences between them maybe helped you figure out which you want this morning.

« Green Tea VS Yerba Mate - 5 Differences To Pick Your Favorite
Espresso VS Lungo VS Ristretto - Know Your Espresso Shots ! »