Chai is one of those delicious teas that stand out in memory and make you come back for more.

One question I've seem debated for ages is whether Chai is black tea, or herbal tea. Or if it's an entirely different tea on its own.

Well, as it turns out the answer is actually simple but not just one, and has some historical implications. And funny enough, none of the answers are wrong. 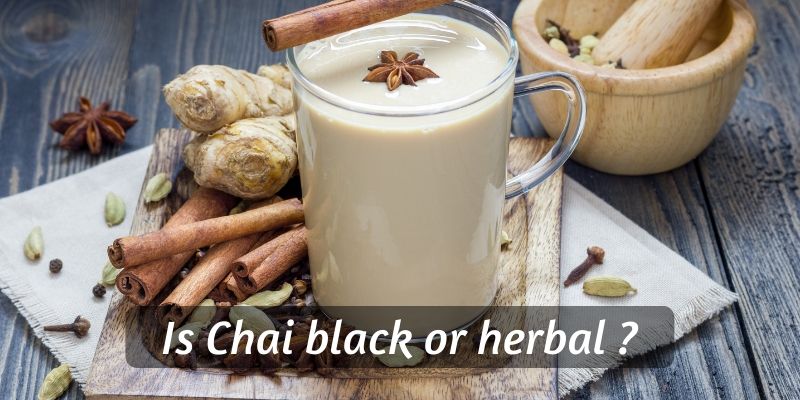 So is Chai black tea or herbal ?

Originally Chai is meant to contain black tea. However it has a significant amount of spices, which kind of turn it into an herbal tea as well.

In truth, the answer is somewhere in between. if you want to look at the base of the tea, it's black tea since that's what is used.

One full teaspoon of black tea leaves, with an equal amount of all the spices. So the black tea outweighs each spice.

That being said, when you drink Chai what you'll first taste is the explosion of spices, not the black tea. So in a way you can also argue it's more of an herbal tea because of this.

Funny thing is, the original, original Chai used to be strictly just spices. Which would make it entirely herbal, so let's discuss that a bit.

Masala Chai itself is said to be derived from Ayurveda

Way back when, as in several centuries ago Indian folklore claims one incarnation of Dhanvantari (Hindu god of Ayurveda) came to Earth as a king and taught several sages medicine.

Over time that knowledge was refined, and Ayurveda still exists today. The spices commonly used in Chai - cardamom, ginger, cinnamon, clove, star anise - are believed to have strong health benefits.

As a matter of fact, those spices do have some health benefits, which have been studied in the past decades. At some point in the past, those specific spices were singled out to be the best combination of health-preserving ingredients.

It was the health remedy for generations, passed down grandmother to grand-daughter for ages.

As such, the original Chai is actually an herbal tea. It wasn't made of any tea that we know of, this wasn't commonplace in the Indian subcontinent.

However this changes when the British East India Company decides to break China's monopoly on tea. More in that in a bit, since it changes the very history of Chai as we know it. 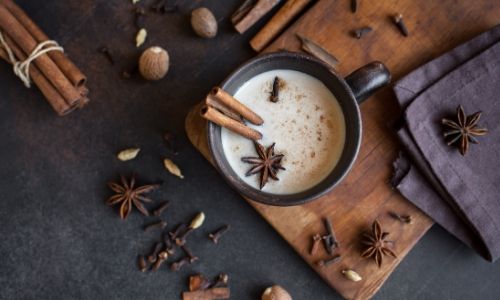 Nowadays though, Chai contains black tea. This is a wonderful combination, since the earthy tones of black tea complement the milk and spices very well.

While you might find variations on the base of the tea (such as green tea, or rooibos), the original is made using black tea.

There isn't a specific kind of black tea used, though it's often a very strong black tea such as Assam for example. Other times, to further complement the spices and milk, a smoked black tea is used.

Some use two kinds of black tea, to create their own personal mix.

Speaking of, you should know that each region in the Indian subcontinent prepares Chai slightly differently. For example in the western part of India cloves and black pepper are not used.

However you'll find black tea used as a base nearly all the time.

Originally black tea was used, thanks to the Brits

Why black tea though ? Since there are variations on the base of Chai, why is black tea used instead of anything else ?

This goes back a few centuries, when the East India Company was roaming the seas. They's brought black tea back from China, and it became a very sought after commodity.

This also meant that China had a monopoly on something they very much needed.

So, as India as under British rule at the time, East India Company offered land in the Assam region to anyone willing to grow tea plantations on their land.

Many accepted, and this is how we got Assam tea, which shortly thereafter became a big export for East India Company.

It also lowered the price of tea considerably, and broke the Chinese monopoly.

As time went on, India started using black tea in its Chai. In the span of a few generations, through a blend of the Ayurvedic properties of milk and the British penchant for adding milk to tea,  the Chai as we know it today was born.

It still is considered more of a health drink than a tasty beverage, often made by the women of the family when someone would fall sick or to help pass the cold season without too much trouble. 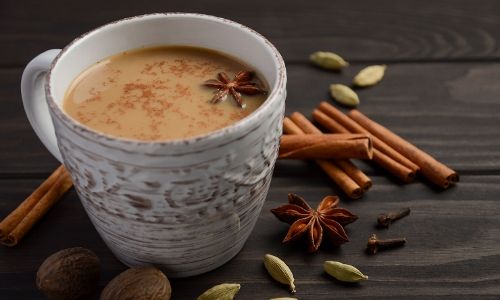 Variations on Chai are possible

For example in the North-West region of India green tea is used instead of black tea, and there are few other ingredients added such as almonds and the tea is sweetened with honey.

Since Chai became a popular drink in the West, several versions have sprung up and are not easy enough to find.

Chai with a green tea base is common, though some spices are removed in most cases, and replaced with others. For example cardamom and clove may be swapped for allspice, and the overall strength of the tea may be a little weaker than regular Chai.

Another variation I've seen, and this one is completely caffeine-free, is rooibos Chai.

If you don't know what rooibos is, it's an herbal tea made from a South African bush. It's a much sweeter, caramel-toned tea since rooibos itself is naturally sweet and mild.

Often this version of Chai is mixed with the warmer, sweeter spices such as cinnamon, nutmeg, and ginger. Also, honey goes particularly well with rooibos Chai, as opposed to other versions. 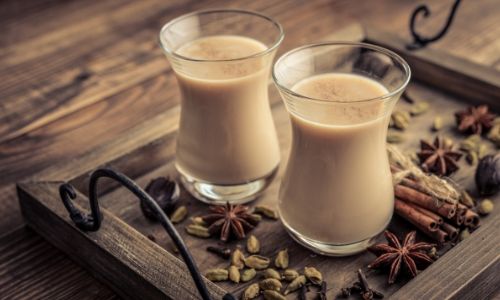 Whichever way you like your Chai, it's not terribly important if it's herbal tea or black. From a historical point of view, it was originally herbal and has in time become a black tea.

That being said, it always ends up delicious, no matter what is used for the base and where it comes from.

Personally, when i first stumbled upon this tea I was unpleasantly shocked. I thought I was buying just black tea, and the cardamom in it took me completely by surprise.

After adding a bit of sugar and some milk however, the whole drink turned around for me and I was very happy with it. The one I have is a mix made with black tea, cardamom, cloves, and cinnamon.

I mostly keep it as an autumn and winter tea, since I think it works great as a pick-me-up when it's already 5 PM and it's dark.