Do you happen to have a nice oolong on your hands, and aren't sure if it's a black or green tea ? Well then, let me help you figure things out, since it's not an easy task.

Oolongs are a completely different tea from any other, and they're one of the most wildly differing flavors you'll ever find.

Grab yourself a cup of tea and let's get talking. 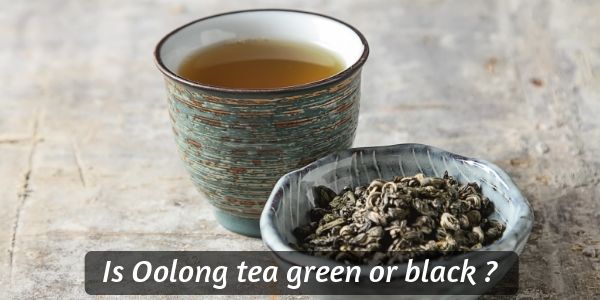 So is oolong tea green or black ?

Neither. Oolong tea is not black tea, nor is it green tea. It's a very different tea from both, mostly because of the way this tea is processed.

The leaves of the oolong are bruised, dried, lightly rolled, roasted, final rolled, and then left to dry completely.

This entire process can completely change the taste of your oolong, depending which way the tea master wants it to go.

Also, depending on when the leaves were harvested, the entire direction of the tea can be shifted. Spring harvests bring floral notes, while autumn and late autumn bring woody, malty notes.

So you see, even if the leaves of an oolong are the same as a green tea, they're very differently processed. This is one of the most mysterious and hard to pin down teas, and it deserves a whole talk on its own.

First, let's talk about the teas used in an oolong tea.

What leaves are used for oolong tea ?

Normally the tea plant grows all year round, only going into a dormant state in the winter season (December and January, part of February).

This means that the leaves can be harvested any time of the year, aside from the winter time.

Traditionally, leaves are picked in Spring (around late March), and those have a fairly floral aroma. Now, these are the same leaves that would normally be used for a green tea.

The young leaves, usually two leaves and a bud, when meant for an oolong will be harvested in later season as well, if going for a maltier aroma.

Green teas are never harvested late in the year.

Black tea leaves are sometimes harvested late in the year, like the Darjeeling second flush. Though most are harvested mid-summer.

So again, tea leaves that are meant to be come oolongs are picked at different times of the year, and those times overlap with green or black teas sometimes.

But the biggest difference lays in how the oolong is processed, especially compared to green and black tea. 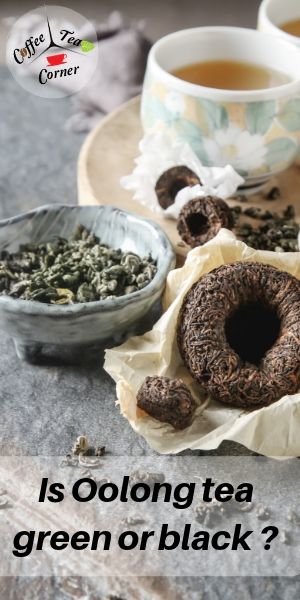 How is oolong tea processed ?

Oolong tea leaves, after being freshly picked, go through these steps:

Withering. Leaves are shaken and bruised to start the oxidation process, which will be a major part of how the oolong tea develops. Then, the leaves are left to dry in the sun until about half their moisture is gone.

Once the leaves have withered, they're allowed to cool down and they will become very flexible, leading to the next step.

First roll. The very flexible leaves are starting to change their shape. You've see dead leaves in the autumn, and how their edges start to curl and lose shape. This happens with oolong tea as well.

So now, the leaves are lightly rolled into either small balls or twisted into long strands. This helps with further oxidating the leaves and to give them a preliminary shape.

The leaves are then roasted, which will stop the oxidation level to the point the tea master wants it. The oxidation happened while the tea leaves were being withered, rolled, and exposed to air.

Roasting the leaves stops this process and is irreversible. Then the tea master can proceed to the next step.

Second rolling, which is the final rolling of the leaves. This is the final form the tea leaves will have, either as tight little balls, or twisted rolls. Either way, after the leaves are rolled/twisted, they are left to dry out completely and then are ready to pack into containers.

Now, this is a very complicated process that takes a few days. Black and green tea take much less time, as their process is much simpler.

Both are picked, withered, roasted, and then dried. Black eta has the added step of oxidation. This is one of the key aspects that sets oolongs apart from oolong tea.

And depending on how much the oolong is rolled the first, and second time, or how long it was roasted, it can have varying flavors. There are many oolongs, and a very skilled tea master can make one that resembles nothing you've ever had.

To this day I am still very impressed by Milky oolongs, that have this wonderful butter/biscuit aroma to them, like the richest milk you've ever had.

Some oolongs will be less oxidized and roasted, and will resemble a green tea. Some might be roasted fully and resemble more of a black tea.

As you see, oolongs cover the wide space between green and black tea.

Because of how many steps there are to making an oolong tea, and taking into account that each change in these steps can completely change the taste of an oolong, there is very little chance to pinpoint the exact taste of an oolong.

You see, if the leaves were picked in Spring, the overall tone would be a flowery one. But if it were left to oxidize for a long time, then those tones might just become fruity.

Conversely, leaves picked in Autumn will have a malty flavor, and if they were lightly oxidized and them roasted they're have a nutty, woody aroma.

Some oolongs are smoked over open fire. Some are somehow able to produce that milky taste I was talking about earlier.

As for a good oolong to enjoy, I recommend the Iron Goddess of Mercy. This is a very beautiful tea that has thousands of years of tradition behind it, and an impressive legend as well.

The Iron Goddess is actually one of the most precious Chinese teas, and a benchmark for quality oolong teas.

It should present a nutty, slightly sweet taste and you'll get a darker looking brew.

This set from Oriarm brings you 250 gr/8.8 oz of tea, and that will last you several months if you drink it ever day.

Really, oolongs are many and they're all delicious. Your best bet would be to read the tea label carefully to figure out the flavor profile of the particular oolong you want to buy.

I haven't had oolong often, but I was always very happy with it.

Oolong tea is one of the most mysterious kinds you can get. It's not always going to be the exact same tea, as it can change according to how the weather was when the tea was grown, how it was processed, and even how you choose to prepare it.

But oolong is neither a green nor a black tea. It might be easier to think that is has to fall into one of two categories, but really oolongs are an entirely different tea from anything you've ever had before.

Which is good, since it means you'll be able to discover new tastes.

« What Leaves Are In Green Tea ? (What Your Fave Tea Is Made Of)
The Best Coffee Brewing Method For Each Need »