Have you ever heard about the one with the squeezed teabag ?

Apparently you're not supposed to squeeze it.

You're also not supposed to let it sit in you teacup more than it needs to.

But why shouldn't you squeeze the teabag after it's done brewing ? After some very interesting research, here's what I found. 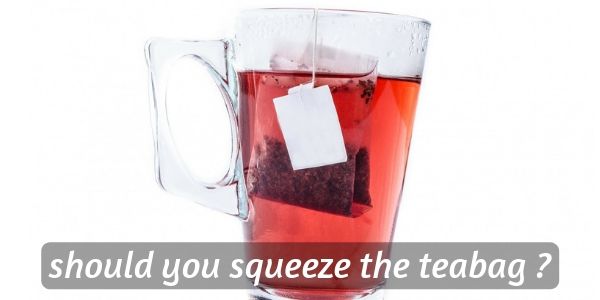 So why should you not squeeze the steeped teabag ?

You should not squeeze tea bags or tea leaves, as you will release more tannins. This will make the tea become more bitter, and will darken the tea as well.

The end result is much like oversteeping - a tea that is too strong, too bitter.

If you're using black tea, then you're definitely getting a big serving of tannins. If you're worried about that, don't be. They're fairly harmless if you don't go overboard.

There's more to this old debate than just tannin content, so lets get into detail.

When you brew tea, and use a teabag, you will most likely dunk it a few times, and then once it's done you might want to squeeze the life out of it.

And flavor. You paid for that flavor, dammit.

But, especially with black or dark teas in general, tannins may get released in greater numbers if you squeeze the teabag.

Now, this does have a basis in truth, in that hot water moving rapidly through tea leaves makes the compounds release faster.

But the amount released by squeezing the teabag is negligible.

As in, you won't ruin your tea by squeezing the teabag, because you've got more tannins in it. You run a greater risk of contaminating the tea with whatever is on your hands, like hand cream or some food.

What are tannins  and why do they matter ?

They're a sort of antioxidant, much like the ones found in green tea. Too many of them can get your tea bitter and astringent. In short, it's something that must be kept in balance, otherwise your cup of tea won't be very good.

Respecting proper brewing methods will make sure your tea doesn't get bitter. 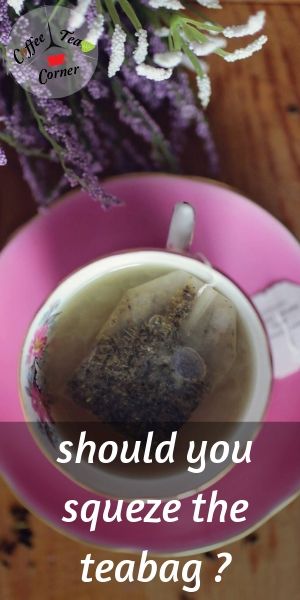 2. Etiquette plays a role too

Another reason, and I think this is more likely than the tannins, is that it's just bad manners to squeeze the teabag.

Especially when in company.

But we all do what we like when not in company, don't we ?

Like wearing pants, not squeezing the teabag is something you need to observe in polite company.

And after all, who wants to see you doing that ?

This has also led to the assurance that the tea isn't contaminated by food, or dirt, or whatever else is on your hands at the time of making tea.

Even something as unimportant as lotion can become an odd flavor in your tea, if tea drops trickle down your hands into the tea.

An annoying rule, I know, but apparently very useful.

3. You risk getting tea leaves in your tea

Yet another reason - they just keep coming - is that most people don't really know when to stop squeezing.

So they end up with broken teabags, which spill their contents into the tea.

Which will, again, ruin the tea.

I'm guessing that by all accounts it's just better not to squeeze the thing, and just be safe.

After all, who wants bits of tea to choke on ?

Up until researching this topic, I never really stopped to think whether I squeeze the teabag or not.

But I did. So now I'll continue to do so, but be very careful to not break the teabags.

I also don't use black tea or green tea in teabags, only loose leaves. The only teabags I have are herbal/fruity teas.

So no harm done there.

« Drip Filter VS Pour Over Coffee - 5 Differences In Taste And Brew
Is It Better To Drink Coffee Black ? Here's Your Answer, And Why »