If you're wondering whether you can reuse those coffee grounds for another cup of coffee, let me help you out. This is something every coffee drinker as asked him/herself before, I think.

Especially if you're a tea drinker and tend to reuse your tea leaves. But there are some key differences. Let me explain. 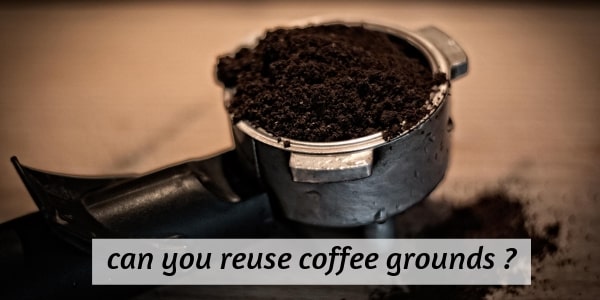 So can you reuse coffee grounds for a second cup of coffee ?

Making another cup out of the coffee grounds you already used is not going to make you happy. The caffeine is nearly gone, the flavor is gone, and you'd be left with a murky, not even fully colored infusion.

Let's see what actually happens when you make yourself a cup of coffee , so you can better understand why reusing coffee grounds is not okay.

What happens when you brew a cup of coffee

Let's take a measure of ground coffee, with a measure of water. Measure them as you would normally make your coffee.

They also release some CO2 through this process, and you'll notice some foam and bubbles on the top of your coffee grounds. This is easy to see if you're using a manual filter coffee, or a turkish ibric.

Once the water has sat with the grounds for an amount of time, it will drip through a filter/strainer into your cup so you can drink it.

The dripping coffee has taken some important elements with it into your cup. It's taken caffeine, which is the main reason you're making a cup of coffee in the first place.

It has also taken the flavor and aroma of your coffee grounds, along with any great coffee oils and proteins and vitamins that are present in your coffee.

The antioxidants have gone with the dripping coffee into your cup as well, so there really isn't much left in your coffee grounds to squeeze out.

If you were to brew a cup of coffee again, using the same method, you would be disappointed. Even if you used hotter water, and only half as much, your coffee will be very poor, and the caffeine won't really be there. 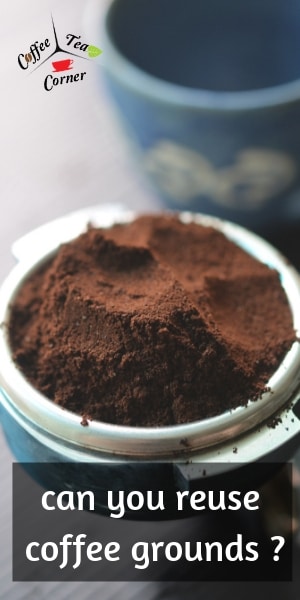 Of course, this depends on what kind of brewing method you're using. All brewing methods exact the caffeine from coffee, but some extract it much better.

For example a French press keeps the water in contact with the coffee for several minutes, extracting as much caffeine as possible through this method.

All flavor and caffeine is extracted this way. Trying to reuse a French press with the same grounds is pointless.

A drip-filter keeps water in contact with the coffee less than a French press, but it's more than an espresso. As such, you average cup of filter coffee has about 150-200 mg caffeine per 226 ml or brew.

A Turkish ibric will be much along the lines of a French press. The water is boiled, then the grounds are added, another short boil, then they're removed off the heat. The grounds have to sit for a few minutes, which is also the time they need to settle on the bottom of the ibric.

This was my coffee every day at the dorm in college and it was the strongest coffee I ever had. This kind of coffee is up there with the French press in terms of caffeine content.

Vietnamese coffee is another way is extracting everything possible from the beans. The phin used is a double filter which can make the coffee take up to 4 minutes to fully brew. That's a strong coffee, I'd say.

That makes the espresso able to extract almost (but not quite) as much caffeine and flavor from the same amount of coffee as a filter, but in a much shorter time frame and for a much smaller serving size.

You're better off making yourself another, fresh cup of coffee

If you've just had yourself a cup of coffee, and would like another, please don't reuse your coffee grounds. Let's say the caffeine and flavor are still present after your first brew.

Unless you're brewing your second cup of coffee less than an hour after the first, you're going to have a serious amount of bacteria and fungi trying to make their home in your coffee grounds.

They're wet, they're warm, and they would be a great breeding spot for anything nasty. This is actually the case for reusing tea leaves too, except those can sometimes give a better second cup depending on what kind of tea you have.

You really need to be careful what you reuse, and how you do it.

Unless, let's say you've got a glitch in your filter coffee maker, and the coffee wasn't properly wet. You can immediately run another measure of water over your coffee grounds, and stop them from dripping for a few seconds.

This will make sure your coffee stays in contact with water a bit longer and more is extracted from it.

Other uses for your used coffee grounds

If you don't feel like throwing away your precious coffee grounds, there are a few things you can do with them.

And let's face it, some coffees are in fact quite precious, if you take into account their price point or origin. Like the Kopi Luwak from Indonesia, or the Ethiopian Yirgacheffe.

So, you can reuse coffee grounds in several ways. The first I can think of is a body scrub. Now some may agree, some may disagree that this is a good idea.

Not everyone tolerates coffee grounds as a body scrub, partly because they might be allergic and partly because not every ground type is alright for this.

You would need a medium-small grind for this. A medium or large ground will just hurt the skin and it won't do very much for you. Too fine a grind and you'll be losing the coffee in the shower, plus it won't scrub a thing.

Use it as you would use any shower scrub, just keep in mind that it does not wash you. So you will need shower gel as well.

Coffee grounds can sometimes leave a slight stain, if you're fair skinned. And depending on the type of coffee you have (Robusta to be clear) you might find you skin has a bit of an oily feel afterwards.

It's up to you if you like how you skin feels afterwards or not. My mother likes it, yet her skin isn't dry to begin with. I for one don't like body scrubs at all, but I've tested coffee like this before and I was okay with the result.

If soap making is your hobby, then you can also use the grounds in your soap and make it a scrub soap as some hygiene companies do. The same I think would be possible with home- made candles, so the coffee grounds can give the candles an authentic coffee scent.

Another use for your used up coffee grounds is fertilizer for your plants, if you've got any in your home or garden. Make sure to sprinkle it well onto the dirt, and not to pile it up too high.

Just keep in mind that most of the nutrients in used coffee grounds will be gone, so you will need to re-add them to your plants as needed.

Reusing coffee might sound like a great idea at first, minimizing waste, being resourceful, pinching pennies in some cases. But for your own health and enjoyment a second cup of coffee made from the same grounds won't be alright.

You're better off making yourself another cup of coffee altogether. Or, if you need the second cup of coffee for caffeine and not just taste, consider switching to a good quality black tea.

Black tea leaves can be reuse twice if you steep them right, so you'd be fine with the second cup as well.

« Is Coffee A Fruit ? The Surprising Truth About Your Morning Cup
4 Differences Between Matcha And Green Tea You Need To Know »