Looking to get more uses out of your tea leaves ? That's actually a fairly common thing to try, but let's see if tea leaves can be reused successfully. And if they can, which teas can be steeped several times. 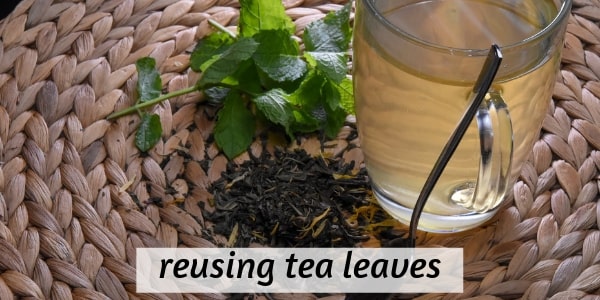 So can you reuse tea leaves ?

Yes, tea leaves can be reused. You will get an average of 2-3 steeps from loose tea leaves, but it varies according to type.

Some teas require you to steep them several types to develop their flavor, others lose flavor quickly after the first steeping. Not all teas are the same, so you'll have to take that into account. Yes, I've covered that in this article, so no worries.

The whole practice of reusing tea leaves stemmed from the tea ceremonies of the East, where large amounts of tea leaves were used in small amounts of water. Essentially making a continuous brew with small cups of tea.

The Western practice of reusing tea leaves is fairly different, and I'm going to assume that's what your question is about. So, this article will deal with the Western steeping and brewing times and methods.

If you want to be safe, throw the leaves after 3 hours

You might ask how long you can keep tea leaves between steeps. The best thing to do would be to reuse them within the span of 3 hours. This is mainly due to the temperature at which your leaves remain, how quickly bacteria can grow to dangerous levels, and where you keep your leaves.

So if you brewed some tea in the morning, drained all the water, and don't plan on brewing another tea until the evening you should throw the leaves out.

Not only does bacteria grow, but the leaves themselves become oxidized. They won't hold as much flavor if you brew them again after several hours. And they might just give you a very dark colored brew, because of the oxidation.

This is all because moisture and exposure to air is what will ruin your tea leaves. So  do your best to avoid this from happening.

Drying them out won't help much

What if you dried them, though ? This won't help either. Actually this ruins the tea even more. The moment you set out your leaves to dry, you are letting a good portion of the aroma evaporate.

Not to mention that fact that to completely dry them out you will need to squeeze all the water out of them, and then lay them out individually to dry onto a towel. If you don't, the moisture trapped in pockets between the leaves will make the tea a health hazard.

For all intents and purposes, I recommend avoiding this method. Your tea will be a weak brew, and there is really no reason to hold onto leaves that long.

Best course of action would be to brew a smaller amount of leaves, and throw them out after you're done.

Even strong teas that can withstand a few steeps should not be dried and then made wet again. For example a Pu-erh tea can give you 8-10 steeps, but that does not mean they should happen in the course of 24 hours, or even 12. 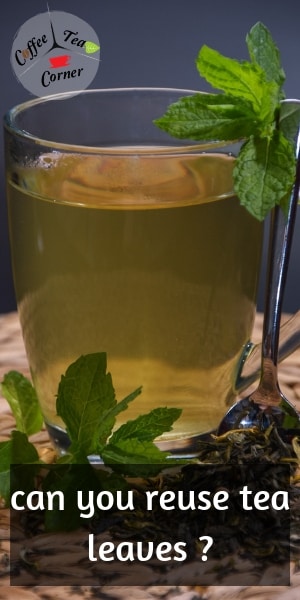 Some teas can be reused, some are better left alone

Please note that brewed teas can and do go bad, so if you've made too much, don't hold onto it too long. Best to share it with someone and brew less next time.

If you're using a cold brew method, then most of these teas will work almost the same. Just know that cold brewing will need a longer second steeping. And that might be too dangerous to try, given how fast bacteria multiply and where you can safely keep the brewing tea.

So let's see which teas are fine to reuse.

Black tea is a fairly oxidized and processed tea, so it will not yield more than 2 brews that are actually flavorful. The first brew should be done as usual, and enjoyed.

The second steep needs a longer time, add 2-3 minutes to the usual time for the first steep. The temperature of the tea will not matter very much, it still needs to be hot water but it doesn't necessarily have to be 90 C/194 F.

The leaves are already open, and they will release their aroma with more ease than the first steep. It's just that there's not as much left, so a longer steeping time is necessary.

Pu-erh can steep up to 10 times, depending on the tea

Pu-erh can brew you several pots of tea from a single serving of leaves, since it's a fermented tea that has become better with age. Much like an old wine.

The beauty of a Pu-erh tea is that the more times you steep it, the deeper and more nuanced the flavor. Some flavors only come out after the leaves have been steeped for 3-4 times, for example.

This is the only tea that can even take such a large amount of steeping.

Oolong, green, and white can give 2-3 steeps

Oolongs and greens and whites can't really take more than 2-3 steeps. These are delicate teas, yet they still have a lot of aroma left in them after the first steep.

The oolong especially might surprise you at the second cup, since it too(much like the Pu-erh) changes flavors a bit after the first steep.

The green tea and white tea will oxidize faster, with the white being the fastest. So you should definitely not play around with how long you keep your tea leaves wet but unused after you first steep them.

White tea in particular, being the most sensitive, can turn a very dark color if left enough time in a wet environment and exposed to air.

Herbal teas are a hit or miss

This is very much dependent on what kind of herbal tea you've got. For example a weaker-to-medium tea like a rose petal or linden tea or pine bud wont' really do well with a second steeping. They produce a weak enough brew the first time, as in they need a longer steep time and a high temperature.

Other teas like mint or sage or lavender, which are very fragrant might hold up to a second steep quite well. You might need to give them more time, to get all their flavors out again.

A forest fruit (with actual dried and crushed berries) might be a good option for a double steep, especially if you're using blackcurrant, cranberry, strawberry since these are very strong berries both in taste and in color.

So you're probably going to have to try it out with the herbal teas. Some might hold up, some might not. In the end you're not losing anything more than a cup of hot water if the second steep doesn't go well.

How long to keep used tea leaves between uses

This will depend on what kind of infusion style you're using. If you're using the Western style, you shouldn't leave them for more than an hours at a time.

Western infusion style is the classic teapot we all know. Get 2 teaspoons of loose tea leaves, and add to 226 ml/8 fl oz of hot water, let steep, and then serve. So it's a lighter tea, with a larger water to tea ratio.

Sometimes these teas are made to serve 4-8 cups of tea at a time, so the time between the first brew and the second is often too much to safely use the leaves again.

Unless you're serving a large party of guests, in which case another brew can be made immediately after serving the first one.

Another style is the Eastern or Gongfu style. This one uses a water to tea ratio almost opposite of the Western one. Here, a large amount of leaves (compared to the water) are steeped every few minutes with small amounts of hot water.

This produces many small cups of brew, which can be as light or intense as you want them. But usually they're not steeped for more than a minute at a time.

How long you keep the leaves between each steep is up to you and how fast you drink your cup of tea. Still, try to not go over an hour per cup.

Gongfu steeping lets you enjoy your tea for several hours, making small cups of tea throughout the day. For this kind of steeping method every tea is alright, but it's especially the Pu-erh ones that shine.

Pu-erh teas slowly release their flavor with each steep, so getting 8-10 steeps from them is no big deal.

Reusing tea leaves will give you a whole new tea experience, if you've never tried this before. Of course, it depends on what kind of tea you have. But most will give a good enough second cup of tea.

I for one do this more often with the green teas, since the bitterness is almost gone in the second steeping. The flavor is till there, but the tannins are mostly gone since they were infused into the first cup of tea.

« Can You Add Milk To Green Tea ? On Enjoying A Good Cuppa
Vietnamese Coffee Beans - About The Roast, Brew, And Taste »