And how does roasting affect caffeine in the first place ?

Well, let me help you out here. 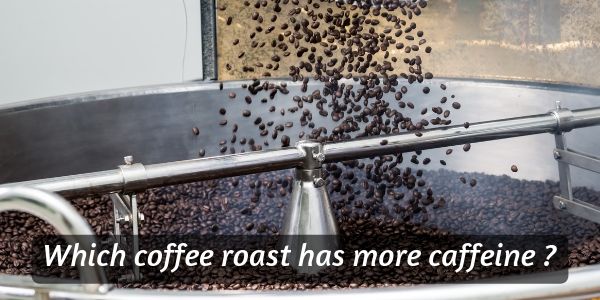 So which coffee roast has more caffeine ?

None. All roast levels contain the same amount of caffeine. The only thing that influences that is what kind of coffee bean you use, Arabica or Robusta.

The only difference, and it's a vague one, is that the coffee beans expand slightly during the roasting process. You have the same amount of caffeine on a larger area surface, which is then ground down for brewing.

Darker roasts could possibly end up having 1% less caffeine than lighter roasts. But you'd have to be almost too much of a coffee fan to insist on that.

Still, it's something you'll hear time and time again.

Now let's get a bit into the myths surrounding caffeine levels and roasting, to see where all these shenanigans started.

No, no it doesn't. Again, the main culprit here is the belief that the coffee bean's size changes dramatically during roasting.

It does change size, just a tiny bit. Less than it does when ground coffee blooms, and even that is not much.

So this means that if you use light coffee, that's supposedly smaller in size than dark coffee, would have more caffeine per surface are than dark.

Which translates into more caffeine when you grind your coffee.

This is not true, because there is almost no difference between light and dark roasts in terms of size and caffeine.

Still, some people will believe this and insist they're right.

There is one thing, though.

But you'd have to be really nitpicky about it. 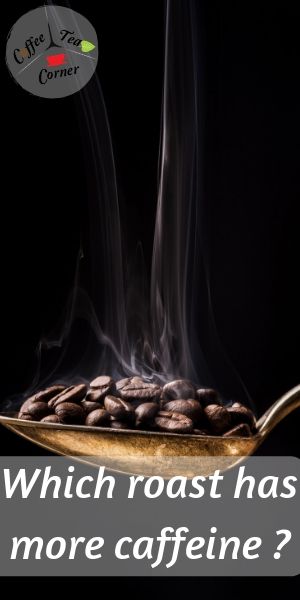 Caffeine is a solid substance, does not burn off easily

Another reason light roasts don't have more caffeine that dark, or dark more than light, is because caffeine, as a substance, is a solid.

This means that is you were to set it on fire, it would have a hard time catching fire, and then burning off.

Think about it. You've got a bag of fresh coffee beans, and they're heavily caffeinated.

That same bag, if you leave it open for a year, will lose all of its flavor. But not caffeine.

Caffeine is a very hardy substance, and it won't dissolve and then evaporate. It can extract into your cup of coffee, but if you were to let that evaporate for a few days, you'd find a sticky mess at the bottom of your cup.

And it will be hard, and contain a thin film of caffeine. It's not going anywhere.

Roasting coffee is not going to ruin the caffeine in the bean.

Alright, but what do we do with this other silly myth about darker roasts having more caffeine ? Why do some people think this is true ?

Well, it mostly has to do with the taste of a dark roast.

Which is very similar to the taste of pure caffeine. Caffeine is very bitter on its own, but you won't really get to single out its taste in coffee.

The harsh, strong taste of dark roasts is associated with strong coffee

But why is this ?

For the most part, people don't really train their taste buds, and to be fair that's very hard to do when you've got a drink as strong as a cup of coffee.

It engages all of the tastes.

So what do most people grow up with, as coffee ? Not exactly the best coffee, but they get strong tasting coffee. Which is what they (me included) grow up to associate with a very caffeinated coffee.

Stronger coffee = stronger taste, some would day. And in a way it is, depending on what you're looking for.

There's also the fact that strong tasting coffee usually contains more Robusta beans, which are the strongest tasting beans ever.

They're almost too strong, but they have their great moments too.

And they also have double the caffeine than Arabica beans, which are much milder in taste.

So we've grown up associating harsh coffee with strong coffee, and unconsciously deciding that it's more caffeinated.

In truth, the darker roasts aren't more caffeinated, they just resemble Robusta more and as such taste the way a very caffeinated cup 'should', in our minds.

So how do you add more caffeine to your cup of coffee ?

Alright, so now I've spoiled your dreams of getting rich on only selling light roast coffee.

But how do you get a better, more caffeinated coffee ?

You don't. You just add more coffee to the water, but also minding the fact that you're probably going to need to adjust the brewing time.

I recommend only doing this with filter or French press coffee, as those allows you longer steep times.

And if you're using espresso and it's not enough, consider switching to a drip filter, if only for the caffeine kick.

Switch to a different brewing method for more caffeine

One thing to consider, some coffee brewing methods extract more caffeine that others, or at least they extract it better.

This is because of the longer steeping time allows coffee to release everything it needs to.

You don't need a long time, unless you're making cold brew coffee. There you'll need 12-18 hours of steep time for everything to be done extracting.

So which coffee brewing method offers the most caffeine ?

Aside from the cold brew I mentioned, there's the French press. It lest your coffee steep long enough at a temperature you choose, and most of the caffeine will be released.

There's also Turkish coffee, which again lets the coffee steep as much as you want.

And there's also filter coffee, either drip or pour over.

Both methods offer more caffeine than a cup of espresso.

When you buy your coffee already roasted, you're going to find all kinds of information on the package. Some of it useful, like where the coffee is from and when it was roasted, and some of it a bit pointless and hard to prove, like the caffeine content.

The only roasts that contain more caffeine are those that are mixed with Robusta beans, or are purely Robusta beans.

Which is not something many people would happily drink.

Still, it's something to know when you think about what kind of roast to get for your coffee.