Cinnamon coffee is one of those drinks that manages to make everyone happy. It's a wonderful mix between the strong, earthy coffee flavor and the spicy sweetness of cinnamon.

For me it just screams Autumn, and it's very much a comfort drink. Maybe it'll be that for you as well.

But first, let's talk about what this coffee is, and then how you can make it, since cinnamon is not the easiest texture to work with, as you'll soon find out. 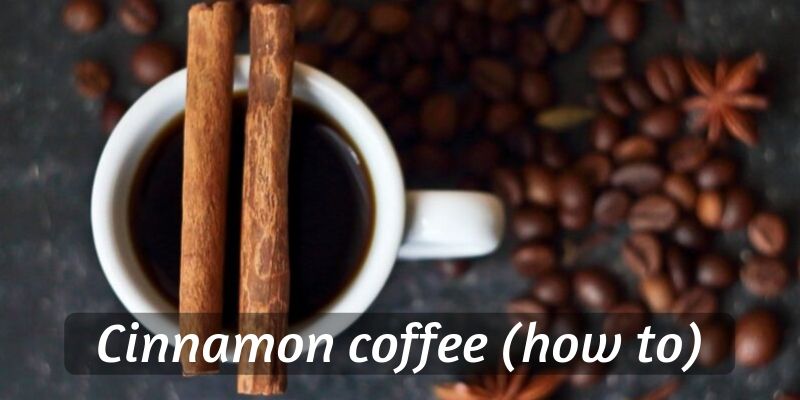 What is cinnamon coffee ?

Cinnamon coffee is regular coffee but with cinnamon added to it somewhere along the process of brewing it.

It could be ground cinnamon that's mixed into the ground coffee, it could be cinnamon sticks stored with the coffee beans.

Whatever method is used, cinnamon imparts a warm, spicy, and sweet flavor to regular coffee. It manages to make even harsh black coffee more pleasant, for those who would still like to keep away from sugar or sweeteners.

Adding cinnamon to coffee has some health benefits, though it was mostly done for flavor. It's reminiscent of cardamom coffee or spice coffee, as a drink with an Arabian or Indian influence.

You'll find spiced coffee served in many coffee shops, though the spices used may vary and might not always contain cinnamon.

Making cinnamon coffee is easy enough, but it hinges on some of your preferences, and how sensitive you are to texture in coffee.

How to make cinnamon coffee

You can do this a few ways, and I'll walk you through all of them.

The main point is that you need to blend the cinnamon flavor with coffee. Now, you can do this before you even brew the coffee.

This means you'll add several cinnamon sticks to the coffee beans or ground coffee you already have. Let them sit together in an airtight jar for several days, or maybe a week, for the flavors to really mix.

The resulting brew won't be overly cinnamon toned, but it's definitely going to bring the flavor.

2. Grind fresh cinnamon and add it to the brewing coffee

Another way to do this is to grind some fresh cinnamon with a blender or a mortar and pestle. Where you stop in terms of size and texture is up to you, but generally smaller brews faster.

If using a drip filter, add the ground cinnamon to an empty teabag or coffee filter. Fix it in the carafe so it stays closed and no cinnamon is leaking. Make sure it stays put.

You're going to let it steep in the carafe with the coffee for a few minutes.

Why not put the cinnamon into the ground coffee, right in the filter basket ? Because finely ground cinnamon will take up lots of water, and the fibers in it will form a sort of stringy mess and make brewing much slower. You risk backing up your machine.

Believe me. I've tried and I got the slowest 7 minute brew of my life. Better to add the cinnamon afterwards if you're using a very fine grind.

Another thing you can do is leave it in larger chunks, and add it to the ground coffee in the filter. You needs chunks about the size of cracked peppercorns. This also works for French press and Turkish coffee. 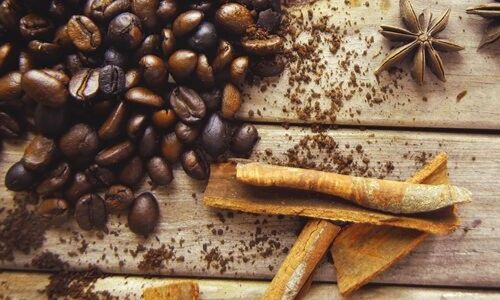 3. Steep cinnamon directly into the coffee

Another way to make cinnamon coffee is to use whole cinnamon sticks (or just break them up into 2-3 smaller pieces) and let the coffee brew directly over them (if using drip filter, or Chemex).

This also works for French press, Turkish coffee, and cold brew if you want a cooler coffee.

4. Steep cinnamon into the coffee water, then brew the coffee

Another way to make cinnamon coffee is to brew cinnamon tea first. This makes the whole drink take longer to make, yes, but leaves you with the most flavorful version of cinnamon coffee, without adding ground cinnamon.

What you need to do is bring the water to a boil in a kettle, and once it's boiling turn the heat off. Add in 1-2 whole cinnamon sticks (break them up if you need to) and let them sit for about 10 minutes, covered.

Strain through a filter or strainer and then use the water for French press, Turkish coffee, Chemex, Aeropress, or any sort of pour-over.

Those methods allow you to thoroughly wash the vessel or machine that brews the coffee. This is important, since there will be quite a bit of residue in the water chamber.

If you were to try this with an espresso machine or drip filter you'd ruin it in time since this water isn't pure and will build up on the installation in time.

Can you dissolve cinnamon in coffee ?

All this talk of keeping the cinnamon separate from the coffee, or using large chunks of cinnamon to brew with. Why though ?

Well, it's largely because as delicious as cinnamon is, it's a pain to mix into liquids like coffee or tea.

This is because cinnamon is actually the inner bark of a tree. Which means it's made up almost entirely of fiber, the kind that can not and does not dissolve.

Cinnamon is basically little pieces of bark, and even if you grind them up to a dust they still won't melt or dissolve into a drink.

You'll never notice the texture if eating something with cinnamon in it, like cake or a pudding or cream, but in tea or coffee it's going to stand out.

And this is why we have to be careful how we add the cinnamon to the coffee, and also why you need to take all those extra steps I mentioned above.

How much cinnamon do you put in coffee ?

It depends on what you're after. The more cinnamon you add, the stronger the flavor, but it's also going to become actually spicy.

Yes, too much cinnamon can make a food or drink taste 'hot', like chili or pepper would. This is because the cinnamon essential oil is also spicy, and there's quite a bit of it in cinnamon sticks.

So, for one standard cup of coffee - most folks drink about 8 oz/236 ml - I think half a teaspoon of ground cinnamon is more than enough. It might be too much for those with a very sensitive palate.

Generally you can get a whole teaspoon from ¼ of a cinnamon stick, or maybe less. Once it's ground up cinnamon tends to take up a lot of space.

Adding cinnamon to your coffee will also give it a sweet aftertaste, which means there's less need for adding any sugar to your coffee. Personally I think that's neat, and a bit of a life-hack.

There are health benefits to adding cinnamon to your coffee. We should take a closer look at them and see just how much this duo can do for you.

Please note that cinnamon coffee, like most herbal remedies, need a few weeks of constant and consistent usage to show any effects.

That is, drinking one cup of cinnamon coffee today and expecting to see results tomorrow is unrealistic. Drinking cinnamon coffee every day for several weeks or months may show clearer results though.

1. Cinnamon is full of antioxidants, pairs well with coffee

As cinnamon is delicious, it's also packed with antioxidants. This actually makes it one of the most healthy spices to add to any food or drink, so you're definitely going to benefit from adding cinnamon to your morning coffee.

Aside from a high antioxidant count, which coffee boasts as well, cinnamon pairs with coffee very well in terms of flavor as well.

So it's another win for the morning coffee. However be sure to keep the sugar and milk/creamer at a low, since they can interfere with the effects of antioxidants. 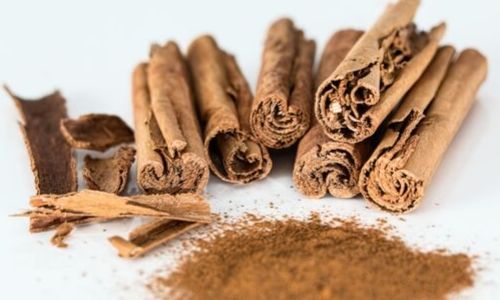 For some folks high blood sugar is a threat, and it's often linked to Type 2 Diabetes. Cinnamon may help regulate blood sugar, and through its sweet aftertaste also help in reducing cravings for sweet foods.

This ability to influence blood sugar might also help in alleviating diabetes symptoms by lowering insulin resistance. This means the body wil not need to produce as much insulin, since there is no need to overproduce.

Not only infections, but also fungi and generally boost the immune system. This is mostly due to Cinnamaldehyde, which is the active ingredient in cinnamon (also known as cinnamon oil)

A more specific example of how cinnamon's antibacterial properties may help is with bad breath. Using cinnamon in your morning coffee may improve bad breath, and it may also reduce inflammations.

Depending on why the bad breath is present, cinnamon may work very well or only ameliorate a little.

Cinnamon is a wonderful spice to add to coffee, and it's really one of the things that makes it a bit magical.

Especially if you're adding cinnamon in the Fall/Winter season, then you're going to really love this combination.

What I would recommend is to also add a tiny bit of coconut milk to the cinnamon coffee. It's a nice combination and take the whole drink to a very comforting and delicious level.