Cold brew coffee in a French press is a nice hack if you have no dedicated cold brew vessel, or if you just want cold brew every now and then.

It's totally possible to cold brew coffee in a French press, but there are a couple things you should be aware of before you start.

So let's start with those, and then get into exactly how to brew this coffee. 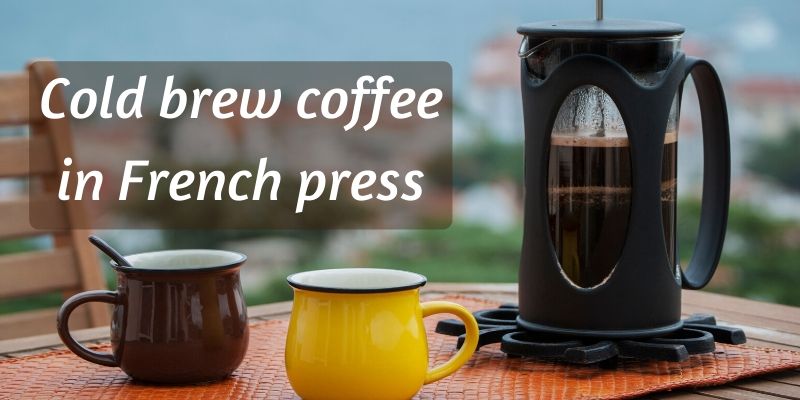 What happens when you cold brew coffee in a French press

Please note that French presses are generally smaller than cold brew jars, so you will often end up with smaller servings of coffee than with regular cold brew.

Let's talk a little about the difference between a French press, and a dedicated cold brew jar.

The main difference here is the filter you might want to use.

In that, a dedicated cold brew jar has a metal filter that's got very, very fine holes and will usually provide you a clear cup of coffee.

A bit of sediment is normal, though you'll rarely see as much as you would in regular French press or Turkish coffee or espresso.

That means that if you brew cold brew coffee in a French press, you're essentially making cold French press coffee. Which, you'll notice, will have a bit of sediment on the bottom, nearly every time.

This is normal, and it might not bother you.

If it does, there are ways around it, namely filtering the coffee after it's brewed. You can simply use a regular paper filter, as you would for pour over coffee. Or you might use a very fine cheesecloth, that's been folded several times.

Do keep in mind that if you choose to filter the coffee, you may lose some flavor and essential coffee oils.

How to cold brew coffee in a French press

Now that you know what to expect when making cold brew in a French press, you'll know why it might be a little different than regular cold brew.

I recommend you get yourself a great French press, whether you use it for what it's meant, or just to make cold brew every now and then. 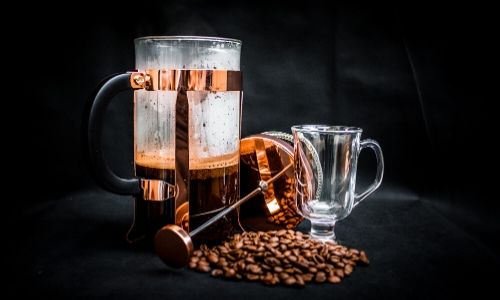 You need a good French press for this

If you're on the lookout for a great French press, then you should give the KONA French press a try.

This is a press large enough to fit 34 oz/1 liter of liquid, but you'll have to allow for the coffee grounds (explained below).

The grip is comfortable, and the whole press can be take apart and reassembled in just a couple of minutes. This comes in very handy when you'd like to deep clean it.

The French press by KONA is available on Amazon, right here.

Also, you'll find the outside of the press has a plastic casing. Durable, meaning the glass won't have a chance to break while you're handling the coffee.

And there is no actual plastic on the inside of the press, so there is none touching the coffee (except when you add the lid).

This is mostly because the grind size for regular French press is meant to steep fairly quickly (about 4 minutes). However, cold brew takes a much longer time - 12 to 18 hours - and as such it needs a grind size that's a little larger.

If you use a grind size too small, it may release more bitter/acidic element than you'd like.

That being said, you go ahead and use a grind size as coarse as you like. Start with using the same grind size as for regular French press. After all, the kind of bean you use matters just as much, and some might react better to some grind sizes.

As for the coffee to water ratio, you need to check the total volume of your French press. For example, if it can hold 30 oz of water, know that you'll have to calculate that as you final product that includes ground coffee.

Meaning you'll get something like 4 oz of ground coffee to 26 oz of liquid. This is using a 7:1 water to coffee ratio formula.

If you want your coffee stronger, use 4 or 5 times as much water as coffee.

So for example, if you have a total volume of 30 oz in your French press, using a 5:1 ratio you'd need 6 oz of ground coffee and 24 of of water.

Make sure to measure just how much liquid your French press can take.

If you overdo it and the coffee comes out too strong, you can always dilute it in your cup with a little extra water, or milk. 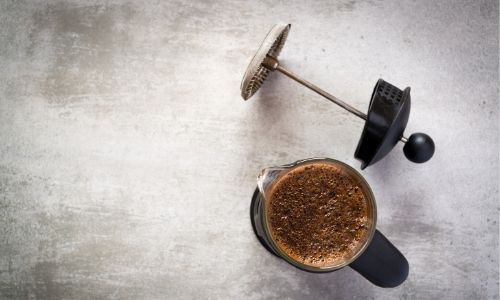 Once you've decided just how much ground coffee to use for your particular French press, get the press ready.

Remove the plunger and the filters, then add the ground coffee into the empty press. Add in the water, and gently stir the whole mixture.

You need water to be touching every bit of coffee possible, so make sure you stir the coffee well before leaving it be for several hours.

When adding the water, it's best to add in first half, and see how much more water you need to fill up the rest of the French press.

After you're satisfied with how much coffee you're going to brew, it's time to find a spot for it to sit while it brews.

Cold brew coffee takes a long time to steep. If you want a quick cup, you're most probably not going to get one because that's pretty much the nature of cold brewing anything.

It takes time, and you'll need to think ahead when doing this.

How long you let the coffee steep depends on how strong you want the coffee to be, and where you'll let it sit while it steeps.

If you let it steep on the counter, it will still be cold brew but will not need as much as 18 hours.

However if you let it steep in the fridge, then you'll need to give it those 18 hours, possibly a little more to get the full flavor.

Also, whether you let it steep at room temp or in the fridge, know that a short steep time equals weaker coffee, and a longer steep time a stronger coffee.

And there isn't really much need to reach 24 hours, even if you're steeping in the fridge.

However if your schedule is made in such a way that you'll be away for 24 hours and have no other option, your coffee will be fine. It just won't be that much stronger, is all I'm saying.

When setting the coffee aside to steep, make sure you don't add in the plunger. Leave it aside, and instead wrap some clingfilm on the top of the press to make a sort of lid. 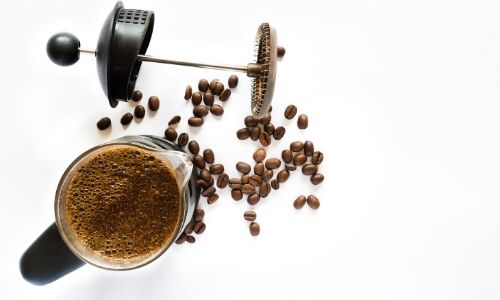 Once you've decided the coffee is done steeping, you'll need to remove the lid you've created, and instead add the top of the press with the plunger.

When ready, gently push the plunger into the coffee. Make sure to go slow, so as to not disturb the ground coffee too much.

Also, make sure to not go all the way down, touching the grounds, otherwise you won't be able to filter it as well.

This process might take half a minute, but it's going to be worth it in the end.

5. Pour or strain into large pitcher

Now, you have the option of pouring the coffee into the serving pitcher directly, or filtering it.

If you want to filter it, you can use a simple mesh strainer and place a paper filter into the strainer, and pour the coffee through that into the pitcher or jar or whatever you're going to use.

After you're done decanting the coffee, you can keep it in the fridge for up to one week, with a tight lid on. This is unsweetened, and with no cream or milk added.

You can make your own cold brew coffee, right at home !

Just use your French press as you would for any cup of regular French press coffee. Only you're adding cold, fresh water and you're not heating anything.

The end result is very much the same with regular cold brew, maybe a little cloudier.