When looking to lose weight, we're going to want the best methods, with proven results, and all the assurance we can get.

One of those methods, that we see again and again is to drink green tea or oolong tea for weight loss.

But is one really better than the other ? That's what I'm going to tackle today, and settle once and for all. 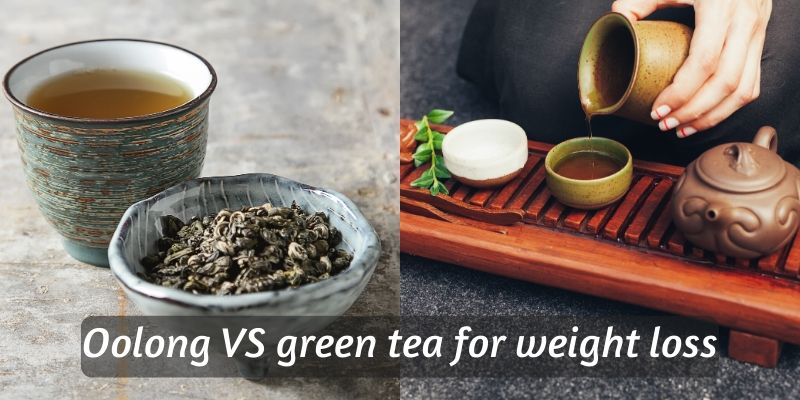 Green tea and oolong tea come from the same plant

Let's start by looking at each of these teas in part.

And we should settle the fact that both green tea and oolong tea come from the same plant - Camellia sinensis.

This means they will have roughly the same health benefits, since it's the plant itself that dictates this.

Another thing that may influence this is how each tea was processed/made, and oolong and green tea are very similar. Black tea is another story, so it may have slightly different health benefits.

Let's get a bit into this, since it matters a lot.

They differ in how they're processed, and flavor

Green tea is made by very, very lightly oxidizing the leaves before locking them with heat. This means the leaves are crushed, rolled and generally bruised a little so they start oxidizing.

How much or how little depends on the tea master and what he's after. But generally green tea is a very low oxidation tea. This is what gives it that bright, fresh flavor and sets it apart from all other teas.

Oolong tea is left to oxidize for longer than green tea, but less that black tea. This results in a different flavor from any other tea, and again the exact point where it stops depends on the tea master.

After oxidation, both green and oolong teas are fired in some way. Sometimes they're exposed to a hot over, other times they're placed in a screaming hot pan for a few seconds and then left to cool off.

Oolong tea leaves are always, always left in the heat longer than green tea leaves. And sometimes you might find oolong leaves rolled into tiny little balls, whereas green tea is often twisted or left to dry straight.

The different processing methods between the two teas result in vastly different flavors.

While green tea can have several nuances and notes, it's much more limited by a vegetal, fresh vibe than oolong.

Oolong is more like a wine, depending on how it was processed it can range from milky to smoky to sweet to nutty and anything you can imagine in-between.

At times you'll find oolong tea labeled as a 'fermented tea'. While this isn't exactly untrue, it can be misleading.

It's not fermented like Kombucha, but rather the oxidation process is sometimes called fermentation.

Oolong can also be aged, which further enhances the flavor. This can confuse some folks into believing it's fermented, since it's aged. 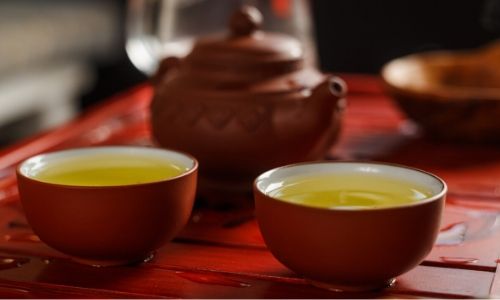 So what is green tea ?

All this means your green tea is going to be as close as possible to the original tea plant, This means you're going to get a fresher flavor, and a higher dose of antioxidants since it was processed for less time than oolong tea.

It's a tea that some folks find a little harsh if taken on its own, but it's definitely something that needs getting used to. Once that's done, you can start to notice differences in flavor and eventually the health benefits, if you drink it consistently over a long period of time.

If you're on the lookout for a great green tea, then you might want to try the Gyokuro variety.

The leaves used for this tea are the same used for Matcha, only they haven't been ground into a fine powder. This results in a faintly green brew, and smooth flavor.

If you're a newcomer to tea, or just to green tea, then I think you'll really find Gyokuro as one of the best examples of green tea. It's the closest you can get to the pure tea plant.

What is oolong tea, then ?

Oolong tea is a more refined tea, if you will.

In that oolong will have a more complex aroma than green tea, and sometimes contain notes that might seem impossible for a green tea leaf, like nutty or milky.

Milky oolong is one such example, and it pretty much tastes like what a Matcha latte tries to be.

The different processing method used for oolong results in a tea that's going to have a flavor profile and chemical structure a little different than pure green tea.

Their health benefits are very similar 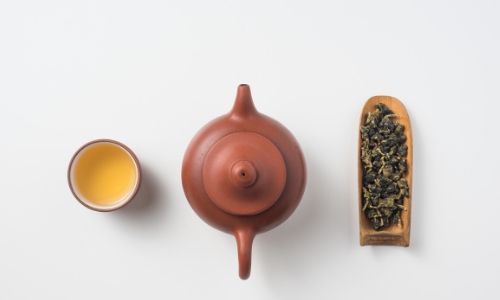 All this being said, green tea and oolong are strikingly similar in terms of health benefits.

Sure, the fact that oolong is more oxidized means slightly less antioxidants, but in general they're going to do essentially the same job.

I'll get into some detail, and hopefully make things clearer for you.

Alright, when looking to shed some weight we're always going to look at what smaller processed help with this, Or maybe let's call them markers.

Probably the most obvious marker is just reducing body fat.

This can be measured with an actual tape measure, or by a doctor with several elements taken into consideration, or just by you trying on a certain piece of clothing during the weight loss journey, and seeing how it fits.

Green tea seems to work a little better here (2), since it has a slightly higher antioxidant count. A study was done on rats that were fed a diet high in sugar, and then treated with green tea, black tea, and oolong tea.

The results showed that green tea managed to normalize cholesterol and fat levels after 18 days of treatment, while black and oolong teas achieved the same results after 25 days.

So green tea seems to work better, as far as we know.

Also, oolong tea and green tea are both capable of reducing blood sugar and helping in type 2 diabetes cases (4).

Both green tea and oolong have a certain amount of caffeine

Another thing we look for when thinking of a tea to help with weight loss is how much caffeine it has. It's well known that caffeine helps the body reduce fat deposits and burn it more efficiently.

When it comes to green tea and oolong tea, they both contain a certain amount of caffeine. However caffeine from tea is hard to calculate in very specific and clear terms (5).

Getting a specific number of milligrams of caffeine per ounce of brewed tea is hard, since the exact amount of caffeine will vary wildly from one brand of tea to another.

It depends very much on the tea plant itself, and how you brew the tea. If the soil was good, if the weather wasn't too wet or too dry when it was grown, and how many minutes you let the tea steep all contribute to how much caffeine is in your cup.

And according to research (5), there is no difference between any tea type (green, oolong, black, white, pu'erh) when it comes to caffeine. 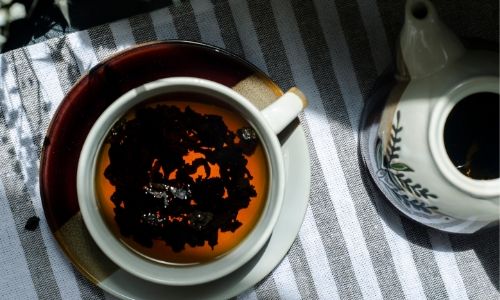 On average though, teas tend to have anywhere between 14 to 61 mg caffeine per serving (6 or 8 oz).

What does all this mean ?

If you're trying to figure out if green tea or oolong tea has more caffeine, know that they've got the same range of caffeine, and it depends on a lot of factors.

So both of them will do the job just fine.

Both green tea and oolong have a high antioxidant count

As for antioxidants, green tea and oolong tea share the same mother plant.

So they've both got a high antioxidant count (6,7), meaning they will both help reduce stress on the cells, combat free radicals, and help our metabolism be at its peak.

Green tea seems to have a little more antioxidants (7) than black, oolong, or Pu'erh, since it's made differently. It's the oxidation process that ruins the antioxidants, turning them into something a little different.

So if you're after antioxidants you should stick to just green tea.

In general, it seems green tea trumps any other tea for weight loss and antioxidants. Except Matcha, since that is the purest tea possible, and you'd be ingesting actual tea leaves, instead of a brew.

But when it comes right down to it, the difference between oolong and green tea isn't as big as green tea and orange juice.

Both teas will do the job just fine, as long as you drink them regularly, over a long period of time, and also maintain a healthy eating plan and add some exercise in your routine.

6. A Review of the Role of Green Tea (Camellia sinensis) in Antiphotoaging, Stress Resistance, Neuroprotection, and Autophagy