Matcha latte is one of those things that seems to be everywhere on social media in the past few years. It's marketed as a mix between a health drink, and a way better option than a regular coffee latte.

But what even IS a Matcha latte ?

This drink needs an explainer, since it seems to confuse just about everyone, including me. 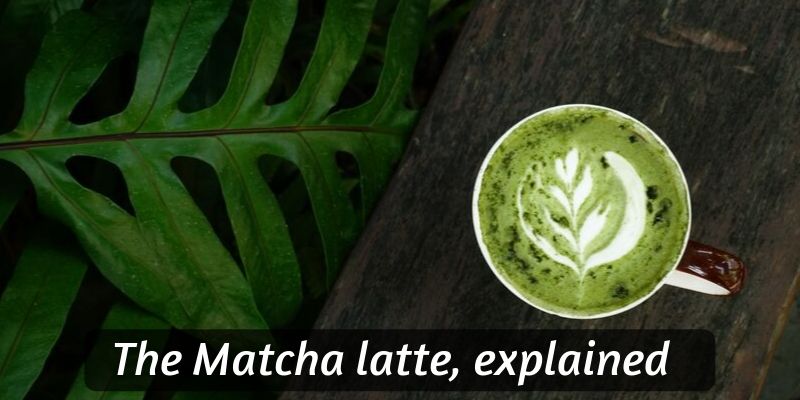 So what is Matcha latte ?

Matcha latte is a milk-based drink, and it works just like a regular latte. Except it has a shot of Matcha tea instead of a shot of espresso.

By a shot of Matcha I mean a 2 oz serving of thick Matcha tea, sweetened and mixed into the milk foam as any other coffee latte would be.

It's the Matcha that gives the latte its signature green color. And it's kind of a novelty item, since the latte art is white and green, instead of tan and white.

You can find Matcha latte with any sort of milk, but for the sake of flavor and keeping things savory I suggest using a plan-based milk even if you're not vegan/vegetarian.

I suggest using something plant-based, such as almond milk, or even better rice milk.

In terms of flavor these will work best with the Matcha flavor, but they'll form a less impressive froth.

Cashew milk might be a better option if you're looking for a more milk-like texture, but that's up to you.

And if you're feeling extra fancy or in the mood for something flavorful do try coconut milk. Not coconut water, but actual coconut milk. It goes very well with anything with a vegetal flavor, including green tea and Matcha.

If you want to use dairy milk, then you're getting that umami, buttery flavor mixed in with the green, fresh flavor of Matcha. It's not a mix that's normally possible, but with a bit of sugar and a good milk you can get a latte that somehow works.

I suggest using 2% milk, since that's the best combination of fat and protein to get a nice froth. However it might be too buttery in flavor, so if you find the flavor is a bit off, try using a lower fat percentage. 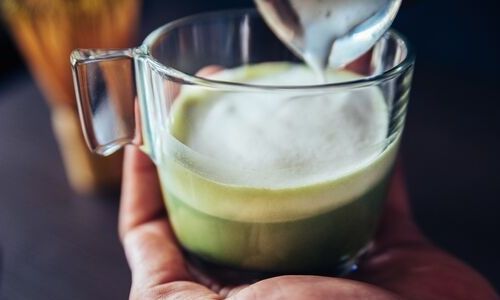 No, Matcha latte is a tea latte. The name 'latte' might be throwing you off, since it's only used in reference to a coffee drink.

While Matcha latte does have caffeine, it has caffeine found in tea. Meaning it's going to be less strong than a regular latte, and it won't jolt you awake like coffee since caffeine in tea works differently than coffee.

If you're wondering how much caffeine is in a Matcha latte, it's about 35 mg of caffeine per 1 gram of Matcha powder. One gram of powder is the usual serving for one shot of Matcha.

So unless your order a double Matcha latte, that's the caffeine you're getting.

Please note that Matcha and tea in general is really had to figure out in terms of caffeine. One batch or crop may have more caffeine than another, due to the weather conditions when it was grown, how it was processed, and how good the soil it grew in was.

Meaning you might get Matchas with more or less caffeine that I mentioned.

The only thing that makes a Matcha latte resemble any sort of coffee is the caffeine content, and the fact that it's served with milk froth.  There's latte art, and in this case leaf and flower patterns are a little more relevant, since the drink is white and green.

In terms of taste a Matcha latte might not be what you're expecting. Everyone describes it differently, an some might hate it while some may love it.

We should start by discussing what Matcha tastes like. 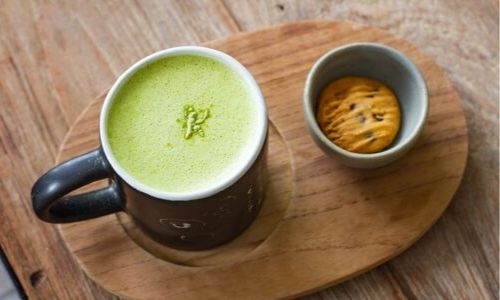 If you have a good Matcha powder, it should taste green, a little bit like green grapes, very vegetal. Not bitter, or if it's bitter it should be barely noticeable.

Finally, it should have a slightly sweet aftertaste, and some grades (like the ceremonial grade Matcha) can even be downright tasty and flavorful.

So what do you get if you add to this hot, frothed milk ? We all know how delicious warm milk is, especially steamed and frothed milk since it get an extra buttery/milky flavor.

This drink results in a flavor that can only be described as: tasty. It's got the comforting, warm tones of hot milk with the flavorful and umami-like Matcha, balanced with the slightly grassy tones of the tea.

It's kind of the perfect balance of astringent with creamy, and it's really an experience to drink this.

Is the Matcha latte really that healthy ?

Very often you'll find Matcha lattes marketed as a health drink. Either because of the antioxidants the tea powder comes with, or because of how well it manages to replace a regular latte and its caffeine.

Now, this is both true and not true.

It's true that Matcha is a super-food. but it kind of loses its power in a latte. Why ?

Because said latte has milk and sugar. The Matcha powder used for the Matcha lattes you buy are always sweetened. Even if you make it at home you'll notice it kind of needs a hint of sugar to work with the milk.

All the calories in the fats found in the milk deactivate a good portion of the antioxidants found in Matcha powder. And the sugar just goes ahead and makes everything work even harder.

Even the caffeine found in Matcha, which is already slowed down by L-theanine, is going to do its job much slower when you add sugar and milk.

Aside from the fact that you're raising your empty calorie intake when drinking a Matcha latte, since there isn't much protein or fiber for your body to process.

While there are carbs, which the body needs, they're only from the sugar.

Does the Matcha still work in a latte ? 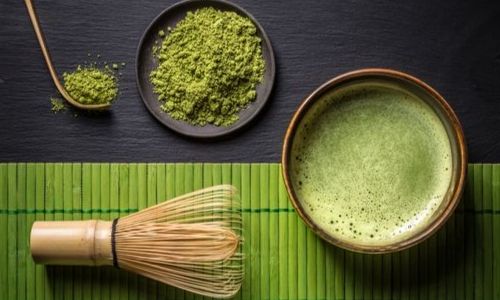 In short, no, the Matcha in a Matcha latte won't really work if you're drinking it for the health benefits.

If you want the health benefits of Matcha, you're better off drinking a regular shot of pure Matcha and eating clean.

A shot of Matcha is about 2 oz/66 ml in size, and easy enough to drink if you're looking for a quick pick-me-up.

You'll find it in most, if not all, tea houses and they should be able to prepare it well enough that you like it even without sugar. Traditionally Matcha is drunk as-is, with nothing added to it.

It resembles a green espresso - a little on the thick side, with a crema/foam on top that's going to last for a short while.

Matcha latte is an item that manages to confuse, annoy, and enchant everyone from tea lovers to coffee lovers, and pretty much all baristas out there.

It's not tea, but it is tea. It's also a latte, but with a tea that's not meant to be drunk with milk.

And all these years after it first surfaced, everyone's still not over it. With good reason too, since very rarely is there a drink as flavorful and fascinating as a Matcha latte.

If you've never had one before, you could try one, just for the hell of it and to see what everyone's talking about.

Don't expect anything, since you probably won't be able to guess the flavor profile beforehand (no one can until they try the latte). But do keep a open mind, because I'm sure at least one thing about the Matcha latte's gong to impress you.