You want to make tea, but you're not sure how much water to add to your teabag ?

That's alright, I'll guide you through this since not all teas are alike. 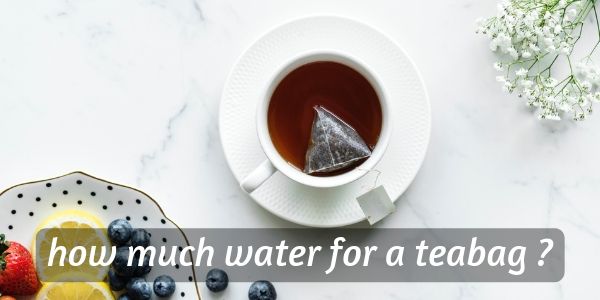 So how much water should you use for one teabag ?

The less water you use, the stronger the tea will taste.

But this can also lead to harsh tones in your tea, which should be avoided.

In most cases, the manufacturer will provide directions on the tea box as to how much water to use, and how long to let the teabag steep.

However after a while, you'll learn how you like your tea, and how much water to really add to one teabag.

But let's start with the basics.

How much tea is in one teabag ?

A typical teabag will contain anywhere between 2 to 3 gr of tea.

Generally, pyramid teabags contain more tea, however i think the difference of one gram is negligible in the grand scheme of things.I

If you want to be sure how much tea is in your teabag, you can look at the Net weight label on the tea box.

That is the amount of tea that is present in the teabags, sand packaging and paper and string and so on.

Then, you will need to divide the net weight by the total number of teabags the tea box came with. 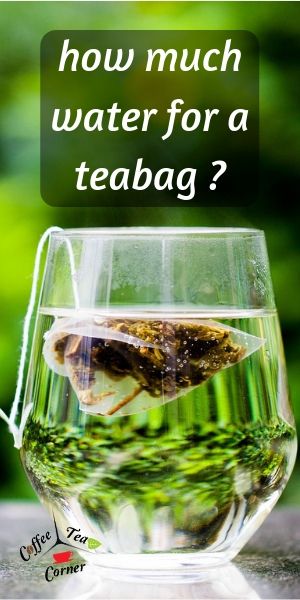 How long should you let the teabag steep ?

Teabags really steep very fast. It's part of their charm, and they usually provide a stronger tasting brew than loose leaf tea.

But, the general range of the flavor is going to be much more flat than loose leaf teas.

I usually leave my teabags to steep for about 3 minutes, possibly 2 if I'm using green tea.

However know that herbal teas might need a couple more minutes, getting up to 5 minutes.

Most tea boxes come with directions from the manufacturer, as to how much water to use and how long to let the tea steep.

This means that you can use that as a guideline, and figure out how much you want to leave the teabag if you like it stronger or lighter.

I've had teas where I forgot the teabag for 10 minutes straight, and the tea as alright.

The point is that teabags, as opposed to loose leaves, offer a much faster brewing time, but with almost no consequences of leaving the tea too long.

Most of the bits of tea inside the teabags are crumbs of processed tea leaves, so you can't really expect them to behave like full tea leaves.

How much tea can you make from one teabag ?

This depends on how much water you're adding.

A bit of water will remain inside the teabag, along with the tea itself.

That amount is negligible, since it's only a few grams.

Steeping teabags more than once is possible, but not all of them are going to give you a good second cup of tea.

In cases of quality teabags, you might just get a second cup as good as it would be from loose leaves.

But most teabags are not good quality, so do not expect much from them.

So in short, you can make as much tea as you add water. And only use the teabag once, otherwise you'll be disappointed by the second cup.

How strong do you want your tea ?

This again depends on how much water you add.

Actually it's more the tea to water ratio, which is going to dictate how concentrated the tea is going to be.

Another thing that determines the final strength of the brew is how long you leave the teabag to steep.

Leaving it for one minute is going to give you a weaker tea, but you can then reuse the teabag a second time to get an equally weak second cup.

If you leave the teabag to steep for 5 minutes, it's going to be a strong tea and provide you with as much flavor as it's capable.

Diluting brewed tea with unbrewed hot water to get it to a weaker state somehow just doesn't work. I'm not sure what the reason is, but it doesn't taste very good.

I hope you're clear on how much water to use for one teabag.

I know these things can get a bit confusing sometimes, especially when you've got 5 tea boxes and each of them gives you different directions.

As such, I think trial an error is the key. Start from the baseline, and figure out how you want your tea, according to your tastes.

For example I know I prefer my tea made from teabags on the stronger side, so I sometimes leave them for 5 whole minutes.

« Can You Microwave Paper Coffee Cups ? Here's What You Should Know
Does White Tea Have Tannins ? Looking At The Most Delicate Tea »