Chai lattes are the newest latte variation, and everyone seems to be enjoying them. Spicy, milky and so creamy.

But is Chai latte coffee ? Does it contain any actual coffee or is it a knock-off latte ?

This is what we'll be figuring out today, and also what spices to use to make your very own Chai latte at home. 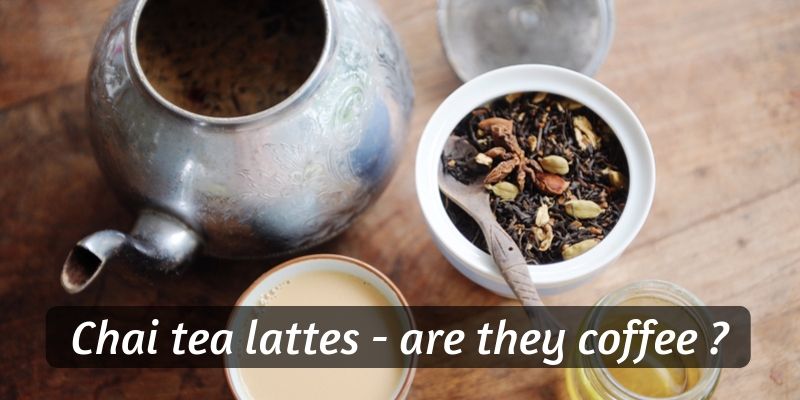 Chai latte is not coffee, despite the name. Chai latte is actually spiced black tea with lots of steamed milk added to it.

The 'latte' part comes form how similar it is to coffee latte, only it has a blend if black tea and spices used instead of espresso.

So Chai latte is made with Chai tea - a very concentrated form. Chai tea is just regular black tea, with a handful of spices added to it during the brewing process.

Exactly which spices are added varies from one coffee/tea establishment to another, but the most common ones are: cinnamon, ginger, nutmeg, clove, star anise, black pepper, cardamom. Other spices may be added or subtracted such as vanilla pods, mace, cumin, licorice, etc.

When ordering a Chai latte you're going to get a strong dose of black tea brewed with most of the above spices, and then several ounces of steamed and frothed milk are added to the tea. Everything topped with a nice layer of milk foam.

Does a Chai latte cave caffeine ?

Exactly how much caffeine remains to be seen. For example Starbucks claims their Chai latte has about 95 mg caffeine in a 16 fl oz/450 ml drink (1).

Research (2) has shown that there is a wide range for caffeine content in any tea type. Meaning any tea, be it black or green or white can range between 14 to 61 mg caffeine per serving (8 oz).

What does this mean for you ? Your Chai latte may contain more or less caffeine, depending on how strong the Chai tea was brewed, and how much of it was added to your order. 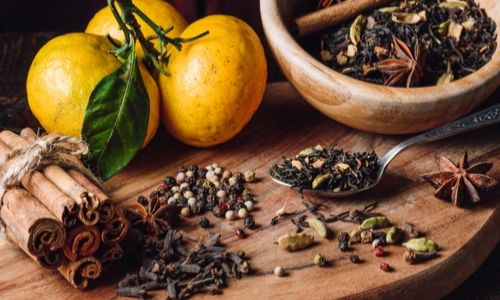 Is a Chai latte a good substitute for coffee ?

You could say Chai lattes are a good substitute for coffee, yes, but it depends on what you're trying to achieve.

If you're simply trying to cut back on caffeine and opt for a slightly healthier option, then yes, a Chai latte is better, it has less caffeine than a regular latte made with espresso shots.

This is because replacing coffee with black tea is actually a good idea for some folks, and it might benefit you as well.

Do keep in mind that a latte, any latte at all, is going to be sweetened and may contain some toppings. If you're watching calories then a latte might not be the best option.

In that case then a regular Chai might be a better idea, without as much sugar or milk added.

What usually goes into a Chai latte

Your Chai latte is so delicious because of the many spices it's made with. There's an entire list of spices that are usually used in Chai tea, and you'll find them in a Chai latte as well.

Other brands offer black tea already mixed with the spices, ready to brew, either in teabag form or loose leaf.

Whichever you use, you're going to get roughly the same end product, since the flavor profile is rather broad. 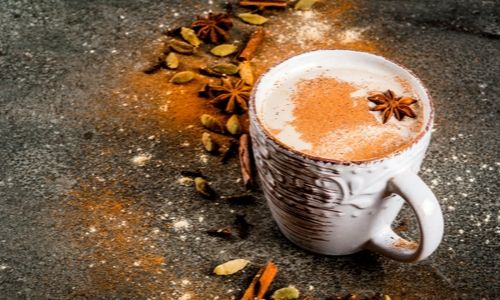 You can always order a dirty Chai latte

I know this sounds a little short, but really that's all there is to Chai latte: black tea, milk, and spices.

If you'd like a stronger kick on your Chai latte you can always order a dirty Chai latte. It might not sound like the most appealing drink, but really it's just regular Chai latte with a shot of espresso added.

Meaning your drink will change its flavor, and it won't be as milky/smooth as before since there are more bitter, earthy tones in it than before.

This will also raise the caffeine content, since a regular shot of espresso is usually around 67 mg of caffeine. And you can always as for a double dirty Chai latte, meaning you'll get two shots of espresso.

Sometimes you might find the potion of ordering a dirty Chai latte on the menu, and sometimes you'll have to just ask the barista for it. Most coffee shops can make it for you since they have all the ingredients on hand.

Make your own Chai latte at home

Or better yet, why not get both ? Now I've found 2 ways to make life easier when making Chai latte.

First, you can use teabags. Traditionally you'd use black tea leaves and crushed spices, steep them together and then strain them into your cup of tea.

But since most folks don't have the time for that, teabags will do the job just as well for a Chai latte.

A great pack of black tea with all the spices you need is this one from Twinings. It's black tea blended with cinnamon, cardamom, cloves, ginger and black pepper.

All of them are organic, including the black tea in the teabag.

This is a one-pack deal and it comes with 20 teabags, so you'd get 20 Chai lattes. Brewing instructions are simple enough, and can be found on the side of the tea pack.

Now, if you're brewing Chai lattes for a whole bunch of guests, or would just like to have your life made even simpler, then I've also found this Chai latte tea powder.

There's also a nice recipe on the back of the container for Chai latte so you're going to know exactly what to do the moment you get your hands on it.

The best thing about this is that you can make it as strong or light as you want, since this instant powder mix can be added as much or as little as you want. As opposed to teabags where you have 'set' servings.

Whether you love Chai lattes for the flavor or because they let you have less caffeine but still enjoy steamed milk, I hope this post was helpful for you.

Chai lattes aren't coffee, unless you make them dirty Chai lattes. And if you decide to make one of those at home, all you have to do is add a shot of espresso to the already brewed Chai.