Wondering if you should get a big glass of nitro coffee, or a nice cold brew ? I think we've all been there.

Just what are the differences between nitro coffee and regular cold brew ?

Do they even matter ?

How do you even decide between them ?

Hopefully this post will help you figure out the best coffee for your morning trip, since there are a few differences between these two cold coffees. So here they are. 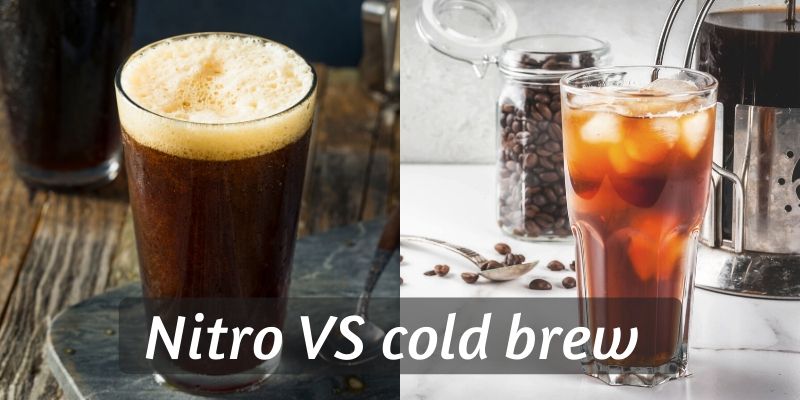 Both nitro and cold brew coffee are iced coffee, but the main difference is texture. Because of the millions of bubbles added by the nitrogen infusion, nitro brew becomes a creamy drink, while cold brew is much lighter.

Cold brew tends to be a bit more flavorful, while nitro isn't that easy to find just yet.

These differences and more are explained and explored in the article, so keep reading to understand all of them.

1. Nitro has a creamy, thick feel to it

If you're looking for mouthfeel and how the drink just feels, then you should know that nitro coffee is always, always going to have a thick foam that makes it creamy.

Much like how steamed milk becomes creamy when it also gets microfoam, for example in a flat white.

It might not all be cream from top to bottom, depending on how it was infused with Nitrogen, but at least a significant portion of it will be foamy.

Regular cold brew is the simple, fizz-free coffee we all know. It's not going to make any bubbles, and it's going to give you no trouble at all. It's the tamer of the two, you could say.

Also, you should note that cold brew often, if not always, comes with a side of ice to keep it as cool as possible. Nitro coffee, as far as I've noticed is ice-free.

If this is something you usually take into account, you've been informed.

2. Regular cold brew gives you more of a flavor experience

Now, if you're rather looking for flavor in your cup of coffee and don't care for the feel of it, then you might opt for regular cold brew.

This is because it's always going to give you that authentic coffee flavor. A little on the sweet side, just because it's much less bitter ad acidic than regular hot coffee.

People often say they can actually taste the origin of the coffee bean, or note the differences between one roast type and another when drinking cold brew.

So you're going to get a much clearer, cleaner taste with regular cold brew.

As for nitro, this one is said to be a little sweeter than cold brew since the millions of bubbles in the foam hit the tongue in so many ways, it kind of doesn't detect the bitterness or acidity.

This is a drink that rarely needs added sugar or cream/milk to make it taste better.

Oh you'll find nitro coffee with various flavors, no worries. It's just not as necessary as with other coffee types.

The downside to this is the actual taste of the foam itself. If you've ever had beer you know what I mean. The foam doesn't fully resemble the flavor of the actual beer, but only takes on certain notes.

Conversely, you'll notice that nitro taste a little different that regular coffee. Not bad, just different. So you might not get the flavor you were looking for, if you were after pure coffee taste. 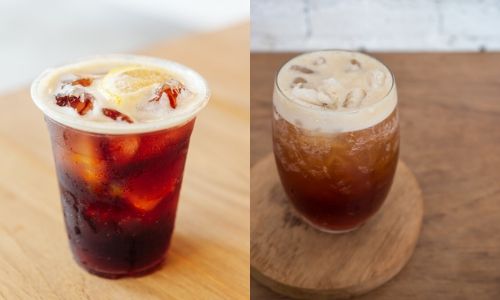 As a result of most cups of nitro coffee being mostly or completely foam, the recipe needed to be tweaked a little.

This is because the actual foam is actual coffee only to a certain degree, the rest is air bubbles.

So, the recipe for cold brew was altered to contain more caffeine. More coffee grounds are used when brewing for nitro coffee, and this results in an increase in total caffeine in the end product.

How much ? Well, the difference can be as big as a the equivalent of a whole espresso shot. It's no coincidence that the top rated Starbucks drinks are nitro cold brew, and the second best are regular cold brew.

So if you're looking for a lot of help in the morning, to get your gears going, then nitro might be the one for you.

Cold brew isn't too far behind, so even if you get that you're still getting way more caffeine than a latte or cappuccino or anything else from the coffee shop.

4. Regular cold brew is still easier to find than nitro

Despite nitro being something most folks are awake of, or have at least heard of in the past 2-3 years, it's not very common.

You might find it at Starbucks, yes, but even then it might not be present in just any of their stores.

As for smaller coffee chains or shops, the changes get much slimmer.

Meaning, if accessibility matters and you want to grab a coffee from the nearest possible place, you might wanna bet on regular cold brew. That's almost always on tap, and can be found pretty much anywhere.

Of course, if you live in one of the biggest cities on the planet than finding nitro coffee really won't be that much of a hassle.

In the end, they're kind of the same coffee

Now, you know the main differences between these two coffees and hopefully you know how to pick your favorite.

And you may have noticed that, aside from one being infused with Nitrogen and the other being plain, there really isn't much to say about how the differ in terms of actual coffee.

Deep down, we all know they're really the same cup of coffee. Nitro is often more impressive, and if you'd like to try it for the novelty of it, why not ?

After all, whichever you pick you're still getting the same thing: cold brewed coffee, with or without ice, and it may or may not be creamy.

Personally I think you should get them both, maybe when you're out with a friend and share them. Compare, see which one you like best so you can really pick your favorite from experience.

« What Is Nitro Coffee ? Here's The Basics You Need To Know
French Press VS Pour Over - 3 Differences, And Their Benefits »