Iced tea is a summer staple, and pretty much on everyone's mind whether they order it from a coffee shop or make it at home.

Even being such a common drink, some questions do arise. This is natural, and we're going to get to the bottom of the most common questions about iced tea.

Starting with exactly what this drink is. 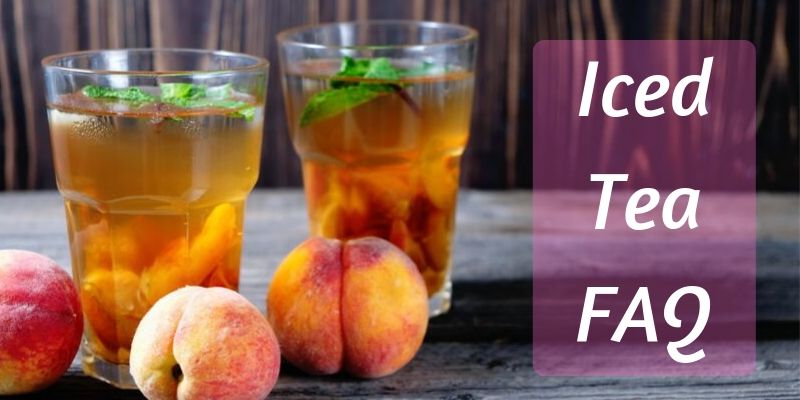 What is iced tea ?

Iced tea is a form of tea that was brewed cold to begin with, and then mixed with ice. It's almost always sweetened, especially if you order it from coffee shops, though extra sweeteners are available.

Hot brewed iced tea is not unheard of, but it's not the common way to make it.

Iced tea is made from many types of tea, but the most common tea to use for brewing is black tea. For those who are from North America, you'll notice your tea simply states 'tea' on the label, and not a specific type of tea.

This is because black tea is the most common tea, and is often simply known as tea.

So for example if you're having iced lemon tea, there's a high chance it's actually black tea with lemon in it, as opposed to pure lemon tea.

That being said, the varieties to be used in iced tea are as varied as there are teas in the world.

Though not all teas work great as iced tea, all can be made into iced tea.Fruity teas are especially great for iced tea, as is black tea and green tea.

Is iced tea sweet tea ? What about sun tea ?

This is practically a difference between North and South in the U.S.A. since one side says iced tea (the North), while the other says sweet tea (the South).

The item is exactly the same, since it's cold brewed tea that's served with ice, and is usually sweetened.

As for sun tea, that's the old name for cold brewed tea. Some folks still brew it today, and it's really nothing but tea brewed in a glass pitcher, by leaving it in the sun for several hours.

The sun heats it up a little, which helps extract the flavor a little faster. It's the faster sibling of regular cold brewed tea, except you have to actually leave the pitcher in the sun (cover the top) and leave it there for as long as the sun is out.

After brewing, sun tea needs to stay in the fridge otherwise it won't keep.

Iced tea, sweet tea, and sun tea are all the same tea, though there might be very tiny differences if you brew one in the sun and another in the fridge. But the end result is the same. 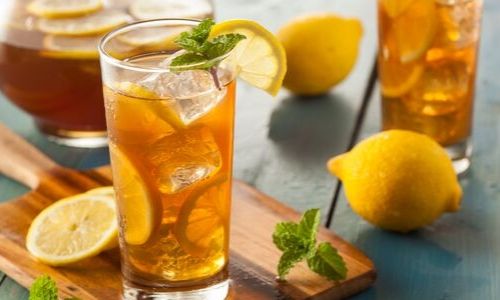 How to make iced tea at home (short recipe)

I'll give you a short recipe for iced tea. It's very simply to make at home, and there's no real cooking involved.

But, you have to be patient and remember to do it the night before, otherwise it won't be ready to drink the next day.

Alright, that's the short version. It's best if you use a dedicated cold brew jar like this one from Amazon for making iced tea, or one with a spout at the bottom to make your life even easier.

This will yield a medium strength tea, since cold brewing will draw out flavor differently and it will be a bit weaker (than hot tea) by default.

After mixing the water and the tea leaves in the jar, all you have to do is cover it up. Then, leave it somewhere you know nothing or no one will knock it over or mes with it.

If you want, you cam brew it in the fridge and let it sit for as long as 16 hours. Honestly anything past 16 hours isn't really necessary, but if your schedule is such that you can't pull the tea out after 16 hours then 24 will work too.

Just don't leave it brewing for more than 24, since it might just turn icky.

Once the tea's done brewing, strain it or remove the strainer/filter if it had one incorporated like the dedicated cold brew jars.

And you're done ! Mix it with some sugar or simple syrup, add ice, and give it a stir. It's done and ready to drink.

Can you make iced tea with teabags ?

Yes, you can make iced tea with teabags. Some tea companies have made teabags specifically for cold brewing, to aid the speed and flavor.

But if you've got regular tea bags, don't fret. You can still use them, just know that you might need to use more teabags.

The thing is teabags are lower quality than loose leaves.

Meaning a teaspoon of loose tea leaves is about as good as 1.5-2 teabags. depending on how weak the teabag is.

Just to be on the safe side, measure out the amount of water you need, and divide it by 6 (ounces). That's the amount of teaspoons of tea leaves you'd need.

The for every 2 teaspoons calculate with 3 teabags.

So if you end up needing 20 teaspoons, you'd need 30 teabags to substitute the leaves. 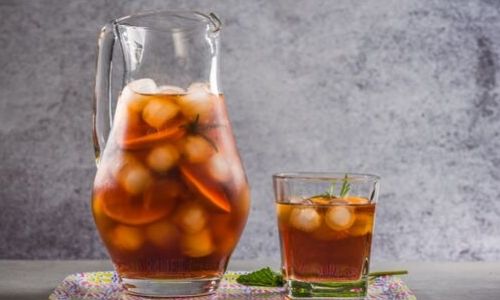 Does iced tea have calories ?

If your iced tea is sweetened in any day then yes, it does have calories.

The trouble is that almost always iced tea ends up being sweetened, whether you ask for it or not. It's the default setting for nearly any coffee shop that offers iced tea, and the amount of sugar or sweeteners they use per ounce should be noted somewhere easy to see.

Or, if you can't see the label then ask the barista about the sugar content.

So for example if you're buying a 12 oz/354 ml iced tea, and it's sweetened with about 3 teaspoons of sugar (or the equivalent) then the drink has about 60 calories.

One teaspoon of plain white sugar is 20 calories, and 5 grams of carbs. A teaspoon of sugar for every 4 oz/120 ml of tea is a regular occurrence, so I'm using that to figure out the calories.

However if your iced tea is not sweetened, at all, then there are no calories to speak of. No carbohydrates or sugars to up the calorie count.

If completely unsweetened iced tea sounds like too much (or too little) then you might want to check out my article on teas that go well without sugar, or the one on how to sweeten tea without sugar, for a healthier alternative.

Yes, iced tea can go bad if you forget about it for a few days.

The fact that it's iced will make the bacteria to move much more slowly, but it will still do its job. The composition of the tea will break down, as is normal.

If your tea is already sweetened, then it might go bad faster but you won't really taste it due to the sweetness.

As for how quickly iced tea goes bad, here's a rough estimate:

Does iced tea have caffeine ?

Sometimes iced tea can have caffeine, it depends on what it's made of.

If the base of your iced tea is any sort of tea made from the Camellia sinensis plant - so black tea, green tea, white tea, Oolong , Matcha or Pu'erh then it will contain some amount of caffeine.

As is the case, most of the time iced tea is made using a black tea base, with fruits or flavorings added.

If your iced tea is completely fruit based, or is a herbal tea then it won't have any caffeine, unless it was artificially added. If it was added, it should be stated on the drink label.

Read the menu closely or ask the barista if you're unsure. 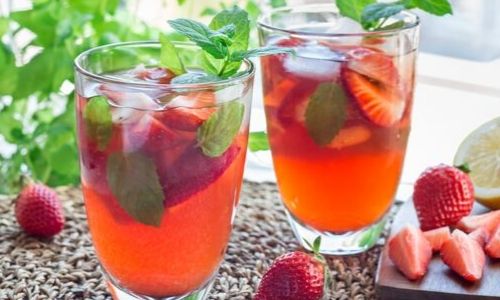 If your iced tea has no caffeine, then yes it could count towards your water intake.

It won't count as much as pure water, but it's definitely better than an iced latte.

If your iced tea does have caffeine (most of the time it does) then it won't really count. This is because caffeine has a diuretic effect on the body, meaning you'll be making extra trips to the bathroom.

Which will dehydrate you, leading to potentially more water lost than gained.

And if the iced tea is also sweetened, it's not helping too much either since part of the drink will be simple syrup, and not water.

Why does iced tea get cloudy ?

Iced tea, or any tea in fact, can get cloudy due to what it was made from.

For example if you've got iced tea made from something with lots of powdery ingredients (like ground cinnamon, ground ginger, cardamom, and so on) then your tea might get a little cloudy until all those articles settle on the bottom of the cup.

Another possibility is if you've got iced tea made from a tea containing anything caramel or milky. It will break apart in the tea very slowly, leading to a cloudy appearance.

Finally, another reason iced tea might get cloudy is if it's got honey or maple syrup or another such (thick) sweetener mixed into it. When breaking apart those sweeteners might make the tea cloudy but they're still safe to drink.

If you're worried about the cloudiness, don't be. You tea is fine, unless you know that tea very well and know it's always been a clear tea. 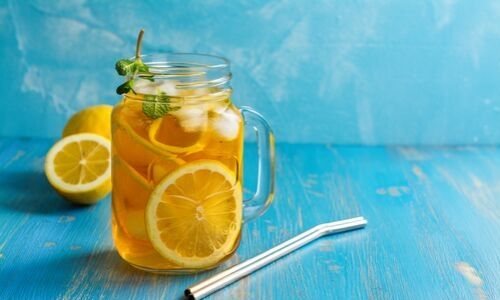 Why does iced tea foam ?

Iced tea may sometimes have a thin film of foam. It's usually from the drink being mixed and shaken with the ice before being served, and it might even be present for a few minutes.

It's not something to worry about.

Sometimes, with hot tea for example if the water isn't extra hot, the dissolving sugar will make a sort of foam on top and it might be something similar to that.

If your iced tea was brewed hot and then iced to cool it down, then the foam present might be due to the fact that the tea wasn't hot enough when it was steeping.

Iced tea is amazing in its own way, and a really great treat all throughout summer.

I hope this FAQ post helped you figure out why your iced tea is the way it is. And who knows, you might just make your own iced tea, right in the comfort of your own home.

You can make i any flavor you want, and add whatever you think will be great in it. Don't forget the ice !

« What Is Matcha Latte - All About The Famous Green Latte
Adding Milk To Tea - The What, How, And When Of Milk Tea »