When drinking tea you might be tempted to add sugar, to make it more palatable or simply out of habit. But what about sweetening tea without sugar ?

What can we use for this ? If you're worried about carbohydrates, diabetes, or just want to steer clear of overly sweet drinks, then this article can help you out. We're not touching anything sweet here. 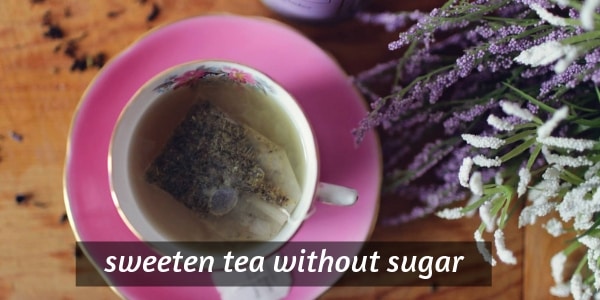 Adding any kind of sweetener is not on this list

If you mean to sweeten your tea with something other than sugar, and then proceed to add honey or honeycomb to your tea, you've done yourself a big no-no.

When you're in a position where you're not meant to consume sugar, then several things are off the list as well.

Honey is off that list, since it is just as sweet and sugary as actual sugar. Produced differently, yes, and with loads of antioxidants and vitamins, but still a carbohydrate.

Agave syrup, maple syrup, fructose, corn syrup, coconut sugar, or chemical sweeteners won't be touched in this article. Even if they claim to be for diabetics. Best to play it safe and steer clear of anything sweet, at all.

The options you'll find in this article will not actively sweeten your drink, but rather give it a sweet aftertaste. If you were to suck in air after a sip of these drinks, it would come in sweet.

Often the regular teas are a bit bitter or acidic on their own, and need a little sweetening to become drinkable for most people. The problem is that we tend to go overboard with this.

So let's see how we can sweeten our tea without sugar, using only natural ingredients.

1. Add a stick of cinnamon to the brew to sweeten it

Cinnamon is a wonderful thing to have around the house. It's also a bit more expensive if you get a quality one. No cinnamon is produces in the Western world.

Cinnamon is actually the bark of a tree that grows in specific parts of Asia, and it's harvested every year and shipped around the world.

The closer your get to Asia, the fresher and stronger your cinnamon will be, because it hasn't had time to start to lose its power.

This means that if you're in actual Asia, like maybe Indonesia, you'd be getting the freshest cinnamon possible. So it's worth the splurge to get yourself some high-quality, fresh cinnamon sticks.

You can add a whole stick to your tea to give it a beautiful aftertaste, though you'll notice it even as you drink your tea. Do be careful with how much cinnamon you add to your tea because it can get spicy, much like a large piece of ginger.

Of course, you can always just use ground cinnamon. But here too you should remember two things.

Cinnamon is the bark of a tree, this means it will not dissolve in water, no matter how much you try. This means you will need to use an empty tea bag to infuse the cinnamon flavor into your tea, unless you're okay with it floating to the bottom.

It's much like trying to use cinnamon in coffee. It will not dissolve, so unless you want to use the cinnamon sticks whole, you're going to need to break them apart, crush them, and use an empty tea bag or tea ball to infuse the cinnamon.

Once you do find a way to use cinnamon in your tea successfully, you should know that it blends very well with some specific teas.

For example black teas take wonderfully to cinnamon, and adding a dash of milk will make it a very wonderful drink. Any other tea might be a little odd with cinnamon, unless you happen to be a big fan of that combination.

Cocoa shells are what's left of the cocoa seeds after they've been pressed and the cocoa butter has been removed. They are then dried, and ground up into what we know as cocoa powder.

So there you go, if you add a bit of cocoa powder you can get a great aftertaste from your drink. Do keep in mind that cocoa powder, if you buy the pre-made kind, is ridiculously powdery.

It will not dissolve in your drink either, but it will impart its flavor when you steep it.

Again, using an empty tea bag here is a very smart option. Add the cocoa powder to your tea bag, and let it steep along with your usual tea. There might be some very fine cocoa particles that will slip through the tea bag, but those will be very small.

If you have access to cocoa shells of your own, make sure you grind them in a larger size than cocoa powder. This will make steeping much easier, and they won't escape through the tea bag. 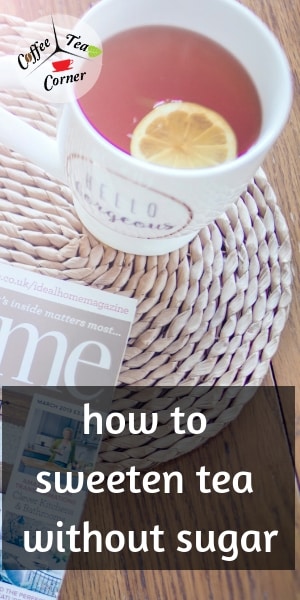 3. Add honeysuckle flowers to your brew to sweeten the drink

Honeysuckle's long been known to be a wonderful sweet flower. It grows pretty much everywhere nowadays, and they do create a sweet aftertaste in your tea.

This was the main reason we looked for these flowers when we were kids, and why you will sometimes find bees or other insects drawn to the flower.

You can add as many as you want, and play around with the quantity until you're happy with it.

Honeysuckle will go with pretty much any kind of tea, be it herbal, green, black, or rooibos, or any other tea I might've forgotten here.

All we've discussed so far was hot tea. The cinnamon, cocoa, and honeysuckle work best when used in hot tea. Although honeysuckle could possibly work in iced tea as well, I haven't tried it like that yet.

The thing with strawberries is that they're so perfumed and sweet smelling that they'll instantly lift and sweeten any drink.

Even if there is no sugar added, strawberries still manage to leave a sweet aftertaste.

This is very much lost in a hot tea, since this kind of taste is very heat sensitive. It won't evaporate as easily, but it comes out much nicer if the drink is cold, or even iced.

If you were to eat warm strawberries, you'd get them a bit tangy and sour, which isn't how they're meant to be. So making yourself a nice, cold pitcher if iced tea, and adding several sliced strawberries will boots things immensely.

They will give a nice color to your drink as well, and also look amazing on their own in the drink.

What about other forest fruits, you say ? Well, here is where the strawberry-is-not-a-berry thing comes into play. Berries, which is what forest fruits are, are more acidic in their nature and aren't naturally sweet.

Rather they're wonderful to pair with something heavy and fatty, like a good cheese, or some crisp good breast. Their aroma and acidity will cut right through those foods.

In a tea, warm or iced, it will sit weirdly on the sides of your tongue, much like a lemon. So you will need to use sugar, and we're right back where we started.

So stick with strawberries, and you should be fine.

Another option is the wonderful vanilla pod. Steeping vanilla pods will add some wonderful flavor to your tea, and give it a sweet aftertaste as well.

Vanilla has been long known as a staple of sweeteners, and sweet foods in general. It goes well with many things, and this includes many tea types as well.

It's just that some might be to your fancy, while others aren't.

For example vanilla in a black tea can give a wonderful aroma and mellow out the malt of the robust black tea. But if you were to add this creamy, flowy aroma to a sharp, delicate green tea they would not mix very well.

Maybe some would like the combination, I know for me it would be too much.

If you were to make a bedtime tea, with elderflower and melissa, then a pod of vanilla will go great with those two herbs.

It all depends on whether you like the vanilla in your drink or not. It can be very strong, and it goes better with hot teas rather than iced teas.

Vanilla pods can be a bit expensive, but one pod can flavor a whole pot of tea, so you won't need many.

Opt for a tea that doesn't need sugar

Alright, we've covered some very natural ways of adding some sweetness to your cup of tea. And none of them involved actual sugar or sugar substitutes.

But how about starting with teas that are already sweet on their own, or taste great even without sugar ?

It would make things much, much easier and  the need for sugar less pronounced.

For example rooibos tea is a sort of herbal tea, hailing from South Africa. It's the kind of tea that has a sweet aroma by itself, resembling caramel and it's a very smooth tea.

Adding just a splash of milk and a bit of cocoa or vanilla to the cup will make it a hit with anyone.

Many green teas that are blended with flowers are actually great without sugar, and some oolongs as well. You'll have to look around and try out several tea types.

You won't know which tea your might like more, unless you actually try it. I came a long way from drinking only herbal teas in high school, to the wide variety of fruity, green, and black tea I have at home now, many years later.

When it comes to sugar, and sweetening tea, we're kind of doing tea a disservice. Tea is wonderful on its own, with no sugar added. Some teas are better with sugar for many people, like black tea for example.

But even there a Darjeeling first flush might prove delicate enough to be enjoyed on its own.

I hope you found some definite answers to what you were looking for in this article. Sweetening tea with things that aren't sweet on their own isn't an easy task, so these 5 ingredients will help you out.

I've added cinnamon to many black teas before, especially the very spicy ones that contain cardamom, cloves, and ginger. I feel like cinnamon just rounds things off and makes the whole experience more pleasant.

« No Sugar In Your Tea ? 5 Teas That Taste Great Without Sugar
5 Natural Coffee Sweeteners - Keeping Your Coffee On The Healthy Side »