Home » Tea facts » Where Is Chai Tea From ? The Origin Of Masala Chai

Chai is one of those wonderful types of tea that warms you up from the inside and makes everything feel better.

It's also one of the most ancient and well known recipes for spiced tea in the world.

It comes from an an ancient Indian medicine practice, and over the centuries has established a true presence in the Western world.

But exactly where does Chai come from, and what else can we learn from its origin story ? Let's take a deeper look. 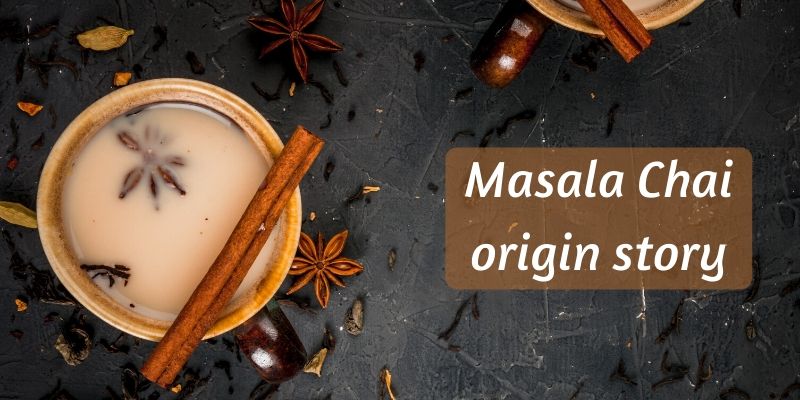 The geographical origin of Chai

Originally Chai is from the Indian subcontinent.

They can all be found in one recipe, or partially. Each family has their own recipe on how to make Chai.

It came about thousands of years ago, back when the countries we know today weren't even there. They had different borders, different names, though they may resemble their modern version.

The original version of Chai was actually Masala Chai - meaning spiced tea. And there was a particular blend of spices used back then, and it's largely the same today.

Most of what people know about Chai today come from two sources: Ayurvedic medicine, and tales and recipes passed down through generations, usually on the female side of the family.

The whole point of Chai was to help remedy general health issues (bad stomach, headache, insomnia, fatigue, etc) and not to be pleasant. So it was a sort of medicine.

More on that later in the article, when we cover the Ayurvedic roots of Masala Chai.

Seeing as the Indian subcontinent is large and encompasses many countries, we should make things clearer.

India, Bangladesh, Pakistan, Nepal, Sri Lanka, Maldives and Bhutan are the countries, and in the beginning there was little difference between them, thousands of years ago.

This can be seen in the way Chai is prepared in some regions. For example in the Kashmir region of Pakistan Chai is made using green tea instead of black.

In other regions the usual spice combination may be very different from the Indian version.

The point is that each region has its own twist on the way Chai is made.

Another thing to note is that the spices generally used in Chai come from the Indian subcontinent as well, and grow there naturally.

For example turmeric, ginger, clove, cinnamon have been part of the cuisine and lifestyle of those living in the subcontinent ever since they could remember. 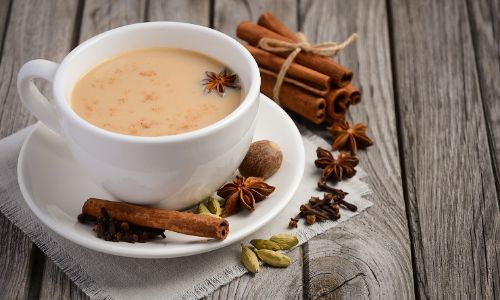 The British changed everything with black tea

The original version of Chai was very close to its original name - spiced tea.

In that there was no actual tea used, but rather the spices were steeped in hot water, and the resulting brew was considered medicine.

Later on, milk became an important part of Chai, making it smoother but also adding its own health benefits. Remember, this was medicine back then.

Once the British discovered India, they saw an opportunity to challenge the Chinese monopoly on the tea market. At the time the Chinese were the main source of black tea, and the Brits wouldn't have it.

So the East India Trade Company offered anyone, anyone at all, land in the Assam region of India. The only caveat was that they had to grow black tea on that land, farm it, and hand it over to the Company.

This scheme was very successful, and EITC became a well known black tea source as well.

If you're wondering what this has to do with Chai, note that most folks working the fields on the tea farms were Indians.

They slowly started incorporating black tea into their Chai recipes. Not too much, because tea was very expensive.

But sometime in the early 1900's tea vendors started adding more and more milk and spices to their Chai, which made it less expensive.

Soon after a new way of processing the tea leaves (Crush Tear Curl or CTC) came about, leading to much faster tea productions. Tea prices went down, but the quality was a little lacking as well.

Still, CTC black tea became a staple of Indian kitchens and Masala Chai was one of its chief uses.

So there you have it. You can thank the British for modern day Chai, otherwise it might've had a different form.

Chai in the Western world

It's also the Brits who are responsible for bringing Chai into the West.

Not just black tea, but Chai itself. Many Indian immigrants blended into British society and over time Chai became a thing.

Soon after, the Americans started drinking Chai as well, but to a much lesser degree.

The spread of Chai into modern day coffee houses was an inconspicuous one, but it's there today, in all its glory.

Most folks love the combination between the warming spices and delicious milk, while the black tea offers a good earthy base.

That being said, the way Chai is served in many establishments isn't very true to the original version.

In America for example most Chai is made using a Chai concentrate, syrup, or powder. Sometimes it can be found in the form of teabags, and rarely as loose leaf tea mixed with spices.

Though you may find some coffee shops that offer Chai made from scratch, the above is the norm. 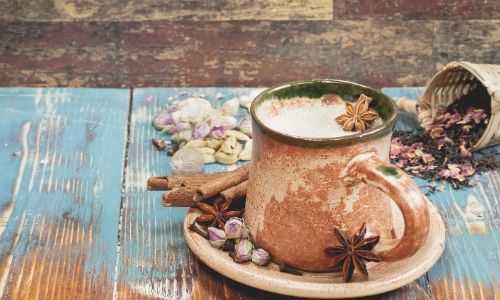 Be wary of Chai lattes

Another interesting point is the Chai lattes.

Chai has become a sort of treat in the West, partly because it seems exotic but also reminds folks of autumn and spiced apple pie or various baked goods.

Thus, the Chai latte is a form of Pumpkin Spice Latte. Folks love it for the spices, rather than the overall drink experience.

Also important to note here is that Chai lattes are not true Chais.

It might sound like a very tea snob thing to say, and maybe I am. But Chai isn't meant to have that amount of milk in it. And There's also a big difference between the Chai concentrates and the loose leaf Chai you can make at home.

So in short, if you've never had Chai and want to get one because you're curious, don't get a latte.

Go out and find a good coffee or tea shop that offers the real deal, or as close to it as they can get.

Alright, let's talk a little about the spice mix, because this matters so, so much.

Note that whichever way you mix the spices you still get Masala Chai (mixed spice tea).

However the proportions of each ingredient and whether they're added or not will really define the Chai.

So let's talk about the name for a moment.

The full name is Masala Chai, which is Hindu for 'mixed spice tea'.

If you've ever been in the spices section of the supermarket, you may have seen a 'Garam Masala' of curry here or there. All that is is mixed spices, according to the recipe of the Garam region in India.

So you'll find the word Masala on several spice blends, because it means spice blend/spice mix.

As for Chai, the word itself means tea. It's derived from the Chinese 'cha', and calling Chai tea translates to 'tea tea'.

But Chai has very deep roots in Indian culture and cuisine, so let's explore that a little bit as well. 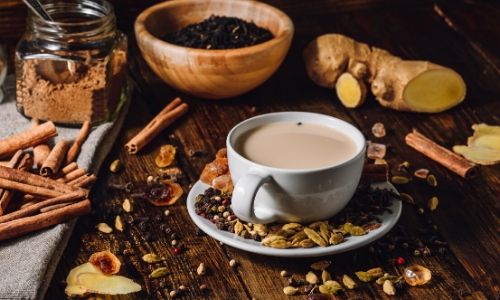 Ayurveda is the ancient Indian practice of medicine.

In very short and simplified terms, one of the main gods (Dhanvantari to be exact) decided to walk among the mortals one day. He made himself an avatar/incarnation as the king of Varanasi.

Thus he began to teach medicine to any sage who would listen, and one of them wrote the teachings in a book.

Ayurvedic medicine is thousands of years old, and has many home remedies for common and severe ailments.

The emphasis on spices and plants is very strong, and the main ingredients of Chai were derived from Ayurvedic texts.

The original version of Masala Chai was meant to be medicine, and nothing else. It was not meant to be pleasing but useful.

It was the spices themselves that got people to really like this type of remedy, and it's one of the remedies that have stuck around since ancient times.

Often it's the grandma of the house that prepares Chai for those in need of some help to get through the cold and rainy season.

If you take a look through your pantry you probably already have most of the spices necessary for Masala Chai.

If you're missing some of them, don't worry. As long as you've got 3-4 to work with you're good to go.

The most common combination is cardamom, black pepper, and cinnamon.

If you have no black tea on hand, a plain box of black tea (teabags) will do the job well enough.

The flavor will be a little strong, since those are most probably CTC tea leaves, but the spices and milk will cover everything up nicely.

Also, if you're not into whole milk, any milk will do. The higher the fat percentage, the better it will mix with the black tea and spices but skinny will do fine too.

Plant milk is fine too, though it will provide a different flavor.

One thing I like to do is to add both coconut milk and cow milk, just to add an extra flavor. 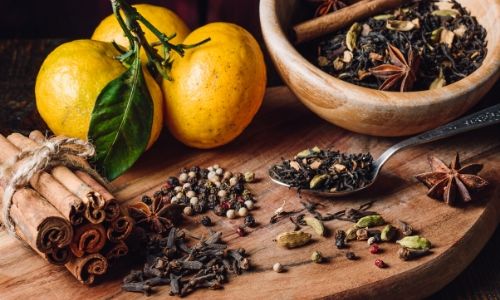 Making your own Chai

You can totally make your own Masala Chai, as long as you have the ingredients we discussed before.

So in the small pot add as much cold water as you normally would for a single cup of tea.

Bring water to a boil, and throw in the spices. Let them simmer for a minute or two, those take longer.

Turn the heat off, and let the mix stand for 2-3 minutes. This will cool the water a little. It's important to let it cool a little before adding the tea, otherwise it can become bitter.

When ready, add the tea. If using loose leaves I recommend 2 heaping teaspoons for 8 oz/230 ml of water.

Once the tea is in the water, let brew for exactly 3 minutes. No nor, or it will get bitter. yes, black tea is sensitive and especially so if using loose leaf.

When the time is up, strain the drink into your tea cup/mug.

Add sweetener as you like, though keep in mind that the milk will make it a little sweet too.

Add milk as well, and stir. You're done !

Masala Chai is an amazing drink, and its origin story is really something worth exploring.

The best stories come from those of Indian descent, since their families have a much clearer memory of what Masala Chai truly is.