Adding milk to tea is a custom as old as anyone can remember, and being so old, no one really knows how or why it started.

It's one of those habits Brits grow up with without even really thinking about it, and nearly everyone else around them picked up as well, but maybe not as intensely.

Still, milk tea is the standard for many, and it's got merits of its own. 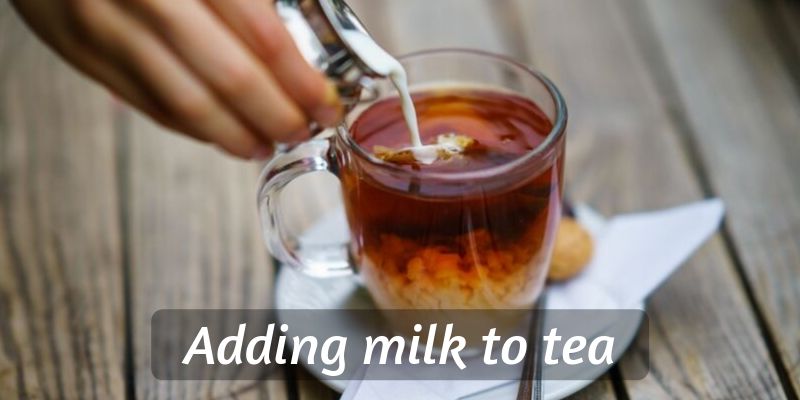 Why do we add milk to tea ?

The true reason for adding milk to tea is kind of lost to time. No one really remembers, and no one really thought to write it down somewhere for future references.

All we have to work with are educated guesses, and bits and pieces of stories.

Some say that back when the British first discovered tea, they dealt heavily with the Chinese, and they also imported their famous thin porcelain.

So thin and delicate, that the cups could not stand the high heat of tea and would crack after a few minutes. So, adding cold milk to the tea cups first would also cool down the tea when it was poured into the milk, thus saving the delicate cups.

Honestly this sounds half true, but then again the Chinese were already drinking hot tea from their own porcelain cups. Which weren't breaking.

And porcelain requires some serious curing in ovens and then glazing and more curing before being fit for use. So I doubt heat was the problem here.

Another story claims that one lord or another was visiting a Chinese ambassador, centuries ago, and first stumbled upon milk tea at that party.

Whether that's true or not, I don't know, but it sounds like a good opening to the founding story of a company or another.

The past is murky regarding milk tea. We can figure out today that they were most probably just brewing the tea wrong, and it often came out bitter, and thus needed something to take the edge off, like milk.

Can you put milk in any tea ?

Not all teas take milk. Some teas are too acidic, tart, fruity, grassy, or just plain astringent to really go well with milk and still retain their flavor.

Other teas go with milk because they have an earthy tone, more towards caramel, pralines, vanilla, and spice than anything else.

The main tea types that go well with milk are:

I would advise against trying to add milk to any other tea than what I mentioned. Aside from rooibos tea, herbal teas tent to be too vegetal or flowery and 'thin' tasting to really go well with milk.

Any other true tea is not meant to go with milk either.

Green tea is too grassy for milk, and is meant to deliver that astringent, grape-like flavor.

Matcha is meant to be a small serving of pure, bright green both in color and flavor.

White tea is too delicate and whimsy to add milk to, you'd lose the tea's flavor.

Oolong and Pu'erh are both too much of a crafted tea to ruin their flavors with a bit of milk. Best to leave those two as their tea masters intended them. 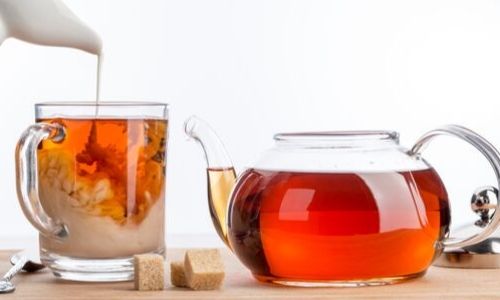 What milk to add to tea ?

What kind of milk you add to your tea is up to you, be it vegan or not. But there are so many options out there you're bound to find something you like.

I am very fond of whole milk. I think it's got the best flavor, but it's also not for everyone. After all, it came out of an animal so it's bound to taste and smell a little.

But if that's too much for you, then the next best thing is 2%. It seems to have the best balance between creaminess and flavor.

If you'd rather use a plant based milk, then things get a little more interesting.

Coconut milk, rice milk, and almond milk have that very savory flavor that makes them a great pairing for any, and I mean any tea out there.

I especially like coconut milk with flavored black tea, since it seems to just blend together beautifully.

If you'd rather use a creamier milk, then cashew milk is the way to go. Either full or part cashew, it's going to get a bit thicker than other milk types.

One thing to remember with milk, especially if using dairy: add the tiniest hint of salt. It will bring out the buttery tones in the fats, and make your milk tea all the better.

How do you add milk to tea ?

Adding milk to tea might sound straightforward, but it's got a little trick you need to know of. I didn't really know it until a few years ago when I really got into tea and had to do a lot of research.

Should you add milk before tea ?

Adding milk before the tea will somehow make the whole drink blend together much better. I'm not entirely sure of the physics behind this process, but tea seems to have an easier time smoothly dissolving into milk, than the other way around.

I first noticed this with coffee, and if you try it with tea you'll know what I mean.

If you add the milk last, you'll notice it billowing in beautiful fluffy clouds in the tea, but will still have to mix it with a spoon.

Whereas if you add the hot tea to the milk, it manages to thin it out, in a way. This leads to better mixing, and nearly no need for mixing with a spoon.

This might all sound pedantic, but it's little details like these that separate the casuals from the die-hard fans. It's not a life changing revelation, but for some it might mean a whole lot, so you're welcome.

Should you add cold or warm milk ?

The logical following question is whether the milk should be cold or warm. Well folks, there's a pro and con to both sides.

We're going to work with the assumption that you've come over to the milk-first side.

If your cup has cold milk - let's say as cold as the fridge - then pouring hot tea might just make it the temperature you want. It may or may not be harder to dissolve the sugar.

A con is that the milk won't have that yummy, warm milk flavor. As you know, heated milk seems to get an extra layer of flavor that makes it just melt in your mouth.

And since this matters, I think it's a con worth keeping in mind.

If you add warm milk first, you get that yummy flavor, but might have to wait longer for your tea to cool off. That's about the only con I could find.

It depends on how much you care for the extra milk flavor, and how hot you really like your drink.

I tend to drink mine nearly scalding, so I vote for adding warm milk.

Warm, not hot ! Adding hot milk might result in more chances of burning the milk, and you only need a little at a time so there's no point in putting it on the stove. For this small amount, you can use the microwave for a 3-5 seconds. 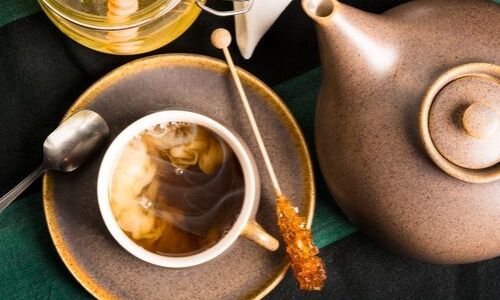 How much milk should you add to tea ?

The ratio of milk to hot tea isn't a set thing. It depends very much on what you're trying to achieve.

For example if you're going for a very creamy cup of tea, then you can go as far as 1:1 milk to tea. It's going to be less strong than a regular cup of tea, and will look very pale in color due to the high milk content.

The flavor should be very milky, and the tea subdued.

On the other end of the spectrum we've got barely any milk, or what most folks refer to as a splash of milk. The splash comes from the amount of milk that comes out if you tip the carton over and pull it back up right away.

This lets the tea shine through more, and offers a less creamy flavor.

I like to take my tea with as little milk as possible, but still cut down on the tea's bitterness or harshness whenever necessary.

I never measured it, but I usually leave the last half inch of the tea mug empty, so it can take milk.

If you want the flavor of milk but without thinning out the tea or cooling it down you can always add powdered milk.

When is the best time to add milk to tea ?

Adding milk at any other point than after the tea is already brewed is not a good idea.

If you were to add the milk while the tea is steeping, you'd mess things up pretty bad.

First by lowering the overall temperature of the drink, which would lead to a poor steeping and a poor cup of tea.

Second through the fact that the milk won't really allow the tea to steep properly due to its thickness.

So only add milk to already brewed tea. Actually add the milk to the empty cup before you add the brewed tea.

Can you steep tea in milk ?

No, you should not steep tea in milk. There are a few criteria that need to be in place in order for tea to be properly steeped.

First, the liquid must be hot, as hot as 90 C/194 F. Water is fine with this, but milk begins to change its properties a bit, leading to a poor performance in terms of drawing out flavor.

Second, the liquid must be 'blank'. For example water is very bland, basic containing nothing. No extra proteins, fibers, and other molecules that might make steeping difficult.

Milk on the other hand is chock-full of vitamins, minerals, fats and proteins that simply do not leave much room for the molecules that come out of the tea leaves.

So in short, milk to too dense to allow steeping to really happen.

I know it might sound like a quicker way to brew tea. Just chuck the teabag into the milk and you're done. But it doesn't work that way if you want actual, real tea.

Milk in tea is great it its own way, but who even knew it came with its own set of rules, right ?

After you've read through them I think you can add milk like a pro now.

« What Is Iced Tea ? A Quick FAQ On Iced Tea
Coffee With Honey - Health Benefits, And How To Make It »