In the tea world you're going to find all kinds of tea, including Rooibos tea. You might also know it under the name of red tea, though there might be some confusion in the East regarding that. I'll touch on that as well.

This post is meant to give you the basics on Rooibos tea, where it comes from, what it tastes like, how to brew it, and so on. If you can ask it, it's probably in this post. 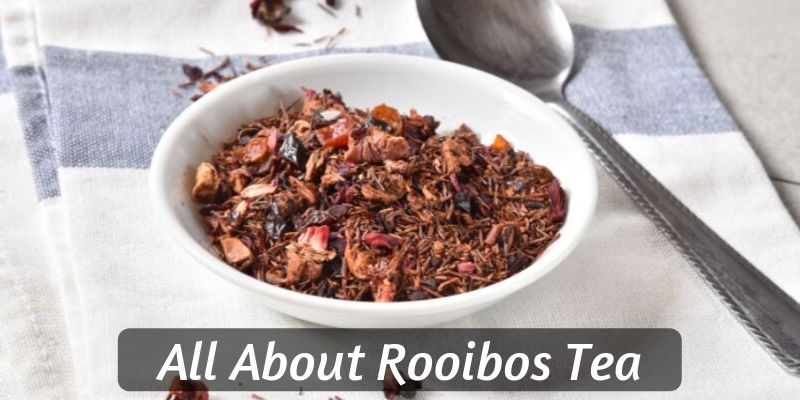 Rooibos tea is a herbal tea, and it's very different from any other tea out there. It comes from a South African bush called Rooibos (Red Bush in Afrikaans), and most often you'll find it in sleep enhancing teas.

It looks like tiny pine needles, only much softer and it's initially green. After harvesting it goes through an oxidation process that turns it dark orange, and this makes the resulting brew dark orange/red as well.

It's one of the most pleasant teas you'll find, since it tastes great on its own but also if you mix it with other flavors.

Rooibos tea is fairly common in the West, where it's alternately known as red tea and Rooibos. In Asia it's known just as Rooibos, since there the red tea is actually the Western black tea.

2. Where does Rooibos tea come from ?

Rooibos tea comes from South Africa, since that's where the Red Bush grows. It's the only place that can sustain the plant's growth, and the bush is indigenous to the area.

To be more specific, the bushes usually grow in the Cederberg mountain area, near Western Cape province. It's a wild and mainly untamed land, and Rooibos has been growing there for a long time.

It's not a very old tea, at least it hasn't been introduced to Westerners since only a few decades ago, as opposed to green and black tea.

But for the South Africans it's a well known tea, as much as herbal teas are well known throughout Europe.

Rooibos growing and being processed in South Africa means it has to be imported, which will usually raise the price on this kind of product. Luckily it grows in large amounts, so it's not exactly scarce, so not overpriced.

It's really one of the reasons it's so well liked, and why you find it in many sleepy time teas. The beautiful flavor makes you want to continue drinking the tea, and also relaxes the body and the mind. Much like lavender actually, since it's a very soothing taste and smell.

In my opinion the best Rooibos tea is the one mixed in with a bit of caramel bits, and then with a tiny drop of milk added for extra creaminess.

If you're looking for a Rooibos tea that's going to show you its purest flavor, then you'll probably want this Red Espresso Rooibos.

It's not actual espresso, but you can use it to replace your espresso with a caffeine-free alternative. It does not brew like espresso, meaning you should allow it those 5 minutes to steep.

I suggest you brew your first cup plain, with just Rooibos. Take a couple sips, see how you like it. Then, try adding a few drops of milk.

Then, brew the next one with a cinnamon stick in the tea water, or throw in some cardamom pods. Mix it up a little, you're bound to like it. 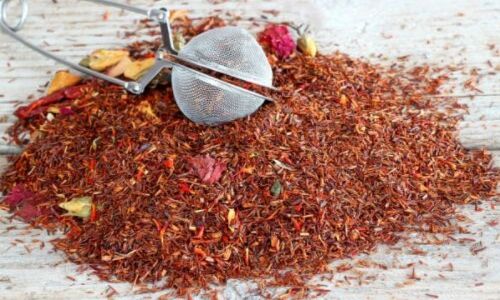 Rooibos tea is made by harvesting leaves from the Red Bush. The leaves are small, thin, and needle-like. They're not particularly hard or pointy, like pine needles.

The branches are then fed into a machine that will strip the small leaves off the branches, and evenly cut them so the tea company can get an even, easy to measure product.

After the leaves have been cut they are lightly bruised, and this is done by a machine as well. They're fed into a roller, and the bruising starts an oxidation/fermentation process.

This way the leaves become that dark orange color, and result in a very flavorful and sweet natural brew.

Once the leaves have been bruised, they're left to cook/dry in heaps in the sun, until they're dried. Once dry, they're ready to be packaged and set to the marketplace.

There is green Rooibos, and the flavor is much less impressive than the oxidized version. These leaves are not bruised, but simply left to dry after being picked and cut. The flavor is much greener, more vegetal, and light.

5. How to brew Rooibos tea

When you're brewing Rooibos tea you need to treat it like any other herbal tea. As in, it has no special time limit like green or black tea, after which the flavor becomes weird.

Instead you can brew it for as long as you like, just remember that after the first 5-6 minutes not much will happen, so you can stop there.

You water will need to be at about 90 C/194 F, which is hot enough to brew the tea, but not hot enough to scald it as well. If you were to use a lower temp water, you would need to add another minute or two to the brewing time.

Your brew should look dark orange, possibly leaning towards red.

6. Does Rooibos tea go with milk ?

Yes, Rooibos tea does go with milk ! Very much so, especially since it compliments the tea's natural caramel/vanilla tones.

One of my favorites is caramel Rooibos, with bits of actual caramel mixed in with the leaves. Add to that a couple drops of milk, and you get the perfect late Autumn tea.

Even if you get a plain Rooibos tea, you can still add a bit of milk (of any kind) and it'll be great on its own.

No, Rooibos tea has no caffeine to speak of. The Red Bush plant this tea comes from does not produce any caffeine, hence there is no natural caffeine in Rooibos tea.

If you buy a box of tea, it says Rooibos in big, bold letters on the front, and then states a caffeine content, check the ingredients. The caffeine is added, either as an extract, or through some black/green/white tea that naturally contains caffeine.

And if it is added, the tea should explicitly state how the caffeine ended up in said tea.

8. Does Rooibos tea make you sleepy ?

Most of the time you'll find bedtime teas containing Rooibos. Now, this is because of two reasons.

First, Rooibos is a very pleasant flavor and is very easy to drink. This makes it a good choice for drinking a liquid that warms you from the inside, thus producing relaxation and a bit of lethargy.

Second, Rooibos both blends in and partly masks many of the ingredients found in bedtime teas. Like for example valerian, which is a natural relaxant but smells/tastes weird. Rooibos masks that, and allows you to drink valerian extract without wrinkling your nose at it.

There are other such ingredients, but that's the most obvious example.

It's slightly relaxing, though not like lavender, but it has no special sleep-enhancing properties. It's just a very pleasant tasting tea that makes it easier for you to drink something warm before bed. 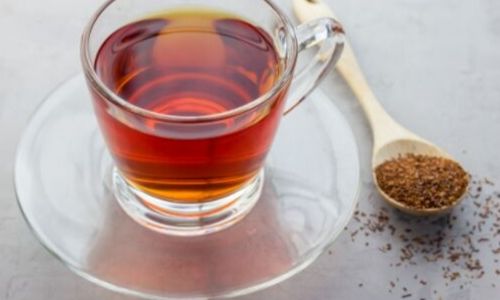 No, Rooibos tea does not contain any tannins. This is because it's not made from the Camellia sinensis plant (like black, green, white tea), which naturally produces tannins.

No herbal tea (like mint, chamomile, strawberry, lemon, cinnamon, etc.) contains any amount of tannins, since those are formed through a very specific process, and it does not happen in herbal teas.

Conversely, this also means that Rooibos will not stain your teeth in time. Yes, it does have a dark orange color when brewed, but it's not the kind that will stain or remain on your teeth after prolonged use.

So no worries, you're safe.

Rooibos tea has a few health benefits, chief among them being just how high in antioxidants it is.

Now, it's not as high as green tea or matcha, but it's still respected for it. It's also caffeine free, meaning it won't interfere with your sleep and won't have the associated drawbacks of high-caffeine beverages.

It's also a tea safe enough to give to small children or very elderly people, since it will not disrupt their metabolism.

11. What are some Rooibos tea side effects ?

Very few side effects have been found for Rooibos tea, and it's really one of the safest teas out there.

However drinking large amounts of Rooibos daily seems to have a slight effect on hormones, so those with hormonal imbalances could possibly see an effect form Rooibos tea. Those were rare cases, but still worth mentioning.

Very few people go overboard with tea, so you're most probably safe.

Rooibos tea is one of the best teas out there, and seems to be the favorite for many bedtime teas. It's got a rich, caramel-like flavor that's a hit with many people.

It's a safe tea that practically anyone can enjoy.

« 6 Things You Need To Know About Green Coffee
Beginner's Guide To Black Tea (Everything, Explained) »