Got yourself a nice tea and would like to add some milk to it ? Or maybe you've heard of the English custom of adding milk to black tea and you'd like to know what kind of milk to use.

Let me help you out here, since I've had milk in my tea ever since I could remember. I'll provide vegan and non-vegan options as well, so I think everyone will be covered. 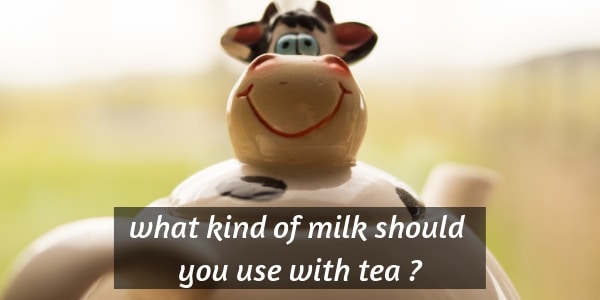 So what kind of milk would go great with tea ?

Any milk you like would be fine, though I would recommend staying away from skimmed milk since it can make your tea taste too watery.

Whole milk would be the best option for non-vegans, since it retains a bit of creaminess from the full fat. Do not use actual cream though, since it will be too strong and your tea will taste funny.

For vegans, as far as I've tried almond milk seems to be the best bet since it's a thicker milk than others. Possibly cashew would be another option, since those tend to be creamy.

We'll discuss all the options in this article, along with what kind of teas take milk in the first place. But first, the cream.

Never put cream in your tea

Never add actual cream to your tea. This goes for coffee as well. You'd have to put in a very small amount of cream to avid your drink from getting oddly sour, in a way that's not very welcome.

This is because cream is just to high in fat to work very well in tea. Often you'll find your tea's just too heavy if you add cream.

What do I mean by cream ? I do not mean creamer, the 10% milk used for coffee. I mean actual cream, the liquid kind that's meant for cooking or adding to sauces.

In some cases I've used the liquid whipped cream. It was a very bad idea.

Please stay away from cream, even if it says low fat. It's going to be too heavy for tea, and even coffee.

Whole milk is the best version for non-vegans

If you love dairy, then whole milk's going to be your best bet with tea. If you're not squeamish, and you could find a farmer nice enough to help you out, fresh cow milk would be the best.

As long as the animal is healthy and the udders are clean, fresh, whole milk's going to be great in tea. It smells a bit, yes, but it's the tastiest milk.

We used to have an old lady delivering this kind of milk to us every other morning, from her cows milked that morning. She would make rounds in our neighborhood, and carry a small wagon of milk with her. It was always fresh, and was very welcome.

If you're not into whole, fresh milk then sterilised milk is the next best thing. This is fresh milk that's been boiled and then left to cool.

In this kind of milk you'll notice the cream I was talking about a few lines earlier. It's a darker, yellowish kind of thick liquid that rises to the top of the milk. Always delicious, just not in tea.

The sterilised milk's got a lower fat percentage than fresh milk, but it's still higher than the 3.5% UHT version.

And, if sterilised milk's not your thing either, or you can't find it, then UHT in the highest percentage is the best thing. If you want actual milk to put into your tea.

If you want just a small amount of milk, just a splash, then you should look for creamers. That's 10% UHT milk, and it comes in very small sealed cups.

Normally you'd use them for coffee, but they're great in tea as well. They usually come in packs of 10, and make a whole lot of noise when you handle them. 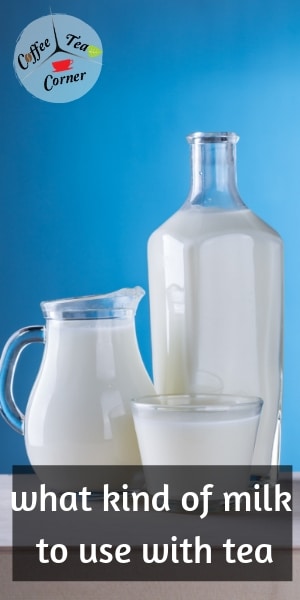 Almond milk seems to be the best vegan option

If you're vegan and would like a vegetal option, then there are quite a few.

I've tried several almond, rice, soy, and vanilla milks. In my opinion almond milk is great in tea and coffee as well, if you like almonds (I do).

And it's also a creamier milk compared to other nut milks, and it takes well to many kinds of tea flavors.

Rice milk provides a certain saltiness and malty taste that I personally like, but I know not many people are into that in their tea. It's not a very creamy milk, though. There's quite a few almond-rice milks out there, so I'm sure there are good compromises to be found.

Finally, cashew milk I think would be the best option. This is because it's a heavier, creamier milk than others (especially soy) and would replicate cow milk texture well enough.

If you can find a whole version of these milks, I think that would be in your best interest. At least in terms of taste, I mean. And I;m sure there have to be nut milk creamers out there, same as there are dairy creamers like I discussed above.

What about the teas, though ? Which teas would go well with the milk we talked about ?

In truth not all teas can handle milk. Actually few tea types are alright with milk. The green tea is too astringent and grassy for milk, white tea is too delicate and fine for milk.

Pu'er tea is too fermented, oolong has too good a flavor profile to ruin with milk. Herbal teas don't go well with milk either.

Black tea however does go well with milk. You'd have to find a stronger kind of black tea, like an Assam for example. Or a Darjeeling second flush.

These are stronger, malty black teas that can stand up to milk and sugar as well.

Your tea will end up fairly orange, and it would be a very delicious tea indeed. Expect the black tea to peek through, since it can cut through milk fairly well.

I would not recommend a flavored black tea to use with milk though. Unless it's a black tea that's blended with caramel or vanilla, which would usually go well with milk.

Another tea type that goes wonderfully with milk is rooibos tea (or red tea). This is a tea type that's actually herbal, and it comes from South Africa.

It gives a deep orange-red color to the brew, and has a very pleasant caramel-like taste on its own. I don't even add sugar to rooibos teas. If you've got a simple rooibos, then that will take milk well enough.

But if you've got a vanilla or caramel rooibos ( I did a few years ago) then milk is only going to make everything tastier. I recommend this combination, it tastes very much like liquid caramel but with less calories.

I've used coconut milk in my coffee, but I know it would be a terrible idea to use it in my black tea. Maybe someone would like that. But I know just by knowing the taste of black tea and coconut milk that I wouldn't enjoy the combination.

So try and use your imagination, and see which would seem like the best possible idea out of what I've discussed here. I'm sure you'll find at least one option good for you.

If you want to go the traditional route, the fresh whole cow's milk would be the milk to use.