Home » Coffee Drinks » Is There Caffeine In Cappuccino ? Here's The Whole Story

Wondering if your cappuccino is a little weak ? Does it even have caffeine in it ? In theory, all cappuccinos are the same. A certain recipe, with a certain caffeine content.

But are you always going to find the same cup everywhere ? No, not really, So let's see if cappuccino is meant to have caffeine in it, how it's meant to be made, and how you might find it made in some places. 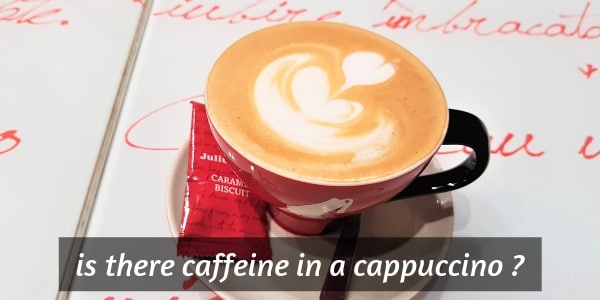 So does cappuccino have caffeine ?

Yes, cappuccino has caffeine in it. On average a 6 oz cappuccino has about 120-170 mg caffeine, depending on how strong the coffee was used in making the drink.

Let's take a look at Starbucks, for comparison. A basic cappuccino is 75 mg of caffeine for 8 oz of drink. It uses one shot of espresso.

A 16 oz cappuccino uses two shots of espresso, bringing the caffeine up to 175 mg.

The caffeine in cappuccino is dictated by how much caffeine is in the espresso used to make cappuccino.

Even if you order a decaf version, it will still have a very small amount - less than 3% of the espresso content used.

This means that unless you're getting your cappuccino from a very shady place, it should indeed have caffeine in it. How much caffeine will depend on what kind of espresso shot was used.

That depends on how the cappuccino is made, how large you ordered it, and what level of caffeine you're used to. Let's talk about all of that for a bit, so you can see the whole picture.

How much caffeine is in a cappuccino ?

If your barista made your cappuccino as a regular one, you'd have 120-170 mg of caffeine in a 6 oz cup of cappuccino, unless more coffee is added.

Normally a cappuccino is meant to be: 1 shot espresso in a 5 oz/150 ml cup, and the rest is filled with foamed milk. The foam on top is meant to be about 2 cm thick (a little under an inch), and sometimes it might be sprinkled with cinnamon or cocoa on top.

When you look at a shot of espresso on its own, it's got a whole lot of caffeine for such a small body. But in truth, it's a little less than what a usual filter coffee in a 8 oz/226 ml mug will offer.

Basically the espresso is a very small and concentrated coffee essence.

That being said, espresso does come in 3 sizes. And each size will have its own caffeine content variation.

I won't get into the specifics of each espresso shot type, I'll leave that for later.  But I will tell you the basics, and insist on the usual one that cappuccino uses (the normale shot).

The smallest and strongest is ristretto with half the water of a usual one, then comes the normale that's the most common one. It's what cappuccino is usually made with, unless you order it different.

And there is a a longer one called lungo, with the same amount of coffee grounds but double the amount of water than the usual shot.

Do keep in mind that cappuccino uses a lot of steamed milk, so that will make your drink longer than the size of an espresso. The caffeine content is absolutely the same as you started with, but it will be distributed in a larger drink.

If you're looking for less caffeine, I suggest ordering a decaf. If you order a coffee with lots of milk, the caffeine content is still the same if you intend to drink the whole thing. Unless you're throwing it away after a few sips, which I doubt.

The coffee type you use will dictate the caffeine content

What kind of coffee your use for the espresso will change the amount of caffeine in your cappuccino. This is not going to be under your control all the time, since not every cup of cappuccino you drink will be made by you.

But, you can always ask the barista what kind of coffee bean blend they're using.

To get a grip on this, you should know there are 2 very important coffee bean types. These are the the main ones the other beans are derived from, and they're called Arabica and Robusta beans.

The Arabica bean is what is used across the world in most coffees, because it's got a much milder and pleasant coffee taste than the Robusta. It's usually a bit sweeter, not as bitter, and can develop a few flavors on its own - like becoming a bit floral or chocolatey depending on where and how it's grown.

Most people enjoy Arabica, and this is what you will usually find in the supermarket. Sometimes it's blended with Robusta or other subspecies, and sometimes it's 100% pure Arabica.

In terms of caffeine Arabica is about 1.5 % caffeine, while Robusta beans have almost double that amount - that's 2.7% caffeine content.

As for Robusta, that's what most espressos are made out of. It's a much darker and stronger coffee bean than Arabica, and its taste is more bitter. It has less sugars and fats in it, but it seems to produce a better crema on top of an espresso.

So if your espresso was made with a Robsta bean, then the caffeine content is higher than with an Arabica bean. But, it might be made with a blend between the two. If you absolutely need to know, check the bean you've bought or ask the barista what kind of coffee they're using.

Cappuccino has a certain espresso to milk to foam ratio

When it comes to making the right cup of cappuccino, you're faced with a ratio issue. Most cappuccinos come in a 5 oz cup, that's 150 ml and what's more important is the ratio of coffee to milk.

Unfortunately no one can really agree on the exact ratio. For example Illy (famous coffee brand) recommends a 1:3 (almost 1:4) espresso to milk ratio, and the rest is topped off with milk foam.

Others on the internet might suggest 1:2 espresso to steamed milk, including the 2 cm layer of foam. It really gets confusing after a while.

The general consensus seems to be that for a good cappuccino, you should aim for a 1:4 espresso to milk ratio, allowing the foam of the steamed milk to fill up the rest of the cup.

The most important thing about a cappuccino is that the coffee should shine through the milk, but have a smooth, velvety taste to it. This means using a higher fat content milk, which will give a better taste and a much creamier steamed milk.

So if you're making a cappuccino at home, you're going to have to mess with the serving sizes a bit until you find what you like best.

For example I had a cappuccino just the other day, and it was a medium sized cup. There was quite a bit of foam on top, and I could definitely taste the espresso in the drink. Here it is.

In terms of taste it really did seem to be a 1:4 espresso to milk ratio, and the rest was milk foam on top. Seeing as I ordered it a a coffee shop owned by an actual coffee brand, I'm going to trust that they know what they're doing and use this as a comparison for any cappuccinos I'd make at home.

So if my cup was 150 ml, of which ⅘ was steamed milk and foam, the the rest was espresso. That's 25 ml of espresso, which should get me to the 120-170 mg or caffeine I was talking about earlier.

There are a few variations on cappuccinos

Now if you'd like a milkier version, then you're probably going for a latte rather than a cappuccino. That's basically a shot of espresso with mostly steamed milk, and quite a bit of the foam on top.

If you like a stronger coffee taste, and thus less milk but still with some foam, then you'd end up with a macchiato. That's usually served in a smaller cup (about a 3 oz/100 ml) and is fairly strong.

These are all made with just one shot of espresso, so if we're using the general interval of 120-170 mg/0.004 - 0.006 oz of caffeine in a shot of espresso, then your drink will have exactly that much caffeine. 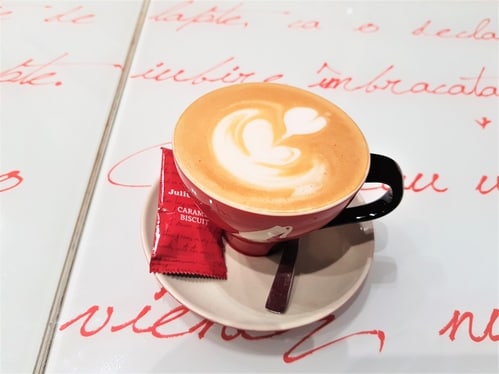 Unless you're doubling or tripling the espresso shot, which doubles or triples the amount of caffeine in your drink.

So, it all comes down to exactly how much espresso you like in your cappuccino. You can always order a double cappuccino if you're looking for more caffeine.

Unless you're getting your cappuccino from a small pack - instant coffee, I mean - your drink should have quite a bit of caffeine in it. For the most part the instant coffees and instant mixes like 3 in 1 have very little caffeine in them.

So if you're getting your drink properly, then you should get the equivalent of an espresso.

Now this can vary from coffee place to coffee place, from country to country since cappuccino is not heavily regulated. But it won't vary too wildly from place to place.