Most folks know of herbal tea and green tea. Some might use the names interchangeably.

But are they really the same ?

And, if not, what are the main differences between green tea and herbal tea ?

If you're a newcomer to tea, then this comparison post is meant to help you better distinguish between green tea and herbal tea.

First, let's start with the most common question to clear up any misunderstandings. 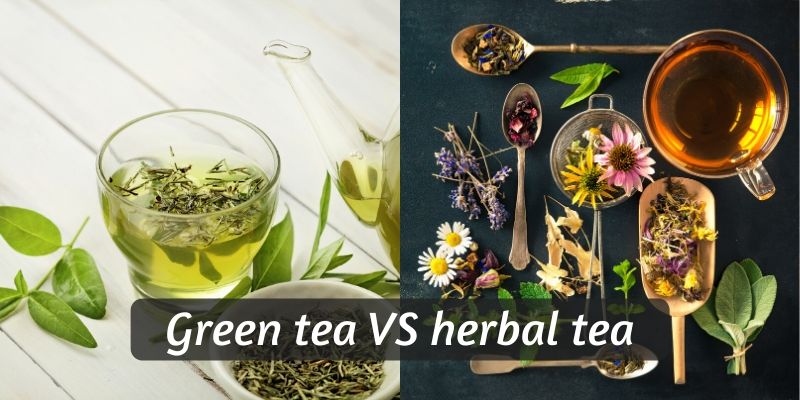 Herbal teas are very different from true teas. While a herbal tea is made from dried herbs, spices, flowers, or fruits, true teas are only green tea, black tea, white tea, oolong, and Pu'erh. All true teas are made from the Camellia sinensis plant.

There is a clear difference between green an herbal tea. Green tea is made from a specific plant, and herbal tea can be made from any plant.

Green tea has caffeine, while herbal teas are caffeine free.

These are the main differences, though more are covered in this article. Read on to find out.

No, green tea is not herbal tea. You might argue it's a kind of herbal tea since it's made from a plant, as all herbal teas are made.

But, green tea is made from a specific plant. The tea plant, Camellia sinensis.

This sets it apart from herbal teas, since all teas made from the Camellia plant are named true teas. All other teas are tisanes, or herbal teas.

Why the confusion then ?

Well, it has to do with the fact that most folks just say 'tea',  whether they mean green tea or black or herbal or any other type of tea. Unless you're a little versed in tea, you won't really be able to tell what someone is talking about if they don't name the specific tea.

This confusion is usually cleared up once you get to know the tea types better.

Now that we've settled that green tea and herbal tea are not the same, let's discuss a few key differences between them.

Alright, so what are those plants we're taking about ?

First, the plant all true teas are made from is Camellia sinensis, otherwise known as the tea plant. Do not confuse with the tea tree that grows in the Southern hemisphere and South Asia.

Camellia sinensis grows more as a shrub than a tree, and is native to East Asia, namely China.

The Chinese were pretty much the first to figure out tea, and from there the practice of processing tea leaves and drinking the brew made from them established itself as a habit.

Herbal teas are made from nearly any plant you can imagine. Such teas include mint tea, sage tea, chamomile tea, rose tea, lavender tea, and so on.

Teas made from dried fruit are also considered herbal tea, such as cherry tea or apple tea. And so are teas made from roots, like valerian root tea or ginger tea.

Naturally, there's going to be a big difference between the two tea types, since they're made from very different plants.

2. Herbal tea has no caffeine, green tea does 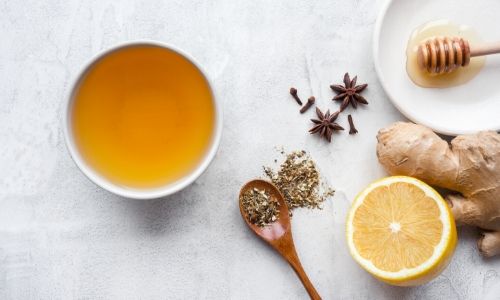 What you'll find in green tea and not in herbal tea: caffeine.

Green tea is a well known source of caffeine, and it's the preferred choice for many folks, mid-afternoon when the 2 PM slump hits but they don't want to drink coffee.

For this reason green tea can be your best friend, or something to avoid, depending on what you're trying to do.

If you're trying to keep awake and stay focused, but without the jitters, then green tea is the say to go.

But if you're just looking for a nice cup of tea that's going to help you relax, unwind, and generally settle down after a long day then you're better off drinking herbal tea.

You'll never find green tea in a bedtime tea collection or blend, due to the caffeine content.

The only herbal tea in this world that has caffeine is yerba mate. It's usually more caffeinated than green tea, and you won't find it very easy if you're not from the American continent (all of it). It's native to South America and you'll rarely find it elsewhere.

Another important point derived from the plants these teas are made from: they've got very different health benefits.

Green tea is very, very well known as a health drink. It's got pretty much all the health benefits, but the main focus is antioxidants, which branch out into benefits such as:

The list goes on, but those are the most common, and possibly the most important. There's also the fact that green tea has caffeine.

Herbal tea is a different story. Since it's made from a variety of plants, it ends up having a variety of health benefits.

While most plants and fruits offer some measure of antioxidants, none will offer as much as green tea.

And any herbal tea will have a very specific aid it provides.

For example mint tea is very good for soothing muscle pains (internally), and relieving stomach pains. Including those caused by gas or loose stools.

Valerian root tea is a great way to relax and a mild sedative. You'll often find it in bedtime teas, along with lavender tea or chamomile.

Sage tea is great help in curing internal irritations if they are very small. For example in cases of UTI sage tea is recommended, and also for sore throats.

The list goes on, and varies depending on what tea you're drinking.

4. Herbal tea is usually safe for all ages, green tea not so 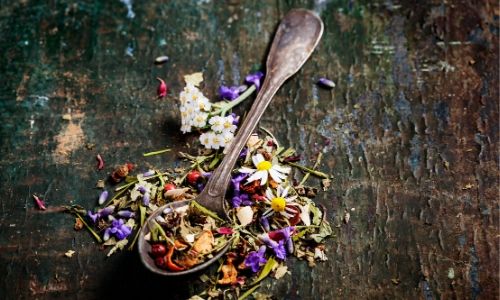 Seeing as herbal tea has no caffeine, it usually has no serious side effects. Some herbal teas might be discouraged for pregnant or nursing women (such as raspberry leaf tea), but most are harmless.

For example teas such as rooibos, mint, chamomile, general fruit teas are safe for pregnant women, young children, and the elderly as well.

Where as green tea is meant to be taken in very small amount by pregnant women, or better yet not at all since it contains caffeine. Young children are not meant to drink it, unless it's a very weak tea. And the same goes for the very elderly.

So this makes herbal tea an all-around safe bet when you're in a sensitive position and want to know which teas are safe to consume.

5. Green tea has a specific flavor profile, herbal tea can be anything

Again, derived from what each tea is made of, green tea will have a very specific flavor,

Actually, pure green tea is not for everyone. It takes some getting used to, since it's not fruity or sweet by any means.

Pure green tea is a little astringent, reminding you rather of green grapes, zucchini and a definite vegetal flavor.

You may sweeten it if you like, but it won't end up being delicious if you're not used to the flavor. Also, adding any sweetener to green tea will hinder the antioxidants from doing their job properly.

Herbal tea comes in two distinct flavor profiles: kind of delicious, meant more for flavor than for health benefits, and the other is almost as harsh as green tea.

For example teas like valerian root or sage or cumin/fennel seed tea are not delicious by any means. But they do a very good job at helping the body through a difficult moment.

Whereas teas made of rose buds, lavender, ginger, cinnamon are all going to be delicious and you might end up drinking them for the flavor, nevermind the health benefits.

Fortunately, you can blend herbal teas together to make a brew that's both flavorful and helpful.

The best part is, you can have the best of both worlds. Often you'll find green tea blended with something else.

This is going to make the green tea much easier to drink, and also add some of the health benefits of the herbal teas added.

Back to the health benefits, both green tea and herbal teas were treated as medicine back in the day.

Green tea as medicine was well documented by the Chinese since ancient times, and herbal tea was mostly known in Europe.

Various herbs were stewed and the resulting drink was meant to help with different health problems, like a cold or indigestion or even more severe cases.

Now, herbal teas weren't always effective in these cases. But they were the precursors to modern-day medicine, in that the effect of certain plants were observed, recorded, and later worked upon to develop what we know today as pharmacology.

It was a long road and full of experiments, but it got us to where we are today.

Nowadays grandmas still make chamomile teas for grandkids when they've got a cold, and they drink ginger tea themselves for a quick pick-me-up.

I know because my own family has a stock of herbal teas which I consistently raided until my late teens.

Green tea and herbal tea are two very different tea types. But they've got a few things in common as well, and knowing both sides will help you when you need to select a tea.

Most of the time I go for herbal tea, since I drink a lot of it during the day to stay hydrated, and it's delicious as well.