Sage tea is one of those herbal teas you won't really drink until you need to. But when you do drink it, you'll wonder why you never gave it a chance in the first place.

Vaguely minty, slightly bitter, and with a hint of lavender, sage tea is very refreshing. And also one of my favorite herbal teas, right up there with mint.

But if you've never had sage tea, or just had 2-3 cups, you'd perhaps like to know more about it. Well then, let's start with the basics. 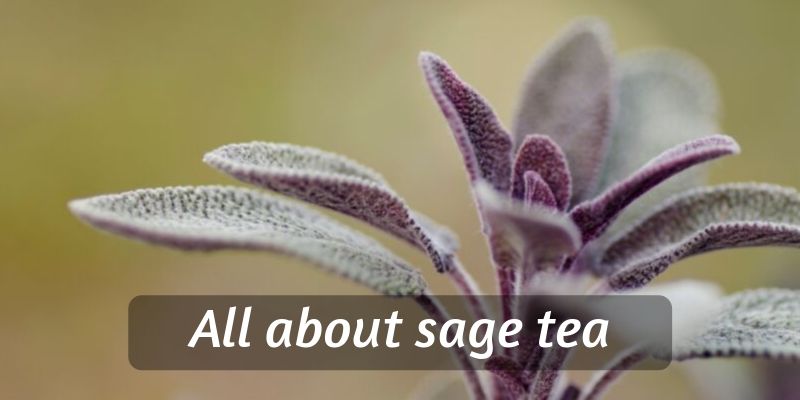 What is sage tea ?

Sage tea is a brew made of the leaves, twigs, and flowers of the sage plant ( Salvia officinalis). It's an evergreen shrub, meaning it's ripe for picking any time of the year.

Usually you'll find sage tea in the form of bulk herbal tea, since it's not very common in commercial herbal teas (like chamomile or mint). It's primarily used for its health benefits, rather than flavor.

But most often you'll find dried sage leaves as herbs for cooking, and they're common in the respect. They add a nice touch to meats, and potatoes, or generally very hearty foods.

Back to the tea itself, you'll notice that this tea is a herbal tea, meaning it's also named a tisane or infusion, and does not naturally contain any caffeine.

What is sage tea made of ? 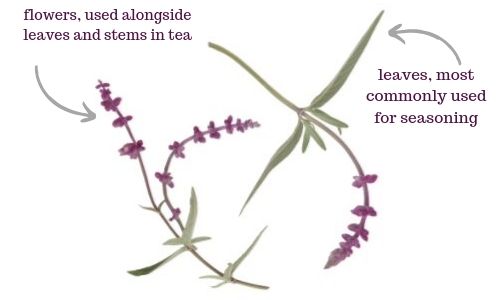 Sage tea is made of the leaves and flowers of the sage plant. The same 'sage' applies to several plants, but the most commonly meant one is the Salvia Officinalis plant, which is the only one with medically accepted effects.

It's been in use since ancient times, sometimes to ward off evil, but most of the time to provide flavor for foods or drinks.

Sometimes, you might find small bits of the stems of the sage plant in the bulk herbs you buy. I've also noticed that the flowers crumble and form a sort of powder, due to transportation conditions.

They're still good for making tea, but this means you should expect some tiny bits of flower at the bottom of your tea cup since the filter won't catch everything (unless you're using paper filters).

Where does sage grow ?

On its own, sage grows in the Mediterranean region, and is most commonly used by countries such as Italy, Greece, the Balkan countries, and you will even find it in Egypt, and it has also extended to Middle Eastern countries as well.

It's fairly often used in British cooking, so it's safe to assume it now grows on the British Isles as well.

The sage plant is part of the lavender family, and as such will grow fairly well wherever lavender does. If you're from the U.S., there are regions that grow sage very well, and thus can get them home-grown.

How to make a cup of sage tea

Making sage tea is easy enough, as long as you know how to brew tea from loose leaves.

What you'll need to remember is that this tea, despite being herbal, can get too bitter if you let it steep for too long. Not nearly as bitter as green tea, but it definitely has a bitter streak when left to brew for 10 minutes.

So when making a cup of sage ta, you will need:

You'll first need to heat the water to the according temperature. Herbal tea can tale boiling water, but there's no reason to scald it and there is a taste difference. It's just not as bad as burning regular tea.

Still, do yourself a favor and let the water sit (off the heat) at least 2 minutes after it reaches the boiling point. Always heat your water on the stove with a kettle or a pot, not in a microwave.

This will ensure you get an easier transition from one temperature to another, and evenly heated water. Letting it sit for 2 minutes will allow it to cook down several degrees.

Prepare the tea leaves. Add them to the tea ball, r to the filter, or you can even put the in the heated water and let them sit there, and then strain them. As long as you've got a good way of straining the leaves, it doesn't really matter how you do it.

I've found that the best way to brew tea is with a dedicated tea mug, preferably one that already has a strainer built in, or easy to insert and then remove when you want to drink the tea.

A tea mug such as this one by Sweese is going to provide you with exactly what I was saying. It's made of a porcelain cup, one metal filter that is inserted into the cup, and one porcelain lid to keep the drink hot (and can double as a coaster).

It's a large-ish cup, as in it can hold up to 15 oz of brew. But you have to allow some room for the filter when it's got tea leaves in it, so you will get something like 13-12 oz of brew in the end.

The tea mug comes in several colors and patterns, and you can find the listing on Amazon here.

Steeping the sage should be a 5 minute thing, otherwise you'll be getting that overly bitter taste which can't be tamed with milk. You can add sugar though, or honey, and it will be a great flavor enhancer.

Adding milk or creamer isn't really something feasible with this tea, since it's got a flavor profile much like green tea. A bit astringent, and very herbal, meaning any milk you add will just taste off with sage tea.

In terms of taste, sage tea isn't for everyone. It's from the same family as lavender, so it will resemble it in flavor a bit. Slightly floral, with a deeper tone.

A bit bitter, but not in an undrinkable way. It's just something that comes along with the general flavor of sage, much like with bay/laurel leaves.

It can also taste slightly minty, as in just the flavor of a mint herb, without actually making your mouth think you've had mint tea, It has no menthol, and will not feel like chewing gum, for sure.

Sage is a nice taste, especially if you add a slice of lemon to your tea, or a bit of mint and thus make it even healthier. And given how it's usually intended to treat sore throats and help clean and close small wounds and cuts, the help of lemon is especially welcome.

You can take a look at this loose leaf, crushed sage that comes from Frontier. It's a 1 lb bag, and it will serve you a couple hundred cups of tea, if not more.

Since this sage is also rubbed, the texture allows it to bland into food as well, if you plan to also cook with it. The health benefits will be present even if you ingest sage as a food.

Keep in mind that the full sage leaves, before drying, have a lot of tiny hairs on them and you might find those in the bags as well. They're safe to use, so do not worry.

Upon opening you should be hit by a smell like lavender a mint herbs.

What is sage good for (benefits) ?

Some benefits of the sage plant are well known to the general population, but some need some more explanation. It's actually a medically recognized plant, and has several health benefits that have made it useful in medicine. (1)

However all these uses require extensive sage ingestion, either through essential oil, tea, direct ingestion (as a spice or condiment) or local application.

For example sage is useful in cases where there is mild inflammation, as it contains anti inflammatory properties. So for example in internal inflammations, or very small scratches (like UTI) it's a good way to lessen the symptoms.

For the same uses, it also helps that it has anti bacterial properties as well, since it can also be used to alleviate halitosis and keep the mouth clean, like regular green tea.

Sage does seem to have an effect on female hormones, as it's part of treatments to reduce excessive milk flow during lactation, treat painful menstrual cramps, and can also help with hot flashes while menopause sets in. (2)

Canker sores, or any sort of sores and slight inflammations found in the mouth may also be alleviated by drinking unsweetened sage tea. A pilot study asking one group of people undergoing chemotherapy to use a peppermint-thyme-sage tea, while another control groups of chemo patients did not use the tea.

The result was that those taking the tea daily to rise their mouth had a lower occurrence of sores inside the mouth (which is a common side effect of chemotherapy). (3)

Other effects of sage tea may be that it helps in memory loss associated with old age. As such, it might be useful for people suffering from Alzheimer, since it's a neurological degenerative disease. (4)

About the symptoms of menopause and hot flashes, some studies have actually been done on the subject and come up with promising results. For example on one study of menopausal women, 71 such women were asked to take fresh sage leaf tablets daily, for 8 weeks.

Estradiol deals with forming ovarian follicles, and helps with childbearing, and is the primary hormone that decreases when menopause sets in.

Is sage tea safe to drink ?

Sage tea is safe to drink indeed, especially if you do not drink more than 3 to 6 cups of sage tea per day. (7)

This does not mean that sage cannot have side effects, but rather you need to drink a large amount of sage tea, or ingest sage or sage extract in any way and for a prolonged period of time (several weeks), before experiencing any side effects.

Sage tea during pregnancy or breastfeeding

A very small intake pf sage tea is acceptable for pregnant of breastfeeding women, but care should be taken.

Sage also contains thujone, which may trigger uterine contractions and halt milk production. That being said, one cup a day, every other day is not going to harm the woman or the child.

Prolonged sage tea drinking during pregnancy or breastfeeding may have an influence, which is why you should really consult your doctor before taking sage tea, just to be safe.

Sage tea is a very flavorful herbal tea, and one that's bound to help you if you're ever in need of an antiseptic or anti inflammatory treatment for mild cases.

Replying on it entirely is not a good idea, but taking sage in a pinch before you manage to get to a doctor could help you out.

Aside from the health benefits, there is really a lot to say about the flavor of sage tea. I never managed to drink it for the taste more than a couple of days in a row, and whenever I had a UTI I had about 4 cups per day for a week, alongside prescribed antibiotics.

And a marigold (Calendula officinalis) tea to help soothe pains and close wounds.