If you've ever looked for more than 3 minutes at the tea labels on a supermarket shelf, you've probably seen red and black tea on display. Then some friends said they had red tea, but it was not the tea you know. Then you google the tea types and become even more confused.

What gives ? Why is there a red and a black tea, and why is there such confusion ? Let me explain. 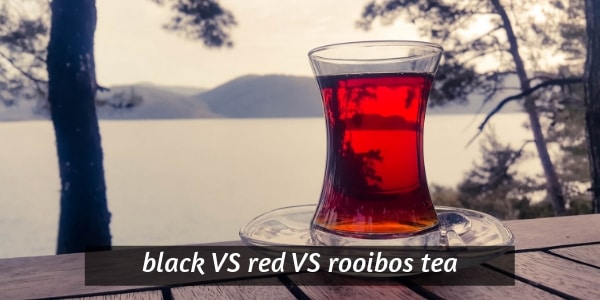 Black vs red vs rooibos tea

In the West, teas are named by their leaf color, while the East names them by their brew color. So black tea has black leaves, while in the East it is called red tea because it has a reddish brew.

Rooibos tea came to the word through the West, thus it was named after the color of the 'leaves', red. The rest of the world calls it rooibos tea, the South African name.

Black tea, red tea, and rooibos teas are often confused because of the various regions in which the teas are found.

This can make things very confusing for those who aren't sure where their tea comes from, and thus could be labeled in a very specific way. And even online when looking up the various tea types confusion can arise, depending on where the info was gathered from.

So let's dive into some specific ways to figure out which tea you've got.

Red tea can mean black tea, depending on where you're from

All teas - true teas, as die-hard fans will tell you - come from the Camellia sinensis plant. The leaves are harvested and roasted, getting to different levels of oxidation, which change the flavor of the tea.

Black tea is the most oxidized or processed type of tea leaf, and it often ends up entirely black. It can look dark brown, a bit reddish, or a very dark green. But most often it will be completely black.

This is what Westerners know as black tea, starting with the British Empire's first encounter with black tea. When they later brought it into Europe it was widely known as black tea, given the colors of the leaves.

Now there are black teas and black teas, some you might like and some you might not. Depending on what they've been blended with they might give you a dark amber brew, an orange-red brew, or even a pale orange one.

It depends on how much the leaves were oxidized too. Higher oxidation gives a darker brew (and a darker leaf), while lighter oxidation will give a lighter color.

Black tea is often blended with other flavors such as bits of caramel, vanilla, rose petals, and so on. They too can influence the final color of the brew.

The Chinese, who love their black tea, know it as red tea. They focus on the color of the brew, and they are right to call it red tea as well. Confusion arises when buying Chinese tea sometimes, especially the one that's not meant for export since it can be labeled as red tea.

Rooibos too can be red tea, depending where you're from

Then there is the rooibos tea. Personally I'm a fan of rooibos tea, mostly because it has that wonderful caramel, sweet flavor from the get-go. This is a tea that's not made from the Camellia sinensis plant, but rather a South African bush aptly named Red Bush.

Brewing is very similar to black tea, in terms of steeping time and temperature. But the plant is a completely different one.

There is also no caffeine in rooibos tea, which means it's a wonderful bedtime tea to begin with.

Rooibos too produces a red tea, but with less color variation. You'll find rooibos in all kinds of blends. For example my personal favorite of rooibos with bits of caramel, and it takes wonderfully to milk and sugar.

The main reason rooibos isn't widely known as rooibos is because of the Westerners, again. Seeing as the West was focusing on the leaf color, when rooibos showed up with its dark red twigs it was immediately branded as red tea. Especially given how red the brew looks.

This can be very confusing when a Westerner, who only knows red tea as the rooibos tea, talks teas with someone from an Asian country. They could be talking about different teas, and neither of them could know it.

The fact that not all tea houses or brands are very specific about their teas doesn't help either.

There are differences between black and rooibos teas

So you know that there is black tea, there is rooibos tea, and both can be called red tea. Confusing. But what are the differences between black tea from the Camellia sinensis plant, and the rooibos red tea ? Well, let's go through a few of them.

Seeing as black tea comes from one plant, and rooibos comes from a different plant, they have different properties. For the most part, both these teas have antioxidants, with rooibos tea coming out on top (by a little).

While black tea is mainly used as a substitute for coffee, rooibos tea is more of a calming brew. This is because rooibos contains no caffeine whatsoever, and it's in the herbal tea category right up there with peppermint and chamomile and rose petals.

The processing of a rooibos tea and a black one are different things. Black tea can only become a black tea if the leaves are picked at a certain time in their life (when they are adult leaves), and then roasted into a darker color, to bring out the darker flavor of the leaf.

A lighter roast gives a different taste, and a younger leaf will land you closer to green tea territory.

Black tea (and tea from the actual, true tea plant) is very exact and finicky. Get a step wrong and you'll have a different tea. Not a bad one, but a different one.

Rooibos on the other hand is picked, cut, then placed in a low heap. That heap is wet, and will ferment for the next few hours, and then be left one to dry in the sun. This whole process takes 24 hours, and give rooibos its sweet taste and red color.

These two plants also grow in very different regions in this world. Rooibos is an African plant (bush, actually) and it requires mostly dry and warm conditions to grow well.

The tea plant (Camellia sinensis) is a very sensitive plant, and does not do well in direct sunlight. It has certain harvesting times in the year, and it grown mostly in Asia, and at higher elevations with a humid and warm kind of weather. 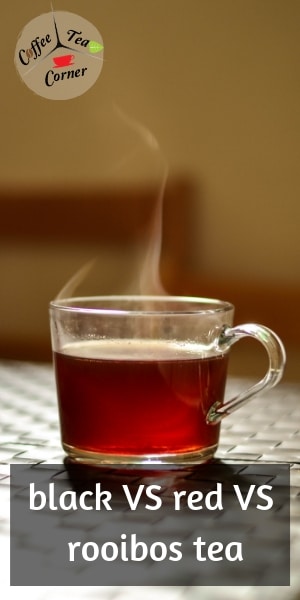 They taste very very different, although they take almost the same blends

Black tea has more tannins than rooibos, and as such can actually become bitter in some cases. Especially of you brew it wrong or the leaves are of poor quality. This kind of tea has a darker, earthier kind of taste.

Rooibos tea is inherently sweet. Not like it's got natural sugars, but it leaves a sweet aftertaste, even if you never add any sugar to it. It's more of a fruity taste, and a bit of caramel too.

That being said, these two teas often have the same added flavors. For example vanilla is a common blend for both, caramel too, and cream and sugar go very well with black tea and rooibos tea.

As for fruity blends, rooibos I've usually seem with milder, softer kind of fruits like peach or mango or strawberry. Black tea I've seen and sometimes had with citrus or pineapple, so a more acidic kind of fruit.

Both are incredibly good when blended with something else, but they give you a different experience. A rooibos caramel cup of a black tea caramel cup will be different. The rooibos has that sweet, creamy caramel flavor, while the black tea cuts a bit through the caramel and gives you a fresher taste.

Black tea is not suitable for infants, rooibos is completely caffeine free

Given the high tannin levels, black tea is not suitable for babies and can actually interfere with some medicine. This is also because of the caffeine content of black tea, which can range between 40-129 gr (0.0014 - 0.004 oz) of caffeine per 226 gr/8 ounces of infusion.

The very elements what can help black tea in weight loss will not sit well with a baby's stomach.

Rooibos on the other hand is completely caffeine free, and has a much milder taste. As such, it would be okay to feed to a baby, but only in very small amounts. It should not ever replace a mother's milk. But it can be give, unsweetened, in the bottle instead of water every now and then.

The naturally sweeter flavor of rooibos will also sit better with the child, seeing as he/she will take to it faster than to a black tea.

I hope I cleared up the confusion between black, red, and rooibos tea. We're so many people out there and we all different names for the same thing sometimes. Confusions happen sometimes.

When is important to know though, is that both rooibos and black tea are wonderful, but they serve different purposes, and not everyone will like both. For example my boyfriend loves a rooibos/caramel blend, but can't stand a black tea/caramel blend. He doesn't much like black tea, actually.